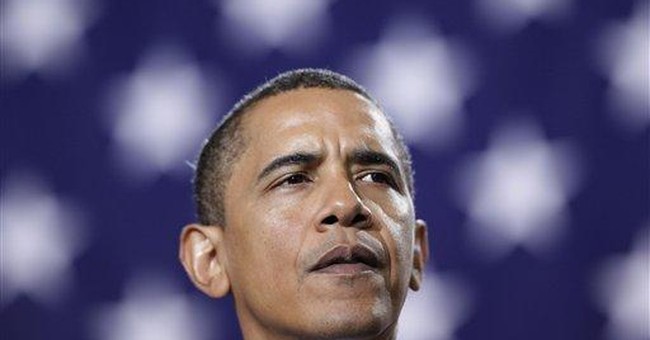 It’s socialized medicine vs. the private sector. How does the former match-up to the latter? By way of an ill-advised postal services analogy, our inspired President Obama has gaffed upon the answer: “UPS and FedEx are doing just fine,” he observed, “It's the post office that's always having problems.”

Priceless – From the mouths of libs…

Speaking of “Federal Express:” Was there ever any doubt as to why the left’s government takeover of health care absolutely, positively had to be there overnight? Dr. Obama, Nurse Nancy and the rest of the congressional candy-stripers recognized that if Americans had a chance to actually vet this medical monstrosity, they’d rise-up against it.

Oops. We have and we have.

But despite a nose-dive in support, the Democratic Party’s ObamaCare Kamikazes refuse to pull-up. Instead, they’re unloading both barrels, hell-bent on sinking the U.S.S Free Market and taking our liberties, quality of care and American exceptionalism down with it.

Pelosi has disgracefully implied that town-hall goers who question this radical experiment in socialized medicine are Nazis. And in an August 10 USA Today op-ed, she and Rep. Steny Hoyer (D-MD) shamelessly labeled those same heartland patriots – many of whom are senior citizens – as “un-American.”

But what is “un-American” is the socialist piece of Euro-trash being peddled as “healthcare reform.” This is not the “hope and change” America envisioned while punching Obama’s chad last November. He and liberals in Congress have betrayed their nation’s trust.

At nearly 1,100 pages, even the President admits he hasn’t read H.R. 3200 – the House version of the bill – and supporters like Rep. John Conyers (D-MI) have ridiculed the very idea that anyone would.

Well, some of us are reading it – silly as we may be.

Liberty Counsel’s Washington D.C. staff (www.lc.org) has compiled a comprehensive bullet-point summary of the bill. It’s gone viral and Americans are arming themselves with the information it provides. They’re taking it to town-hall meetings around the country and are respectfully, but firmly holding their Representatives’ feet to the fire.

“What Americans Need to Know About the Healthcare Takeover” provides a link to both an overview of H.R. 3200 and the full text of the bill so that people can verify for themselves the overview’s accuracy. This is democracy in action and it’s making the left mouth-foaming furious.

ObamaCare is fatally flawed on numerous levels, but, for now, let’s focus on just a few:

First, despite ludicrous denials by both an increasingly partisan AARP and a “snitch on your comrade” White House, pages 424, 425 and 426 of the plan do, in fact, mandate compulsory government “end-of-life” consultations for seniors who have “not had such a consultation within the last 5 years.”

According to the bill, these consultations “shall include…an explanation by the practitioner of the continuum of end-of-life services and supports available, including palliative care and hospice.” (Or, as President Kevorkian put it, instruct you that: “Maybe you're better off not having the surgery, but taking the painkiller.”)

Again, these are mandatory consultations. The word “shall” is a legal term of art that means – for lack of a better word – “shall.” Notwithstanding White House and AARP claims to the contrary, “shall” does not mean “may,” “can” or “have the option to.”

So, in the interest of candor and for the sake of clarity, let’s call ObamaCare’s mandatory “end-of-life counseling” what it truly is: “End-your-life” counseling. Better yet, let’s call it the “Useless-Eaters-Get-Out-of-the-Way-and-Just-Die-Already” provision.

Next, we have Sec. 163, pages 58 – 60 which – whether you like it or not – grants federal bureaucrats full access to both your private medical records and personal bank account for automatic fund withdrawals.

Here’s how it works: In order to “standardize electronic administrative transactions,” the government issues you a handy-dandy “machine-readable health plan beneficiary identification card” to “enable electronic funds transfers” from your private bank account.

But lest you worry about having to deal with any of those pesky “choices” or confusing “decisions,” Uncle Sam promises to “be authoritative, permitting no additions or constraints for electronic transactions.”

Got that? Our “authoritative” federal government will not permit you to place any “constraints” on its access to your bank account. (Yea! Big Brother’s got your back! How could anyone be opposed this kind of government coddling? One question, though: Will Uncle Sam pick-up our NSF fees?)

And then there’s the “Health Benefits Advisory Committee.” This lovely government appointed panel of bureaucrats is to consist of “medical and other experts” who get to “recommend covered benefits.”

Other experts? What in the Rahm Emanuel is that supposed to mean?

Grandma neither wants – nor can she survive – a liberal Democrat appointed, “one size fits all” panel of distinguished experts in the field of “other” deciding what medical services she will or will not be allowed to receive. We’re not numbers on a page, Mr. President. We’re people.

But this brings us back to the aforementioned threat of “standardization.” As with every socialist nation that has adopted its own version of ObamaCare, standardized, universal healthcare, is – and always will be – an abysmal “healthcare rationing” failure. It’s no longer you and your doctor deciding what’s best for you and your family; it’s Big Brother.

Keep in mind; we’ve only covered three provisions, here. H.R. 3200 is nearly 1,100 pages of wonderfully ambiguous little nuggets just like these, which grant the government unlimited loopholes to do whatever it pleases with your life and well-being.