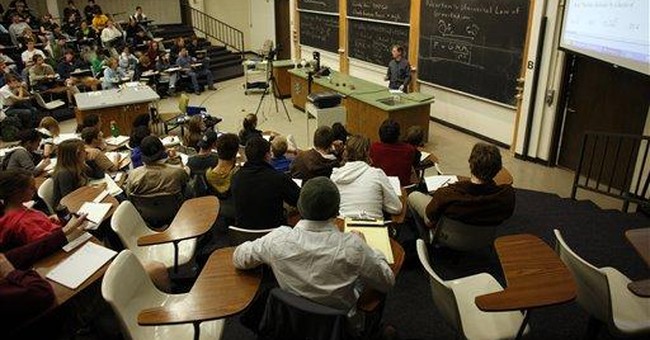 Collaboration, or working in groups, is a favorite pedagogical strategy of hung-over graduate teaching assistants, soviet indoctrinators, educators with advanced degrees, and social studies teachers too dumb to do anything else.

Unfortunately, by what I saw at the National Council for the Social Studies (NCSS) conference here in Atlanta, most social studies teachers are either wicked indoctrinators or too dumb to know that they are carrying out the wishes of the Dr. Evils in education, i.e., those with Ed.D.s who are administrators, curriculum devisers, and education professors.

Teachers seem to love “group work.” It gives them a sense of power over children and allows them to catch up on Facebook or their nails.

I have college students coming to class expecting to spend class time sitting in little groups to discuss their “feelings.”

Today, students don’t expect to learn—especially from a teacher or professor.

Instead, they expect to “do” as in “doing social studies” as I learned by spending two days at the social studies educators’ annual conference. To demonstrate one way social studies is “done” in Georgia a class of eleventh-graders was marched on stage and divided into little groups. The song “Home on the Range” was played for them and they were asked to answer questions about the “feelings” this song evoked in them, and then in various victims and victimizers associated with the settling of the American West—miners and mine owners, blacks and whites, Native Americans and whites. The young scholars then proceeded to collaborate, and believing themselves “critical thinkers,” came up with the correct answers! Of course, the bright, young geniuses knew that Native Americans would feel “sad” or “angry.”

While much has been said about politically correct material, little attention has been paid to such emotionally coercive teaching strategies. I saw how it is applied to middle school students as a teacher shared teaching tips for getting tykes to sympathize with illegal immigrants. She used the adult-level propaganda piece Enrique’s Journey in her class to discuss drug abuse, domestic violence, and out-of-wedlock pregnancy. It’s a book that has appeared on reading lists for some of the best private schools in Atlanta—including Christian high schools.

Over the years I’ve seen college students’ ability to reason, analyze, and weigh evidence deteriorate. But this is to be expected when they barely have a minute to themselves, when their material is selected to promote a political agenda, when their teachers bombard them with games and electronic gimmicks, and then put them into groups where the ring leader will cajole them into adopting the correct attitudes.

I’ve found college students afraid to think outside the box of “tolerance” and “diversity.”

Educators use group work because it lends itself to promoting “social justice.” The most threatening thing to a teacher would be a teenager who had read the documents of the founders and the documents they had read, going back to the ancients. First, the teacher in all likelihood is too dumb to understand such documents as the Federalist Papers. He has in all likelihood not been required to read them in education school. Instead, he has been required to take classes in emotionally crippling teaching strategies. (There is a reason that the Dr. Evil-educators in North Carolina wanted to eliminate the teaching of American history before 1877 in high school.)

They have to start with the malleable Americans—young children.

So see all those kids “doing” social studies? They’re not “engaged” or having fun. They’re doing the bidding of Dr. Evils, who are using them as subjects to take over the world.