Huckabee and Modern-Day Clarence Darrows: Inheriting the Wind on Evolution 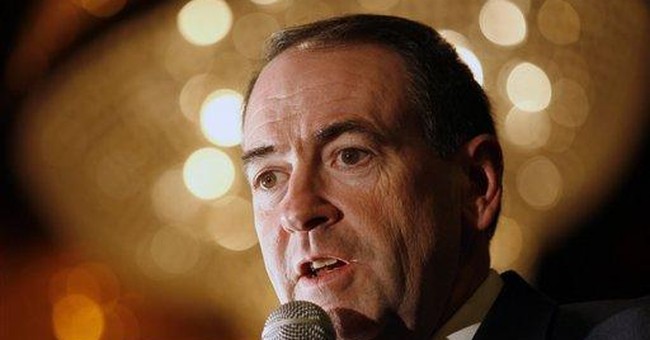 Books attacking religion, particularly Christianity, have earned quite a bit of money recently for publishers and their authors. Pundits are now having a field day attacking Mike Huckabee’s stance on evolution.  Democratic strategist Paul Begala reportedly remarked on CNN on Super Tuesday, “Nobody is more conservative than Huckabee.  He doesn’t believe in evolution or gravity or photosynthesis.”

Those who love to lob such oversimplified charges imply that those who do not accept the doctrinaire theories of evolution as set forth by one explorer named Charles Darwin, a century-and-a-half ago, are relics of the Dark Ages.

The latest Smart Set, however, echo the sentiments and tone of one of their more famous and notorious predecessors, Clarence Darrow.  The schoolteacher John T. Scopes was among Darrow’s defendants.  Unlike Darrow’s other, murderous, clients, Scopes in 1925 was persuaded by the American Civil Liberties Union to simply defy Tennessee state law against the teaching of evolution as it applies to man.   He willingly complied, though his case never reached the outsiders’ goal of making the case a Constitutional test.

The public at large has inherited the terms of the evolution debate as handed down in the play about the Scopes trial, Inherit the Wind.  That was the experience of one of my freshmen, who from his high school English class saw the conflict according to the play’s simplistic and polemical outline: a brave, young open-minded biology teacher fights like David against the mob of small-town, ignorant fundamentalists.  Certainly, the play’s stage directions and the movie version show a town as if in the grips of fundamentalist hysteria: The film opens with a veritable mob of Fundamentalist zombies, singing hymns and waving Bibles.  The town’s minister hypocritically promotes Biblical lessons while treating his own daughter, the fiancée of Scopes, with very un-Christian harshness and coldness.  Clarence Darrow (named Henry Drummond in the play) provides a marked contrast to all this hysteria, by his courtroom demeanor, reasoned arguments, and sardonic revelations of how little the townspeople know.

But what about the real Clarence Darrow?  Is he the spokesman for reason and light against the onslaught of ignorance and fanaticism?

A 1927 book review of his, of the now-forgotten The War on Modern Science, provides insight.  Darrow seems to use the review as occasion to continue the arguments from the Scopes trial.  After quickly describing the purpose of author Maynard Shipley’s project of exposing the campaign of “Fundamentalists”--“to make education and life correspond to the weird fables found in Genesis and other parts of the Bible,”--Darrow launches the attack:

“No more brazen and dangerous attempt to control thought can be found anywhere in history.  The campaign is simply an effort by organized ignorance and bigotry to destroy the learning of the modern world.  Under the leadership of the late William Jennings Bryan [Scopes’s primary antagonist], the forces of ignorance and intolerance were marshalled (sic) from Maine to California, and from Canada to Mexico.”

The review continues in the same attack mode using the rhetoric of a call to arms with words and phrases like “inquisition,” “campaign,” “onslaught against science” by the “half-educated,” “ignorant minority” to deny what in Darrow’s estimation “every scientist in the world has accepted”: that “evolution [is] a fact beyond dispute.”

Similarly, in the play, Darwin is presented as a bold thinker, a daring scientist, whose new, daring truths frighten Bible-thumpers.  But what Darrow and Jerome Lawrence and Robert E. Lee (authors of the play) and most promoters of Darwinism don’t know is that the “bold” and “new” theory of evolution was being promoted more than 2,000 years ago by the Roman philosopher Lucretius.

And Darrow’s fiery rhetoric in this review is not atypical of those like him who are on a mission to wipe out religious influences across the globe.  One of my college freshman students after reading this review jokingly called Darrow a “fundamentalist evolutionist.”  The student is not a Christian.

Darrow’s rhetoric is mimicked in the more recent atheist jeremiads by Christopher Hitchens, Richard Dawkins, and Sam Harris.  A susceptible public, exposed to one side of the debate in public schools, brought their recent tomes—God Is Not Great, The God Delusion, and The End of Faith, respectively--to the best seller lists.

Another perspective that those among our college-educated public will not receive is that of Richard Weaver to whose writing I was introduced while in the master’s program at Georgia State University.  In a seminar on classical rhetoric I found myself the only one in the room supporting the worth of Socrates’ exploration of truth (sophistry being the latest topic of “cutting edge” scholarship).  After several weeks of engaging in discussions where the professor and my fellow students would have forced the hemlock on Socrates (and Aristotle, Cicero, and Quintillian), the professor remarked to me that I was so far to the right that I might even agree with Richard Weaver, on whom he cast fascistic aspersions.  Immediately, after class, I went up to the library stacks and walked out with his volumes in my arms.

Among Weaver’s writings I found his analysis of the Scopes trial in The Ethics of Rhetoric.  The chapter, “Dialectic and Rhetoric at Dayton, Tennessee,” is instructive for its analysis of what was (and still is) at stake in the debate on evolution.  In short, Weaver reveals that the two sides were arguing two different things, with Darrow’s side using rhetoric to promote the “fact” of evolution.  As Weaver points out, rhetoric fulfills its function of persuasion only if the two sides agree on the “facts.”

But more was at stake, as Darrow himself implies in his hysterical review.  And that was the notion of truth.  Dialectic, as in Socratic questioning, as Weaver points out, is “rationally rather than empirically sustained.”  What was at stake for communities in Tennessee was whether it was good that schoolchildren be taught that they descended from apes, rather than being made in God’s image.

This idea, and the whole universe of ideas and values that it carries, still forms the central elements of the debate.  For in the Darwinian scheme, man, as nothing more than an animal with more sophisticated cognitive skills, loses moral imperative and free will.  The notion of sin becomes moot.  And, indeed, in terms of his defense of criminals, Darrow himself utilizes arguments about such environmental factors as poverty, parental problems, and even reading material for some of the most heinous murderers.  Among his clients were the privileged young men, Nathan Leopold and Richard Loeb, who coldly and calculatedly murdered their acquaintance Bobby Franks.

Weaver astutely points to the prosecution’s use of that case, where Darrow used as defense the fact that Leopold had been impacted negatively by reading Friedrich Nietzsche in school.  Darrow had argued that the universities and professors who taught the nineteen-year-old Leopold are “more responsible for the crime than Leopold himself.”  William Jennings Bryan pointed out that the “doctrine” that Darrow and the evolutionists would teach in the schools is the very same one “that gives us Nietzsche . . . who tried to carry this to its logical conclusion” in the idea of the superman.  That Nietzsche’s nihilistic views questioning the very notion of evil could influence a rich young man whose goal was to coldly carry out a “perfect murder” makes sense given the premises.  In the Darwinian view, animals (including the higher animals like man) act according to environmental forces.  That would include not only physical stimuli, but also intellectual stimuli.

And that was what the Tennessee lawmakers objected to: the promotion of Darwin’s ideas as moral guidance.  Weaver argues that Darrow, if he believes that Nietzsche could have a negative moral impact, should acknowledge the same for Darwin.

Even those thoughtful Christian thinkers, like the late Catholic Walker Percy, who see no conflict between evolution and faith, have good reason to be suspicious of the Darwinian view promoted in our schools.  The most strident proponents of Darwinism, such as the philosopher Peter Singer, justify their policies of euthanasia and infanticide by first attacking the Biblical proscriptions against them.  Euthanasia and infanticide, commonly accepted practices before Biblical times, illustrate most starkly Darwinian “survival of the fittest.”  In 1925, the eugenics movement was catching on, especially among the progressive intelligentsia.

Alas, few in our schools or culture at large, given current publications, textbooks and curriculums, will be exposed to what is at stake in the debate--its real history or complexity.  The confusion that Weaver unraveled—that mistakenly held belief that scientific, empirical “fact” can determine decisions of a moral order—remains with us.  This is especially true in the teaching of literature, where pseudo-facts concerning race, class, and gender are mined in polemical “texts.”  Most students will likely get the Inherit the Wind version in their classroom discussions--with biology teachers often promoting themselves as latter-day Scopes’s.  But like all scientific theories, the jury is still out on this one, as many learned proponents of intelligent design affirm.  But that theory is not likely to get a fair hearing, as are not the moral ramifications and implications of a strict Darwinian view of humanity.