Do the President's Appointees Read His Speeches? They Should 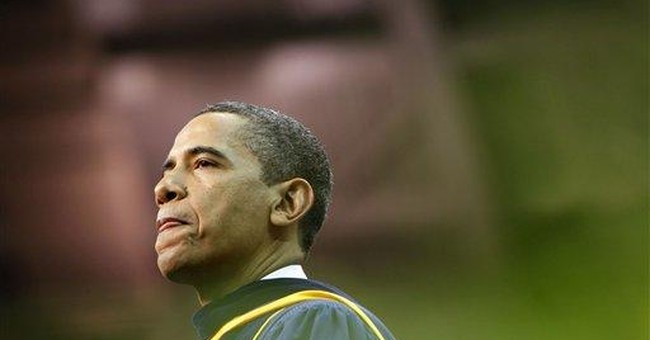 This may come as a surprise to folks who know me well, but I want to go on record as truly admiring President Obama's commencement address at Notre Dame University on Sunday.

For a man who has given many noteworthy speeches and whose oratorical skill is regularly cited, I believe his Notre Dame address was his best ever - better and more meaningful and more moving than his inaugural address, by far.

To be sure, it was classy of the president to go to Notre Dame when the easy way out of the uncomfortable controversy surrounding his invitation would have been to bow out. Moreover, his remarks were not the "call to open-mindedness" that so many simplistic headlines summarized - incorrectly, to my way of thinking.

Rather, he shared a world view that people of all strongly held beliefs must consider: While we will never agree on certain matters of principle, we should still find ways to lift up mankind through cooperation and service and love.

The reason it may surprise some that I liked the president's Notre Dame speech is that I'm an ardent pro-lifer and practicing Catholic. I was among the 350,000-plus signers of the petition to persuade Notre Dame to rescind its invitation, believing the university issued its request to the president out of a desire for prestige, when it should have been fully committed instead to its Catholic identity.

Now, I'd like Mr. Obama to send a copy of that speech to Harry Knox, one of his appointees to the White House Council on Faith-based and Neighborhood Partnerships, for surely Mr. Knox should consider this important point contained in the address: "As citizens of a vibrant and varied democracy, how do we engage in vigorous debate? How does each of us remain firm in our principles, and fight for what we consider right, without demonizing those with just as strongly held convictions on the other side?"

If you haven't followed the controversy around Mr. Knox, he is the director of the religion and faith program for Human Rights Campaign, a group that identifies itself as the "largest national lesbian, gay, bisexual and transgender civil rights organization." As such, his mission is to fight what he thinks is bias and bigotry against the LGBT community within churches and religious organizations. Certainly, his principled belief in equality regardless of sexual orientation is his right.

But Mr. Knox must learn to respect the right of Catholics and of our church to hold principled beliefs of our own.

Unfortunately, Mr. Knox has a well-documented record of demonizing the Catholic Church and the Holy Father in particular. Only a few weeks before his appointment, he called the pope a "discredited leader" whose position on AIDS relief, which was widely misreported, was "morally reprehensible."

That's not the sort of talk that reflects Mr. Obama's stated mission of civility - restated eloquently Sunday at Notre Dame.

Catholic leaders, concerned about Mr. Knox's anti-Catholic bigotry, have called for the president to reconsider his appointment of Mr. Knox and remove him from the advisory council. That's a pretty strident request, but one that most certainly would affirm that this president will not suffer divisive political rhetoric.

I think the president means what he says, and after reading his entire speech - not just the misleading headlines meant to incite news consumers - I think he wants to be a moral leader.

But moral leadership takes courage, including the courage to admit that you chose the wrong person to help steer our diverse nation toward greater cooperation and service and love.