Marvin Olasky
|
Posted: May 14, 2020 12:01 AM
Share   Tweet
The opinions expressed by columnists are their own and do not necessarily represent the views of Townhall.com. 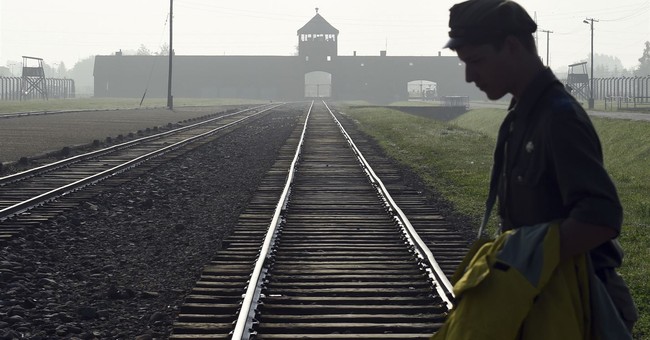 Amid stories of how the coronavirus focuses our attention, I recalled a Russian short story about an officer marching idealistic political prisoners on a muddy road to where a firing squad waits. He carefully avoids puddles, keeping his boots shiny. Watching these noncriminal criminals die sickens him. On the way back he does not avoid puddles: What does it matter if mud cakes his boots?

That’s in a way what happened to my father 75 years ago. He never said what he saw once the war in Europe ended on May 8, 1945, but I’ve learned from official records that his Army group transported liberated prisoners and displaced persons. My father’s knowledge of German made him a logical choice for assignment to concentration camp work.

There he probably saw survivors staggering among piles of dead bodies, mutilated and emaciated, that German guards didn’t have time to burn or bury. He probably saw the floors of huge cremation ovens piled high with bone ash. He probably saw the dead by the thousands stacked like logs by a fireplace, logs with skeletal faces, with limbs dangling from naked gray trunks.

Plus, Eli Olasky received news of what had happened in Olevsk, where his grandparents and other relatives had lived until 1941. That year, according to testimony by Tevel Trosman, Iakov Shklover, and Aleksei Makarchuk, local Ukrainians first made 300 Olevsk Jews tear out grass with their teeth. In November, German troops marched 500-900 Jewish men, women, and children to a ravine two miles away. The soldiers forced them to remove all their clothes and stand in front of pre-dug trenches. The Germans fired their guns and Jews kept dropping. Each group fell onto the bodies of previous victims.

In 2013 I retraced their steps over those two miles and saw the spot where two of my great-grandparents may have died. I also visited Korets, the small town nearby from which my father’s mother had come, and read an account from eyewitness Yitzhak Feiner: On May 21, 1942, Germans took “men and women, six at a time, and led them to a pit, after each had to undress and remain naked. In the pit they were made to lie face down and on the edge of the pit six Germans, ready with their revolvers, shot the six victims in the head.”

German soldiers before shooting did pull out of a pit Yakov Hirschenhorn, a doctor who had patched up some of them. They told him to go home: “He begged to let his wife go with him, but the murderers did not agree. He went back into the pit and was shot with the others.”

Feiner also described German soldiers seizing Jewish children and throwing them into “horse-driven wagons just like one would throw stones. The murderer would seize the child—by the little hand, by the leg, by the head or by the shirt—and throw it into the wagon. The wagons were loaded full with the children, one on top of the other, [who] were thrown, alive, straight from the wagon into a pit. After two wagons were unloaded this way, two grenades were thrown in, tearing the children apart.”

The murders in my great-grandparents’ towns were a small part of the total butchery. Karl Jäger, commander of Einsatzkommando 3, kept a daily running total showing the success of his killing unit: almost 140,000 executions in 71 locations. Other Einsatzkommando groups were also at work, and this was all before Nazi gas chambers accelerated the process.

All of this had an effect on those who lived. Before 1945, Eli Olasky was ambitious and determined to pursue a graduate school degree. I obtained his records and saw that on Jan. 22, 1946, a month after his return from Europe, a graduate adviser noted that my father “seemed to be vague and looked through the catalogue at random.” He had lost his faith in God and, like the officer in the short story, no longer marched carefully through life.