Marvin Olasky
|
Posted: May 19, 2019 12:01 AM
Share   Tweet
The opinions expressed by columnists are their own and do not necessarily represent the views of Townhall.com. 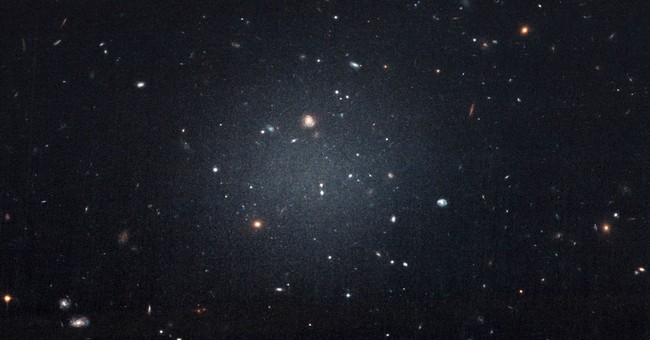 If you haven’t taken a science course since high school or college decades ago, here’s some news: We know a lot less now about the basic makeup of the universe than we thought we did then.

Several decades ago scientists knew the universe was expanding. They believed the expansion had to slow down. No astronomer had observed such slowing but it had to happen because the universe is full of matter, matter has gravity, and gravity pulls things together.

In 1998, though, the Hubble Space Telescope let us look at very distant stars. It became apparent that the universe was expanding faster and faster, not slower. Why? No one knew, but it seemed that something else we couldn’t see or measure had to be present. Theorists named the mystery stuff “dark matter,” possibly made up of some subatomic particles, and “dark energy,” maybe made up of something else for which we have no name.

To explain the behavior of what we perceive through telescopes and other instruments, scientists now guesstimate that “dark energy” makes up 68 percent of the universe and “dark matter” makes up 27 percent. That adds up to 95 percent, which means we can see or measure only 5 percent of reality, a humbling number indeed. Again, we know of the dark stuff only because of its effect on visible matter.

Let’s apply this to one of the hardest theological problems, theodicy, which literally means “justifying God.” Christian theodicy attempts to explain why an omniscient, omnipotent, and omnibenevolent God allows evil to exist and even -- as with Nazi and Communist butchers -- expand.

Theologians over the centuries have proposed many explanations. The most popular hinge on man’s free will: God could have made us like robots or Stepford wives, only able to obey orders -- but how then would we be in the image of God? He could have kept bad things from happening to us, but it’s often those things that make us realize how desperately we need His grace.

Many people understand that some suffering is educational, and tragedies affecting other families may warn us. I remember as a white-water rafter on the Nantahala River in North Carolina hearing that three people out of 14,000 going down the river had drowned, so if you fall out of your boat don’t try to walk and possibly get your foot snagged on a rock and fall facedown: Float downstream, feet first. A California newspaper editor ran a photo of a mourning family standing over the corpse of a child who entered a lake against parental instructions and drowned: Readers protested, but that alert may have saved other lives.

We might say what does not kill us makes us stronger, but what about all those who die suddenly without the opportunity to learn lessons? What about hurricanes, tsunamis, and earthquakes that kill both innocent and guilty? What about diseases that take the lives of children? What about the scale of disaster? Six million Jews gassed or shot in the Holocaust, along with 6 million others? Tens of millions in China, the Soviet Union, Cambodia, and elsewhere? Tens of thousands year after year in Syria, Yemen, and other venues of war. Why so many, Lord?

Dark energy and dark matter: Scientists can’t see or measure any of it, but they believe it exists because of its effect on what they can see and measure. The apocryphal Gospel of Nicodemus in the fourth century, Bernard of Clairvaux in the 12th century, and John Milton in the 17th century also had a name for what they could not see or measure, except by its effect on the visible: They wrote about princeps tenebrarum, the Prince of Darkness.

We don’t tend to talk about Satan these days, except in weak, semi-joking excuses (“the devil made me do it”) or Rolling Stones songs: “Please allow me to introduce myself / I’m a man of wealth and taste / I’ve been around for a long, long year / Stole many a man’s soul and faith / . When the blitzkrieg raged and the bodies stank.” Yet, as Jeffrey Burton Russell writes in Satan, “The depth and intensity [of evil] exceeds and transcends what could be expected in an individual human.  No theodicy that does not take the Devil fully into consideration is likely to be persuasive.” Dark matter. Dark energy. Dark supernatural power.