Connecting the Dots and Beating Depression

Marvin Olasky
|
Posted: Aug 03, 2017 12:00 AM
Share   Tweet
The opinions expressed by columnists are their own and do not necessarily represent the views of Townhall.com. 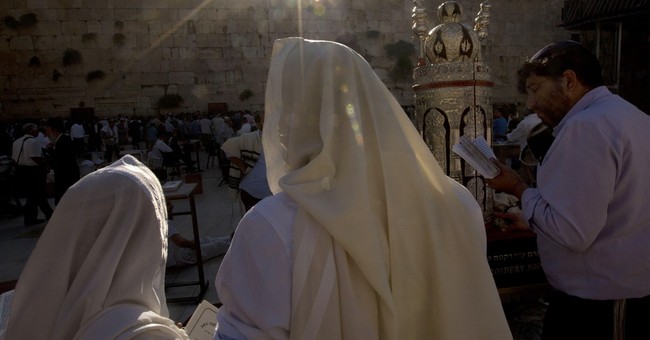 If you’re having a bitter day, this column is for you. Let’s start with a memory:

“Saturday in the park / I think it was the Fourth of July / People dancing, people laughing / A man selling ice cream … / And I’ve been waiting such a long time / For Saturday.”

The band Chicago released that song 45 years ago on July 10, 1972. It’s all-American joyful, like Beach Boys music of the previous decade. But coins have two sides.

Many Christians know of the Jewish New Year’s Day, Rosh Hashana, but few are aware of a day that resonates even more powerfully through Jewish history: Tisha b’Av, the ninth day of the month of Av, the day on which the Jerusalem temples were destroyed 2,603 and 1,947 years ago.

On that same sundown-to-sundown fast day (Av 9 on the Hebrew calendar is July 31/Aug. 1 this year) monarchs expelled Jews from England in 1290 and from Spain in 1492. If we start counting at Rosh Hashana, Av is the 11th month of the Jewish year, and some -- fancifully but poignantly -- connect 11/9 to Kristallnacht, when Nazis on Nov. 9, 1938, accelerated their attacks on Jews, and our own 9/11.

Here’s one more date: July 30, 1967 -- 50 years ago. That’s the day Joni Eareckson dove into Chesapeake Bay after making the innocent little mistake of misjudging the shallowness of the water. She suffered a fracture between the fourth and fifth cervical levels and became a quadriplegic, paralyzed from the shoulders down.

That little mistake has left her in a wheelchair for 50 years. It also changed her, she said in an interview we did almost five years ago, from a person who had “confused the abundant Christian life with the great American dream: I was a Christian and would ... marry a wonderful man who made $250,000 a year, and we’d have 2.5 children. It was me-focused: What can God do for me?”

I don’t have to recap before WORLD’s mostly Christian readership how the Joni and Friends ministry has helped millions of people. But I didn’t want the interview just to be warm and fuzzy, so I asked, after she mentioned her superficial but not evil 2.5/$250,000 aspirations, what she thought her life actually would have been like had she not broken her neck.

Joni replied, “I don’t say this in front of hardly any audience, but in front of this [Patrick Henry College] audience I will: I believe what happened to me was an example of Hebrews Chapter 12 discipline. I do. I’ve had Christians ask, ‘How can you say that of God? That’s awful for you to say He would discipline you by making you a quadriplegic.’ No, no, no. Read Hebrews Chapter 12: God disciplines those He loves. Had I not broken my neck I’d probably be on my second divorce, maxing out my husband’s credit cards, planning my next ski vacation. I wouldn’t be here extolling the glories of the gospel and the power of God to help a person smile, not in spite of the problems, but because of them.”

That’s important: She’s had a better life “not in spite of the problems, but because of them.” Whenever we think our lives have too much Tisha b’Av and not enough Fourth of July, we tend to blame God -- but who knows better than God how much adversity we need to build our character, glorify Him, and fit us for heaven?

And in less dramatic ways than Joni Eareckson Tada experienced, small Tisha b’Avs make for sweeter July Fourths. Four years ago an article, “Why no Calvinist should ever be a Cubs fan,” asked such fans, “Why would you put yourself through that torture? ... The Cubs are notoriously known for being cursed by God.” It went on in that vein, but I’m not citing the author because he has now deleted the website containing that article, perhaps after the dramatic Chicago win in the World Series last fall.

After all, Russians have a saying, “Two small hands at the breast, and the pangs of childbirth are forgotten.” And, when not just hardships but deaths leave us bitter, remember: We would have no Fourth of July celebrations but for those who died at Lexington, Concord, and Bunker Hill.

Wait...Those Are the Words the Waukesha Christmas Rampage Used to Describe the Coverage of His Crime
Townhall
'Ten thousand Pinocchios': Stacey Abrams tells Rachel Maddow she 'did not challenge the outcome of the election'
Twitchy
Jussie Smollett's Request for a Mistrial Will Have You Literally Laughing out Loud
Redstate
40 Years Ago, Monty Python Predicted (and Mocked) Wokeness
PJ Media