Marvin Olasky
|
Posted: Apr 25, 2017 12:01 AM
Share   Tweet
The opinions expressed by columnists are their own and do not necessarily represent the views of Townhall.com. 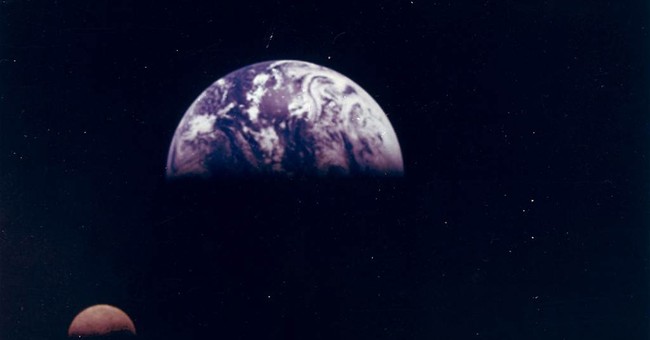 In “A Big Bang in a Little Room,” Zeeya Merali describes the consensus among science’s biggest brains: “The notion that a god made our universe is several rungs on the wackiness ladder above the idea that it was made by aliens.” Nevertheless, Merali describes herself as both a believer in God and the holder of an Ivy League Ph.D. in theoretical physics, so she asks a good question: If God desired to send us a message, how would He do it?

Thirty-two years ago Carl Sagan’s novel “Contact” included speculation about finding a code in the digits of pi, which starts out 3.14159 and keeps going forever -- but no one’s found it. Others said God might encode a message within the human genome -- but that would be useful only for creatures on this planet. Merali suggests a message embedded in background radiation, so any sufficiently advanced creatures anywhere in the universe could perceive it. (Astronomers learn about distant galaxies and galaxy clusters by mapping tiny radiation wrinkles.)

The time to engrave such a message in the sky would be at the moment of creation, Merali writes: “Think of it like drawing a smiley face in marker on a balloon straight out of the package. Blow up the balloon and the picture stretches with the rubber. In the same way, as the cosmos rapidly inflated, its creator’s message would shine out across the whole sky.” She says no one has found such a message thus far, thus disappointing those who believe in God.

No such message? With respect for Merali, who writes charmingly, I think she’s wrong, for three reasons.

First, we live on a Goldilocks “just right” planet within a Goldilocks universe. The “RTB Design Compendium” at reasons.org lists nearly 1,500 features of the universe and Earth that must fall within narrow ranges to allow for the possibility of life, and then advanced life. For example: We need a particular composition of the Earth’s core and atmosphere, a particular Earth axis tilt and rotation speed, particular capillary action and surface tension, and so on.

We exist because of things most of us know nothing about: cosmic ray protons, intergalactic hydrogen gas clouds, molecular hydrogen formed by supernova eruptions, etc. If one loose definition of miracle is “a highly improbable or extraordinary event,” look at the likelihood of simple bacteria being able to survive anywhere in the universe apart from divine action: 1 chance in 10 followed by 556 zeros. What about the likelihood of advanced life? One chance in 10 followed by 1,054 zeros.

In February’s Super Bowl the New England Patriots trailed by 25 points with 17 minutes and 7 seconds left in the game. They managed to tie the game and win it in overtime: Headlines proclaimed “a miracle comeback.” But what if the Patriots had trailed by 8,216 points and needed to score one touchdown (plus two extra points) in every one of those 1,027 seconds left in the game? That gives us a sense of the unlikeliness of our existence purely through material causes -- and we’d have to multiply that physical improbability/impossibility by about a trillion. (That’s why some atheistic scientists grab on to the wacky multiverse theory.)

The second proof of God’s existence: 20th-century theodicy. Decisions by three atheists -- Mao, Stalin, and Hitler -- led to 100 million deaths. Some people say that shows a merciful God does not exist, but we should flip the surmise: Atheism kills, and we’ve seen since the 1930s what happens when we worship human gods. (Yes, some “Christians” have also murdered, in smaller quantities, but they also claimed godlike status.) God warns us throughout the Bible that sin has consequences: Should we consider Him a liar because He tells the truth?

Why don’t we wake up every morning and realize our existence is miraculous? Maybe because so much noise surrounds us. But here’s a third reason to believe in God: I’ve met some men in their 20s whose thinking as teens was so destructive that it looked as if they would soon be dead, imprisoned, or traitorous. I was one of them. But “the steadfast love of the Lord never ceases; his mercies never come to an end” -- and the Bible tells me so.

God has sent a message, not in background radiation but in our existence, our history, and in what should be our daily reading.