Marvin Olasky
|
Posted: Mar 14, 2017 12:01 AM
Share   Tweet
The opinions expressed by columnists are their own and do not necessarily represent the views of Townhall.com. 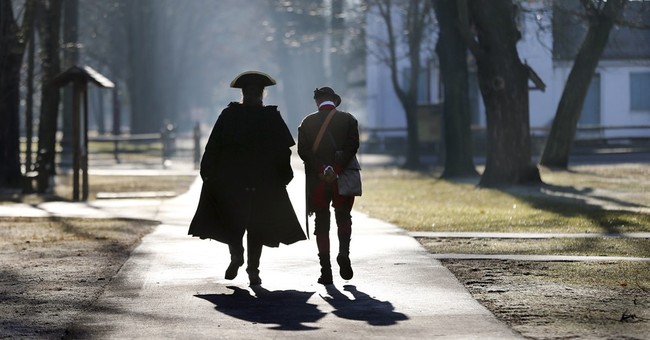 Valentine’s Day and Presidents Day were only eight days apart this year, but widely separated in how we perceive them: V-Day brings cards, chocolates, and roses, but P-Day brings to mind portraits of an old, unsmiling George Washington suitable for framing in schoolrooms and government buildings.

Washington in real life, though, went through a series of romances beginning when he was 16. That’s when he sent a sonnet to one young lady, Frances Alexander, with lines that could go on a valentine: “Why should my poor restless heart / Stand to oppose thy might and power / At last surrender to Cupid’s feathered dart.”

Legends to the contrary, few of the teenaged Washington’s neighbors saw him as a candidate for storybook sainthood. Friends called him the “stallion of the Potomac” and expected wild behavior. Lord Fairfax, his mentor, warned the young ladies of Virginia, “George Washington is beginning to feel the sap rising, being in the spring of life, and is getting ready to be the prey of your sex, wherefore may the Lord help him.”

It appears that Washington received the Lord’s help. The sap rose, but when Frances Alexander said no, Washington was able to remember that true love waits. The pattern repeated itself. In 1752, at age 20, Washington proposed marriage to a Virginia beauty, Betsy Fauntleroy. She said no. Later he courted Mary Eliza Philipse, whom he called “deep-bosomed.” She turned him down also.

Washington’s only recorded act of ungentlemanly behavior came when he was 25 and returning from heroic fighting in the French and Indian War. Perhaps full of himself, he wrote to a married neighbor, Sally Fairfax, and stated that she had drawn him, “or rather I have drawn myself, into an honest confession of a single fact,” that she was “the object of my Love.”

If Washington’s story were fiction, some 19th century British novelist would have had Mr. Fairfax die in a shipwreck at this point. But in reality he lived on, and Washington quickly stopped his errant courtship by marrying the recently widowed Martha Custis.

Martha Custis (5 feet tall and plump) may have met George Washington (6-foot-2 and muscular, with size 13 shoes) at a dance or party during the eight years she was married to Daniel Parke Custis. She and George Washington had heard of each other for years, but their first substantial meeting occurred on March 16, 1758, when she was eight months a widow and he was worried about going too far with Sally Fairfax.

Washington proposed to her nine days later. They married 10 months after that and stayed married for 41 years until death did them part. Martha had a 4-year-old son and a 2-year-old daughter from her previous marriage, and soon Washington’s orders for goods from London included items such as “six little books for children beginning to read” and “one fashionably dressed baby [doll].”

The wealthy widow carried with her 6,000 acres and 100 slaves, but Martha also brought a warm femininity that complemented well Washington’s rough spots. Her ability to make guests feel welcome was important to Washington, who liked to be hospitable but was not particularly convivial. Between 1768 and 1775 the Washingtons at Mount Vernon entertained about 2,000 guests.

During the Revolutionary War, Martha frequently joined her husband and became not only a hostess for officers but also a mother to lonely soldiers. When she was not around, young women were readily available to a commanding officer, and British generals regularly took mistresses. Washington, though, wore around his neck a miniature portrait of Martha. “I retain an unalterable affection for you,” he wrote to her, “which neither time nor distance can change.”

Their one sadness: They had no children together, only dogs with names like Drunkard, Sweetlips, and Truelove. Other men who did not have offspring traded in wives for those that might be fecund. Washington did not. His probable sterility made him the perfect father to a republic rather than a monarchy—and he remained faithful to Martha and to his country.