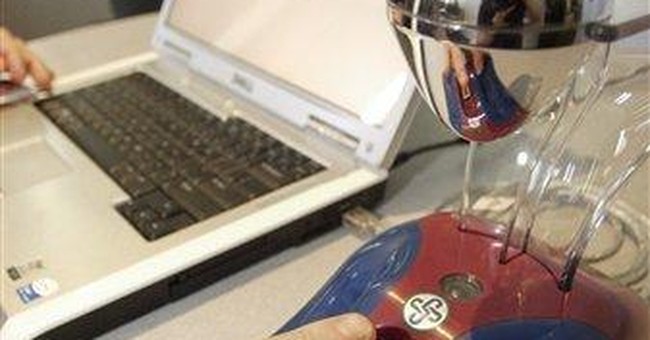 Some trends are so evident that even I can't miss them. Chapter 9 of a book I wrote in the 1980s, Prodigal Press, has the title, "Network News and Local Newspapers: The Coming Economic Judgment." It was easy to forecast that "use of personal computers in homes will lead to a more efficient delivery system" for the news, and that in the process liberal behemoths would stagger and fall.

Should Christians be upset that some major city news­papers have gone out of business, and that even the mighty New York Times has mortgaged its headquarters? No: We should work on filling the gaps. In that vein, another opportunity is coming: The small shock of falling endowments at many universities will soon be followed by a larger shock of falling enrollments, as online education leads to a more efficient delivery system for education.

The media/education analogy starts with the way cost of entry has gone way down in both realms. It used to take tens of millions of dollars to buy printing presses and distribute their products, or to build classroom buildings, dormitories, and performing arts centers. Now, with online news and online education, anyone can get in the game.

But in other ways the academic game is unlike the media game. Online media can bring words and photos equivalent to those of a newspaper, but can online education match the classroom experience? And, since college tuition buys not only education (sometimes) but higher status and improved future earnings, will online diplomas be satisfactory union cards?

Some new evidence suggests that the answer to both questions will soon be yes. More than 1,000 studies of online learning have been published during the past 13 years. A U.S. Department of Education analysis of them concluded that, on average, "students in online learning conditions performed better than those receiving face-to-face instruction" in the same courses. One reason is that face-to-face is often not face-to-face: Many college students snooze in big lecture halls. In good online courses, though, instructors require every student to answer questions and stay involved.

I've spent three decades in college classrooms and have been to only five operas, all in New York, but here's a tentative analogy: Opera in person is great if you're up close and can both hear the music and watch the expressions on the singers' faces. It's not so great if you're in the balcony. I enjoyed last month sitting with my wife, Susan, in the Lincoln Center plaza and watching Metropolitan Opera HD films, especially since the price was right (free). That's far better than paying $160 just to hug the back wall of the hall.

Similarly, it's great for students to sit in a small seminar with a wise, passionate Christian professor pushing students to think. It's a waste of time and money for students to sit at the back of a big lecture hall as a time-serving tenured mediocrity drones on. The Washington Monthly last month ran an article, "College for $99 a Month." Author Kevin Carey wrote, "The day is coming—sooner than many people think—when a great deal of money is going to abruptly melt out of the higher education system, just as it has in scores of other industries that traffic in information that is now far cheaper and more easily accessible than it has ever been before."

Such articles along with the Department of Education study show that online education has moved from the margins to the center, and that online degrees will soon be thoroughly respectable. The best Christian colleges, the highest-prestige private ones, and the best-funded state universities with good football teams will survive in a bricks-and-mortar way, but online schools will take the place of many mediocre ones.

My Sept. 12 WORLD article about the purge of a hard-working Christian at a state university began and ended with the famous country music line, "Work your fingers to the bone, what do you get? Boney fingers." One reader responded that the ending was depressing—so let me clarify. Mene mene tekel upharsin: Leftist professors who feel entitled to parade their views and purge their opponents will lose their captive audience. That's good news for parents and students. That's opportunity for Christians who teach true ideas and learn to compete boldly in this emerging marketplace.