Brady's Latest Effort Is Not About the Troops, It's About Control

Mark Oliva
|
Posted: Jul 27, 2020 9:39 AM
Share   Tweet
The opinions expressed by columnists are their own and do not necessarily represent the views of Townhall.com. 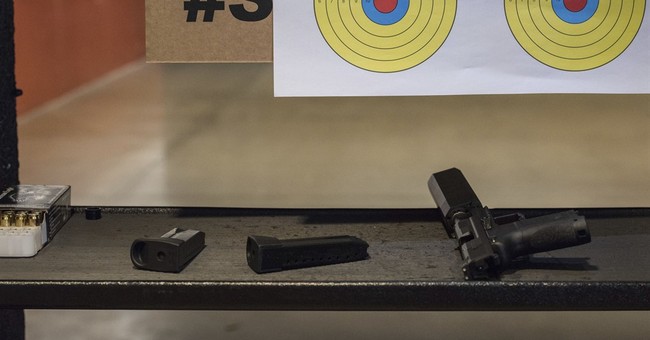 Gun control has a problem with the truth. They can’t shoot straight.

Brady: United Against Gun Violence is the latest example of just making it up as they go and thinking no one will notice. Officials there sent out a plea for money claiming the Trump administration’s rollback of a 2002 State Department ban on suppressor exports is putting U.S. service members’ lives at risk. The fundraiser email read as follows:

"The harm is clear: This repeal will increase the risk that U.S. service members will be shot or killed with American-made guns and accessories.

Suppressors are just a muffler for a gun. They’re not the Hollywood depiction of the “pffft” puff sound glamorized by the silver screen. Suppressors reduce the noise of gunfire to around 140 decibels, the threshold where instant and permanent hearing loss occurs. It’s still about as loud as a jackhammer.

Suppressor exports are still going to be highly regulated. The State Department’s Directorate of Defense Trade Controls (DDTC) will maintain strict oversight of suppressor exports. The DDTC noted it will handle suppressor exports in a manner consistent with other U.S. Munitions List (USML)-controlled technologies. That means suppressors are going to be licensed and regulated for export in the same manner as jet fighters, tanks, rockets and machine guns.

Consistent with current licensing practices, all licenses will be reviewed and adjudicated on a case-by-case basis, and any pre-license checks or post shipment verifications will be conducted as deemed necessary and appropriate based on the totality of the circumstances of the transaction. Standard staffing protocols within the Department and interagency will be applied as required.

Earlier this year, the Trump administration completed the USML-to-Commerce Control List transition, which moved USML Categories I-III, which include sporting arms and ammunition. Previously, these items were treated just like tanks and rocket launchers, and it created an uneven marketplace. Those reforms were started under the Obama administration and were left undone for political reasons. Now, sporting arms and ammunition are licensed by Commerce under the Commerce Control List. This move, however, still maintains suppressors under DDTC oversight and regulation.

A quick internet search could easily reveal that suppressors are not just legal for use in foreign countries, some actually require their use. In Finland and France, suppressors are available over the counter. The notion that the rest of the world is devoid of suppressors because U.S. companies could not export them is preposterous.  Given that sound suppressors are widely available at retail in other parts of the world, one would expect Brady to offer some factual support for their claim that our troops will be at risk from allowing U.S. companies to compete against foreign manufacturers. And they do not explain how continuing to ban the licensed and controlled export diminishes the risk they claim.

Brady’s “do it for the troops” assertion would be laughable if they weren’t so serious in their outright dishonesty. Brady isn’t doing anything about illicit international arms trade. They’re only out to deny law-abiding Americans their God-given rights. They don’t care how unscrupulous they are in that goal.

Take, for example, the recent discovery that two gun control groups, including Brady, were found to be taking taxpayer-coronavirus Paycheck Protection Program loans under the recently-passed CARES Act. Brady snapped up between $350,000 and $1 million, ostensibly to keep their doors open because coronavirus had a detrimental impact on their operations. They took the money and ran, though, while also pledging $4 million to sway 2020 elections for gun control. They weren’t the only ones. Giffords: Courage to Fight Gun Violence did the same thing, grabbing $150,000-$350,000 at the same time they pledged $1.25 million for Democratic former Gov. John Hickenlooper in his U.S. Senate race against Sen. Cory Gardner (R-Colo.).  That’s on top of the millions Giffords has invested in other races, including co-founder Mark Kelly’s U.S. Senate bid in Arizona, where the group is spending $5 million to take the seat from U.S. Sen. Martha McSally (R-Ariz.).  And, Mark Kelly is using the Giffords’ mailing list to raise money for his campaign.

Here’s what’s morally reprehensible. Brady’s blatant dishonesty that’s wrapped in a thin vapor of false patriotic duty to deny God-given rights of U.S. citizens for their own political gain is stomach-churning. This appeal for donations based on a shaky foundation of lies is telling of their desperation. They know that in three months, between March and May, more than 2.5 million Americans jumped off the gun ownership fence and planted their feet firmly in the gun-owning community. They are from all walks of life. Conservative, liberal, African-American, Caucasian, Asian, Latino, gay, straight, Democrat and Republican. Some even marched for gun control before.

For Brady, it’s not about the troops. It’s about control. Time for them to execute an about face and march away.

Mark Oliva is director of public affairs for the National Shooting Sports Foundation, the trade association for the firearms and ammunition industries. He is a retired Marine Master Gunnery Sergeant with 25 years of service, including tours in Iraq, Afghanistan, Haiti, Albania, and Zaire.