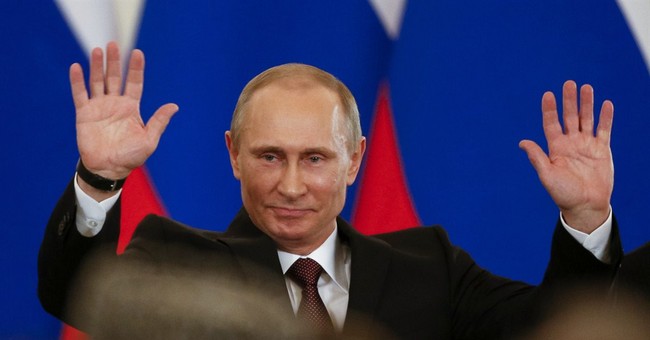 Russia's imposition this week of its own "sanctions" against nine U.S. Senators and administration figures reveals its true weakness. Of course, being banned from visiting Russia is hardly a hardship at all, most people would not willingly want to visit that dreary country anyway. And Russia didn't even bother with "asset freezes," as no sane person would willingly risk their savings in any of Russia's financially struggling banks.

But the Kremlin's laughable attempt to react to the limited sanctions Obama has imposed so far reveal both the depth of Moscow's fear and vulnerability. Russia's feeble economy is already facing severe strains, and real sanctions with bite could push it over a cliff.

Russia enjoyed eight years of solid economic growth before the global financial crisis. But it was almost all based on rising energy prices, as Russia’s economy is woefully dependent on oil and gas exports. Otherwise, Russia produces little that it can export for cash.

Since the 2008 crisis, economic growth has been notably anemic – 1.3% for 2013, and analysts at VTB Bank are forecasting zero growth for 2014 and recession later in the year. And the Finance Ministry has calculated that Russia needs the oil price to remain above $100 in order to balance the budget.

Russia’s structurally feeble economy is further weakened by corruption, wasteful spending, and capital flight. And as oil futures prices indicate, the market is expecting lower prices going forward. And they could decline even more as new extraction technologies bring more oil and gas to market.

Against this backdrop, the future already looked grim for Russia. Corruption and waste are heavy burdens on the state budget. And the Kremlin needs to indulge in increased social spending to maintain the loyalty of key constituencies, including government employees and pensioners.

Russia does have substantial reserves it put away when oil prices were higher. But much of that money has already been squandered on large scale “prestige” projects. For example, Putin allocated over $50 billion to stage the Sochi Olympics. But now that the mascots have been put away, Sochi is a white elephant which will never recover any of the massive funds invested in Putin’s games.

And Crimea is going to put heavy new burdens on Russia’s stretched finances. Russia is in a very precarious position, and despite the Kremlin’s bravado, it is extremely vulnerable to the right sanctions. Putin’s cronies may bravely mock the visa restrictions and asset freezes Obama has imposed to date – they don’t have U.S. bank accounts and probably can live without visiting Disney World for the foreseeable future.

But Obama has potentially powerful weapons in his sanctions arsenal. Iran is a case in point. Cutting off access to the world financial system has brought even the toughest mullahs to the negotiating table. And sanctions on Russia’s energy exports could literally “make the economy scream.”

The ruble is already down almost 20% since last fall, and Russia’s equity markets are in a freefall, even as global indices are reaching record highs.

Putin’s social compact has always been this – a plentiful trough for the bureaucrats to feed from, and rising incomes for the general population. This economic machine is already stalling, and well placed sanctions could deliver it a fatal blow. Russia’s middle class may love Putin’s apparent projection of strength, but his weakness is that they are not ready to endure economic hardship for his foreign adventures.

Putin may have expected his “conquest” of Crimea to permanently cement his power, but his miscalculation may in fact lead to “Maidan” in Moscow if either the oligarchs or the populace turn on his system. The open question right now is whether President Obama will use sanctions with real bite merely to deter Putin from further intrusions on Ukrainian soil, or as a means to pry Crimea back out of Putin's paws.