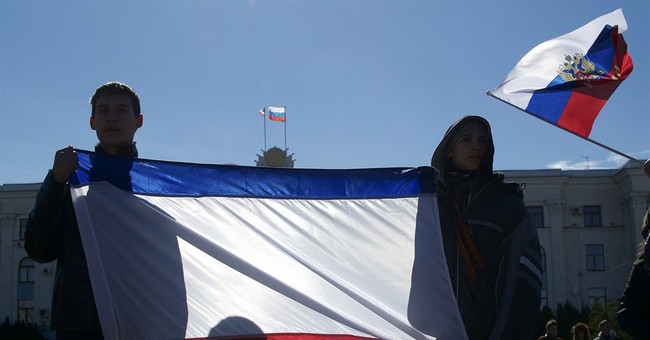 The Kremlin is showing its true colors. If there were any doubts, they should have been removed by one starkly threatening pronouncement on Russia state television. On prime time TV, Dmitry Kiselyov menacingly stated to his audience that “Russia is the only country in the world capable of turning the United States to radioactive ash.” Kiselov styles himself as a journalist, but in fact he is a Kremlin appointed mouthpiece, and such a provocative statement could only be made with prior Kremlin approval.

Before the present Ukrainian crisis Kiselyov had distinguished himself for proclaiming that gay people should not be allowed to be organ donors, and if they die in a car crash, their hearts should be burned and buried rather than donated to patients needing transplants. This is part and parcel of Kremlin strategy, whipping up popular sentiment against perceived internal and external enemies of Russia. Russian state media also demonizes so-called “fifth columnists,” anyone opposed to either the Kremlin’s domestic repressions or foreign military adventures.

Last month Russia invaded a neighboring country, Ukraine, and aims to annex a sizable portion of its territory. In 2008, Russia attacked another neighbor, Georgia, and de facto annexed sizable portions of its territory. In both cases, Russia claimed that it was acting to protect civilian lives of Russians or holders of Russian passports. Russia pursues the exceptional policy of issuing its passports to citizens of other countries, which then supplies a pretext to invade to protect “its” citizens. It is no idle exaggeration to compare this to Hitler’s claims to protect ethnic Germans by annexing the Sudetenland in 1938.

During the invasion of Georgia, state media broadcast non-stop hysterical accusations of genocide against the population of South Ossetia, one of the provinces Russia ultimately annexed. In fact, approximately 120 people were killed as a result of Russian-Georgian combat, but none were shown to be victims of deliberate killings.

Likewise, in Ukraine, Russia falsely claims to be acting to “protect” Ukrainian citizens against their own government. In the 22 years Ukraine has been independent, there is no record of domestic repression against citizens in Crimea or eastern Ukraine, contrary to the wild claims Kremlin propaganda. According the Kremlin, Russia invaded Crimea to protect residents against the violent designs of “neo-Nazi and fascist hooligans.”

Another element of the Kremlin plan is to characterize neighboring governments as fascistic U.S. stooges. According to its logic, any regime not subordinated to Kremlin control must be an illegitimate regime installed by the U.S. and bent on far right wing domestic agendas. Under Mikhail Saakashvili, Georgia dramatically reduced corruption, a disease endemic to the post-Soviet region. Georgia also attracted massive foreign direct investment and liberalized its over regulated economy. And the country began to chart an independent foreign policy, applying for both EU and NATO membership.

The same playbook is action today. State run media portray the people’s revolution in Ukraine as an illegal putsch led by anti-Semitic, anti-Russian ultra-nationalists and neo-Nazis, financed and installed in power by the dark machinations of U.S. puppet masters. There are far right fringe elements in Ukrainian politics, just as there are in Russia, and even in Europe. But the revolt against Viktor Yanukovych, the Kremlin puppet ex-president of Ukraine, was driven almost entirely by the aspirations of Ukrainians driven to despair by Ukraine’s poverty and outrage at his kleptomaniac and authoritarian rule. And while the U.S. has supported this new popular government, its ascent to power was entirely the result of genuine support from the populace.

Three other ex-Russian satellites in the Baltics – Lithuania, Latvia and Estonia – made the transition to democracies with modern market economies, firmly anchored in the EU and NATO as well. The Kremlin’s fear is that other ex-Soviet satellites will make the same transition. Hence continuing campaigns to destabilize Georgia, Ukraine, and Moldova.

If Ukraine succeeds in conducting new elections under its new government, and dismantling the corruption and inefficient legal and regulatory system it inherited from the Soviet era, this will constitute an existential threat to Vladimir Putin’s system of governance. His real concern isn’t some imagined repression of Crimea’s citizens, his true fear is the liberation of Ukraine’s citizenry from dysfunctional post-Soviet government.

The more countries formerly in Russia’s orbit adopt Western democracy and economic reforms, the greater the chances that someday Russia’s own citizens will look to their neighbors for examples of a better style of governance. This will be especially true if energy prices decline, as the twin props of Putin’s regime are internal repression and oil money to distribute to regime loyalists. When the latter is gone, the former will be insufficient to guarantee Putin’s continuance as Russia’s supremo, especially if his subjects see the results of better government in Russia’s “near abroad.” This is what Putin and his cabal are truly afraid of. America should stand up to his outrageous lies and cheap threats.

Why a Former Obama Economist Just Offered the Biden 2020 Campaign a Very Stark Warning
Matt Vespa
Northam Mandates Virginians Must Now Wear Masks, After He Forgets His at the Beach
Cortney O'Brien