What Would Obama Fight For? 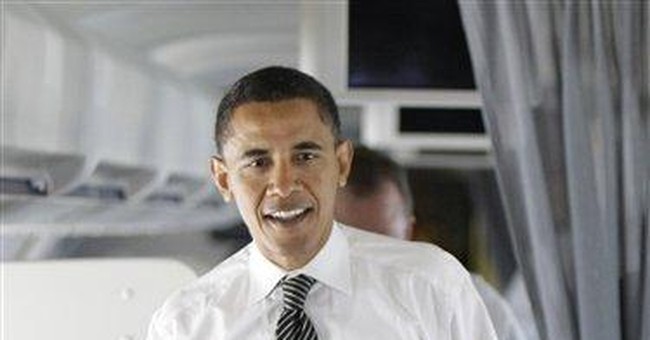 Unless you've been imbibing 100-proof hope-and-change, you could hardly listen to President — er, make that, Candidate — Obama's Berlin speech without questioning whether there is anything that he is truly willing to fight for. Not merely fighting metaphorically or deploying persuasive prose, but actually committing American lives to defend a principle that must not be compromised.

When Obama's campaign appropriated Brandenburg Gate as the backdrop for his "citizen of the world" speech, his handlers certainly expected the venue to frame him in a distinctly presidential stature.

Instead, the staging created an unmistakable contrast between courageous presidents who faced down genuine threats from dangerous enemies and the empty, self-aggrandizing platitudes of Obama, who seems to take for granted his election and now awaits transfiguration.

Obama talked about the 1948 Soviet blockade intended to enslave Berliners under communist domination, but he then suggested that "the people of the world" rose up to save Berlin.

The Allies' initial plan for post-war reconstruction of Germany faltered. (No, George W. Bush isn't the first president to have trouble transitioning from war against a uniformed enemy to uniting a conquered people and rebuilding their country.)

The Soviet communists, with a numerically superior military, saw the chance to seize control of an isolated people, but President Truman guided America, aided by Great Britain, to sustain a herculean airlift — more than 278,000 flights — that provided food and coal for isolated Berliners for nearly 11 months.

Obama recalled how the mayor of Berlin exhorted his people and "the people of the world" to "stand together united until this battle is one."

But Obama's record toward the people of Iraq is just the opposite. Had his view prevailed, the world would have turned its back on the Iraqis, allowing Saddam Hussein to continue his reign of terror, torture, murder and rape. Rather than help Iraqis secure their freedom, Obama's policy of retreat in the face of adversity would have told the people of Baghdad, "We're outta here; fend for yourselves."

So far, nothing about Obama indicates that he places a higher value on courage than on protecting his popularity.

President Kennedy's 1961 visit demonstrated solidarity with citizens of West Berlin when the Soviets divided the city by constructing the Berlin Wall. Kennedy's declaration, "ich bin ein Berliner," was considered too provocative by his own national security advisors.

When President Reagan called upon Soviet leader Mikhail Gorbachev to "tear down this wall," he was discouraged by his advisors and ridiculed in Europe as a "warmonger." Whereas Obama's superfluous speech attracted 200,000, Reagan's now-historic speech was witnessed by just 20,000 Germans — in contrast to 25,000 who protested against him.

Seventeen months later, Reagan was vindicated when the wall did come down. What could possibly be significant about Obama's speech 17 months from now?

When Obama claims "a wall came down, a continent came together, and history proved that there is no challenge too great for a world that stands as one," he proves that just because a speaker is captivating, he doesn't necessarily know what he's talking about.

The world certainly did not stand "as one" against Soviet communism. Much of the world either was controlled by, supportive of or unwilling to confront the USSR.

Like Obama, Reagan's predecessor, Jimmy Carter, thought negotiation and accommodation could accomplish more than confrontation. Six months into his first term, Carter criticized our "inordinate fear of communism." He signed treaties that trusted the Soviets, without verification, to limit their nuclear arsenal. By the end of his term, the Soviets had invaded Afghanistan and Iranian revolutionaries seized the U.S. embassy in Tehran.

Truman, Kennedy and Reagan earned their places in history because they believed that freedom — even for people in a foreign land — was worth fighting for. Freedom's enemies were moved not by words but by the conviction that our presidents would back their words with action.

Obama's talk tickles the ears of his audiences, but so far nothing indicates that he is prepared, in the manner of Teddy Roosevelt, to "speak softly and carry a big stick."