With Bernie's Exit, It Is Now Biden Versus Trump...Or Is It?

Mark Davis
|
Posted: Apr 09, 2020 12:01 AM
Share   Tweet
The opinions expressed by columnists are their own and do not necessarily represent the views of Townhall.com. 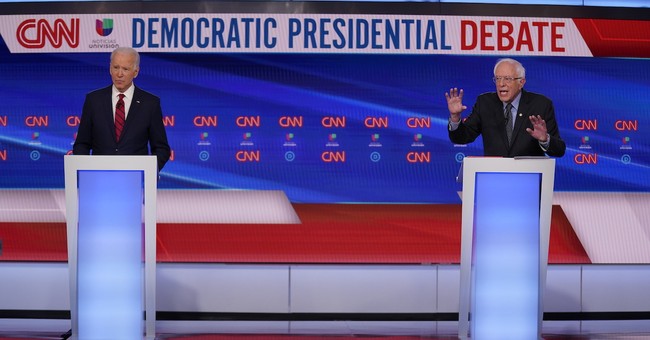 Before we explore the plot twists that lie ahead on the path to the November election, let’s settle one thing:  Bernie Sanders had zero chance of securing the nomination.

Voters were not going to loft him to some amazing comeback in the remaining primaries.  That left only the prospect of the Democrat party power structure somehow rigging the process in his favor.  That too carried zero plausibility, because say what you will about the DNC hierarchy, they had the clarity to know Donald Trump would have beaten Sanders in a landslide.

As Sanders exits, the instant glib hot take is that Trump will enjoy a similarly breezy election night against the last candidate standing, Joe Biden.  That is premature for two reasons: first, because it is eternally unwise to draw conclusions about an election seven months away.  And second, don’t bet the house that Joe Biden will be the nominee.

His nomination is of course the greatest likelihood by far.  He has won his delegate lead fair and square, as real voters have found his competition sufficiently lacking to award him the air of near-inevitability.  But his game-changing primary sweep last month seems like a year ago now, as the all-consuming coronavirus story puts Trump even more firmly in the daily headlines and Biden’s campaign indefinitely on the sidelines.

Any Democrat hopeful would be sucker-punched by these developments, but they are particularly damaging to Biden, whose sparse TV and online appearances in recent weeks seem weary and unfocused.

One wonders if the ivory towers of Democrat leadership, which once favored Biden over a flawed field, now shiver at the possibility of a Trump re-election, as previously ambivalent voters reward him, presuming our path out of the virus wilderness seems well-managed.

The COVID-19 atom bomb which obliterated the Sanders campaign and now hobbles the Biden campaign is the very thing that has given birth to speculation about a Governor who brings a tantalizing mixture of partisan energy and managerial competence as the weeks of virus coverage mount:  New York’s Andrew Cuomo.

There is no evidence whatsoever of a specific plot to sabotage Biden to allow for a Cuomo convention surprise.  No one even knows how that might happen.  Shoot, no one knows if there will even be a convention where this drama might unfold on a floor full of delegates.

But the process will inevitably continue in some form.  Biden is likely to rack up additional delegates in primaries to come, so the suspense will involve the level of obligation those delegates will display when the official nominating tally occurs, no earlier than mid-August.

That seems a distant horizon today.  Trump’s fortunes seem unlikely to sink, especially if the coming weeks feature additional glimmers of hope.  And as Biden faces more weeks with no opportunity to gain traction, Cuomo’s press updates will be seen almost as widely viewed as Trump’s.

One reason Biden outlasted younger, fresher candidates is the wide belief among Democrat voters that he was stronger than those rivals in a general election. That belief was probably sound.  But so is the belief that Cuomo might bring an injection of excitement Democrat voters will need to have any chance of ending the Trump presidency.

The basis for that potential excitement is the Cuomo capacity for working with Trump to help his state while maintaining a skill set to come after him aggressively when all of this is in the rear-view mirror and the season for debates and campaign ads blossoms in the fall.  That could be a powerful mix.  Cuomo will pull no punches in taking on the Trump agenda, but his appeal will run deeper than contrarian fire.  He will be able to recount examples of collaboration across party lines in a time of crisis.

There’s no way to know how much dump-Biden mischief is rattling around in the Democrat brain trust.  But Sanders did not include a Biden endorsement in his exit remarks, and some Democrat reaction involved assertions of “supporting the nominee” rather than an instant pivot to the former Vice President.

There will be no major news in the Democrat race while the virus has us by the throat.  Cuomo will not wrap up a daily briefing in Albany with an announcement that he is jumping into the race.  A tectonic shake-up of this order could only happen once the nation has the luxury of returning to the usual rhythm of an election year.  Who knows when that will be?

The risk for the DNC is whether an obstruction of Biden compounds the perception of having tilted the field against Sanders in two elections.  One tonic cures all of that: a broad conclusion that the party is not engaged in playing shallow favorites, as in its boosting of Hillary Clinton in 2016, but instead reaching to any length necessary to offer up a nominee that won’t get clobbered.

As with so many other chapters in political life, it is wise to know what we don’t know.  We don’t know whether Trump will emerge from the coronavirus fog as an inspiring, successful leader.  If he ushers us back to a participatory economy only to see COVID-19 return with a vengeance, he could be gravely damaged.

As for Biden, we don’t know whether the long pause will give him an energy boost for the home stretch. After long months of campaigning, he did not embarrass himself on crowded Democrat debate stages, and a singular focus on Trump will give him a chance to hone a simpler message, with the presumed help of a Democrat messaging machine that will be ready to mobilize every voter seeking to make Trump a one-term president, and that’s not a small number.

But the number of voters willing to re-elect Trump may be swelled by the upbeat mood of the virus recovery.  A nation enthused about returning to work, returning to church, returning to normalcy and returning to a vibrant economy could well turn to the candidate who has emphasized those themes for years.

Faced with that challenge, Democrats could surely be tempted to throw out the rule book in a year where the norms have been dashed against the rocks already-- primaries delayed, a convention that may or may not happen, a party roiled by turmoil before anyone had ever heard of the coronavirus.

The path to the final determination of who takes on Trump will grow clearer as time passes.  But even time itself is bent by the suffocating oddity of virus shutdowns.  Odds are we are looking at Trump vs. Biden by Labor Day.  But if recent history carries any recurring lesson, it is this:  you never know what might happen.