Mark Davis
|
Posted: Feb 21, 2017 12:01 AM
Share   Tweet
The opinions expressed by columnists are their own and do not necessarily represent the views of Townhall.com. 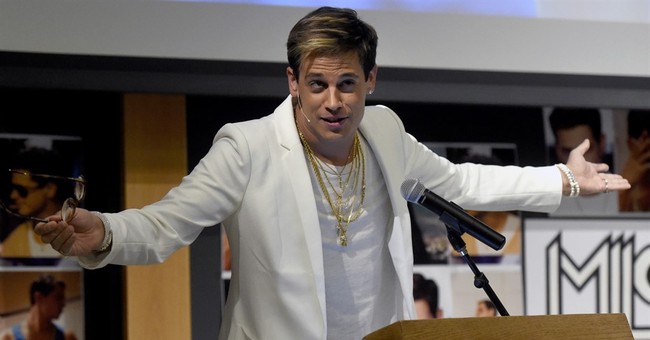 It was quite the weekend for Milo Yiannopoulos. After Friday night’s typically compelling sit-down with Bill Maher on HBO’s “Real Time,” the Saturday web buzz crackled with the news that the 32-year-old British provocateur had been named keynote speaker in the usually comfortable mainstream environment of CPAC.

This came as a surprise to many, including some on the American Conservative Union board that oversees the event. A debate ensued over whether a speaker sure to energize some and repel others was the smartest keynote choice.

Then Monday, the questions ran deeper, including but not limited to: Would Milo’s publisher cancel his book, due out in June? (Yes.) And would he be fired from the very job that lofted him to high visibility, writing and editing at Breitbart?

The bomb that exploded in his path is a video clip in which he explores with unfortunate imprecision the occasional gay teen who winds up in a relationship with an older (sometimes much older) adult man. This sparked instant cries that he was advocating pedophilia, which he denied in lengthy detail in a Sunday Facebook post, announcing to all: “I am completely disgusted by the abuse of children.”

He rightly asserts that an adult eyebrow raised in the direction of today’s rapidly developing older minors is not the same as a sexual taste for pre-pubescent children. But at this point, those layers of nuance became sufficiently uncomfortable that from the brain trust of CPAC to the offices of Simon & Schuster, conclusions were reached that it was time to distance.

So are these decisions justifiable, or has Milo been done wrong by people who should have stuck up for him?

Any perusal of Milo’s writings (and even more so his speaking) reveals that he makes life hard for defenders, and that seems to be the point. A tireless advocate for freedom of expression, he is a useful example of the old adage that innocuous speech requires no protection; it is the edgy firebrands who will draw negative attention requiring the armor of the Bill of Rights.

But I hope even Milo understands that this moment’s predicament has nothing to do with free speech. Unlike campus fascists who have sought to disrupt his invited appearances, a convention and a publisher have the right to associate with whomever they please. This includes the right to disassociate for whatever reasons they may cite.

We, in turn, are free to understand or lament these abandonments of Milo. So let’s move to whether he deserves such banishment.

Maybe it’s the months of explaining Donald Trump to people who cannot grasp his appeal, but I can understand the points Milo makes in the video without subscribing to any of them. While he may wistfully appreciate an older gay man offering comfort to an empathy-starved 17-year-old, my preference would be for young men to introspectively explore whether they might find and cling to the slightest thread of heterosexuality.

But that’s not the point. The issue surrounds whether Milo has crossed a line into ambivalence (if not approval) of even younger teens coming under the wing of gay mentors decades older.

Discussion groups are free to dive into the tricky layers of where those lines are drawn. A worthy distinction can be drawn between sexual attention toward pre-pubescent children and blossoming post-adolescents. But this is a roundtable millions of Americans have no interest in, and the very sound of these ruminations is apparently mortifying in a number of locations that mere days ago were pleased to do business with Milo.

His book deal, his CPAC speaking gig and his Breitbart job strike me as three different cases. CPAC first: it was stupid to invite him.

I can understand, even appreciate, how a Milo invitation looks appealing for about ten seconds. Here’s the guy whose very words sparked riots at Berkeley, the kind of thing that confers instant conservative heroism. Throw in his boldness on issues from Black Lives Matter to global jihad, wrapped in glib Brit-millennial patter, and it’s easy to see his potential for broadening the appeal of some conservative ideas.

But his caustic style, which he constantly brands with the asterisk of satire, may well have repulsed as many as it attracted. A speaking window somewhere at CPAC was justifiable. The keynote slot was not. Now one wonders if he’ll be allowed into the building.

Which brings us to another location considering his fate: his employer. Breitbart is free to cut ties with anyone whom it feels has damaged its brand, but has he? The Breitbart brand is so vague and splintered now, that it is hard to suggest that Milo has somehow caused a wave of new bad pub aimed its way.

Breitbart is the one forum where he should be able to expect a full ear for his denial of pedophilia advocacy, an argument that takes him some time, but resonates once made. There are smatterings of stories of Breitbart employees threatening to quit if he is not shown the door, but I’ll guess those are people who grew weary of his excesses long ago. My gut feeling is that this episode should not be a career-ender.

So if CPAC never should have reached out to him and Breitbart should restrain itself from jettisoning him, what about the book deal?

I would probably appreciate Simon and Schuster saying something like: “We signed Milo with the full knowledge that his views are intentionally, entertainingly incendiary. We expected his book to draw fiery reaction, and we welcome it as part of today’s many styles of political engagement, and we believe his assertions that he in no way turns a blind eye to the victimization of children.”

But that’s a lot to ask. Their job is to sell books in a nation currently filled with various hopped-up constituencies ready to wage economic warfare upon provocations large and small. I do not blame them for reducing to zero the chances of pickets swarming their midtown Manhattan headquarters.

So, the lessons? A livelihood steeped in edgy discourse has its hazards. It can reward its practitioners, but trap doors are common. Donald Trump can be elected president, surviving rhetorical moments his supporters chose to ignore. But Milo might suffer mightily as support he enjoyed mere days ago is yanked from various corners where his act grew too hot to handle. Our parents were right: life is unfair.

But if Milo Yiannopoulos is as resourceful as he seems to be, he can probably spin this into some new chapter, flaunting these latest rejections as further marketable evidence of the dangerous persona that some folks did not have the stomach for.