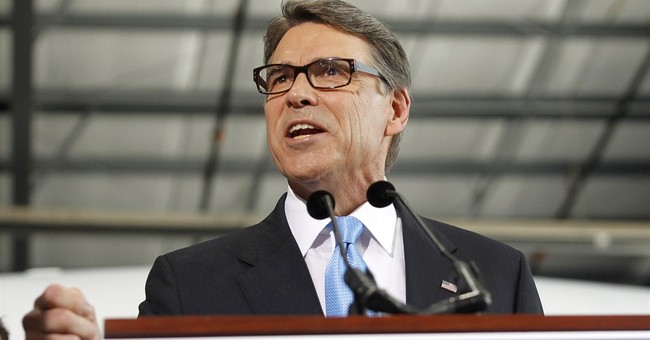 After weeks of cooling rains, the sun returned to Texas this week, baking the inside of the Addison airport hangar north of Dallas Thursday as Rick Perry teed up another presidential run.

The Republican field is already filled with some new faces, some former candidates, and some seasoned politicians who have never run before. It was challenging to see where a revamped Perry effort could make much impact.

Thursday afternoon, it got a little easier.

Of course it’s an uphill climb. In a year where Republican tastes seem to lean toward people with little (or no) elected office experience, 30 years of that experience might make for a tough sell.

But half of that was in a job that most resembles the presidency— the executive office of Governor. And Perry happens to have governed the most successful state in America, leading it deftly through the Obama years with policies that provided shields against the onslaught of bad economic governance and weak borders.

In a 28-minute re-introductory address, Perry laid out a combination of biography, experience and pure pluck that will certainly land him in the top ten in the polls, leading to a debate stage where anything can happen.

I’ll tell you what won’t happen. Oops, part 2. In that now infamous 2011 brain cramp (which I describe in excruciating detail on pages 201-202 of “Lone Star America: How Texas Can Save Our Country,” an appropriate Amazon visit right about now), Perry tripped over two killer factors, one his fault and one not. “I wasn’t prepared and I wasn’t healthy,” he told me last month at a Fort Worth luncheon for supporters, recalling the back pains that made running impossible and sleep inconsistent.

There was a third obstacle four years ago, and he owns that one too. “I was a little cocky. I had been Governor of a big, important state. How hard could this be?” Needless to say, he found out.

So it was back to being Governor of Texas for a final term that led to a signature moment in July 2014— the deployment of Texas troops to a border Barack Obama had no interest in securing.

Handing the Governor’s Mansion keys to Greg Abbott in January, Perry has spent the intervening months honing his campaign skills, his speech technique and his international acumen. The man who could not remember the third agency he would axe as President can now pivot easily from details of the Mideast landscape to the ill wisdom of easing restrictions on Cuba.

This is vital, because while governors make attractive candidates due to executive experience, they are state-level officials asking for a global-level job. Perry knows this, and layered his announcement-day speech and interviews with strong pronouncements about foreign policy. “My very first act as president,” he promised, “will be to rescind any agreement with Iran that legitimizes their quest to get a nuclear weapon.”

Perry makes clear what the problem has been. “The world has descended into a chaos of this president's own making, while his White House loyalists construct an alternative universe where ISIS is contained and Ramadi is merely a ‘setback’ – where the nature of the enemy can't be acknowledged for fear of causing offense.”

Standing behind him on the sweltering hangar stage were Navy SEAL heroes Pete Scobell, Marcus (“Lone Survivor”) Luttrell and his brother Morgan, and Chris Kyle’s widow Taya. The spirit of “American Sniper” filled the air as Perry honored these heroes and those who have fought for us in the past. He recalled a visit to Omaha Beach with his father. “On that peaceful, wind-swept setting, there lie 9,000 graves, including 45 pairs of brothers, 33 of whom are buried side by side, a father and a son, two sons of a president. They all traded their future for ours in a final act of loving sacrifice. In that American Cemetery, it is no accident each headstone faces west: west over the Atlantic, towards the nation they defended, the nation they loved, the nation they would never come home to. It struck me as I stood in the midst of those heroes that they look upon us in silent judgment. And that we must ask ourselves: are we worthy of their sacrifice?”

Perry weaves this imagery around his own military service, as an Air Force C-130 pilot in the 1970s. Every candidate will make a pitch for military votes, and for the votes of any American who laments the current downturn in America’s impact around the world. But few will be able to do it with the qualifications and supporter list he brings.

He knows he is up against U.S. Senate rock stars, including one from his own state. Knowing voters will bristle at a circular firing squad of negative attacks, Perry chose to tout his own résumé with a veiled reference aimed straight at Ted Cruz, Marco Rubio, Rand Paul and Lindsey Graham:

“Now is the time for clear-sighted, proven leadership. We have seen what happens when we elect a president based on media acclaim rather than a record of accomplishment. This will be a ‘show-me, don't tell me’ election, where voters look past the rhetoric to the real record. The question of every candidate will be this one: when have you led? Leadership is not a speech on the Senate floor. It’s not what you say, it's what you do. And we will not find the kind of leadership needed to revitalize the country by looking to the political class in Washington.”

This was powerful stuff. But let’s get real. It’s always easy to bathe in the good vibes of an announcement day. It’s what happens much later that spells success or failure, and there will only be one success in this field now swollen to double digits.

Every other candidate will one day withdraw. Perry’s job is to fend off for as long as possible any basis to be that candidate. The field is truly wide-open, but so is the abyss some candidates may fall into.

Voters may actually turn thumbs down on the swiss-cheese conservatism of Jeb Bush, Lindsey Graham and Chris Christie. Rand Paul doesn’t have enough libertarian NSA-phobes to outweigh his discordant views on national security. The whole Ben Carson thing just may not work out. Ted Cruz may not be able to expand his fervent fan base (which surely includes me). Rick Santorum, Carly Fiorina, John Kasich and Bobby Jindal may never catch fire. Lord knows George Pataki won’t. It is not so hard to see Perry still standing when GOP debate stages only hold four or five people.

And there he will be, Governor for longer than Scott Walker, more fiscally conservative than Mike Huckabee, more seasoned than Marco Rubio.

On my book tour last year, I was glad to appear on the talk show hosted by Dennis Miller, long one of my favorite pop culture commenters. But he just couldn’t get past snarky references to the “Oops” moment and what he called “the smart-girl glasses.” I love Dennis, but that analysis is about a millimeter deep.

I’m not going to proclaim Perry as the 2016 nominee in June 2015. The new faces of Rubio, Walker and Cruz offer much. Huckabee is a magnificent campaigner with a strong faith-based supporter base. And if support for all of these conservatives atomizes out to several small pockets of support, we may see that infernal Jeb Bush candidacy mop up all the way to a third straight under-inspiring nomination.

But when 5 or 6 percent in the polls can get you 5 or 6 percent away from the lead, anything is possible. In the coming months you will see a Rick Perry unslowed by back pain, unafraid to voice a bold agenda, and unfazed by the ancient history of “Oops.”