The Real Lessons of Ferguson 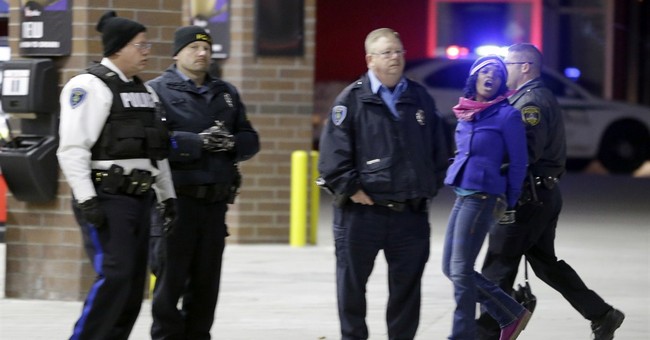 “As a black man, I was disappointed in the grand jury’s decision.”

This was one of the first sentences I heard from talk radio callers Tuesday morning, less than twelve hours after the announcement that Ferguson police officer Darren Wilson would not be indicted.

The gentleman’s first four words are a perfect indicator of the worst racial problems we face in 2014. He observed the story not through facts or evidence, but through the lens of his own blackness.

His ethnicity, not testimony heard by the grand jury, guided his opinion on a case that cried out for objectivity and even-handedness.

But those commodities are under attack in an era of race-baiting that encourages self-absorption and the stoking of ancient grievances.

When the Barack Obamas and Eric Holders of the world step out to tell us we have much work to do on race, they are right. But the racial progress we need to make is nothing like what they envision. Even Holder’s claim of national cowardice on race is correct. But he sees us as failing to recognize that America is still a racist cauldron, insufficiently matured past the 1950s. The truth is that we do not have the courage to face the real lessons of Ferguson— the real obstacles to the racial progress we should be making in the 21st century.

So here are those lessons, as important now as the lessons we learned through the civil rights heyday of the 1960s. There was an urgency in the era of Dr. King, stemming from the growing belief that we labored under a pathology of racism that needed to be cured if we were to consider ourselves a decent society.

Today’s racial poisons spring from two sources— misplaced aggression in a black community blind to racial progress, and craven opportunism from liberals of all colors who delight in the portrayal of America as a nation still in need of scolding and government-enforced corrections.

The first lesson: Large slices of black America are willfully blind to the year we live in.

When I see street thugs and rich TV pundits sharing the opinion that white supremacy is on the loose, that is not a political assertion, it s a mental illness, a blind spot to the amazing racial progress of just the last few decades. Only a stark perceptual disorder can lead someone to regard the current landscape as filled with racist white cops on the prowl for black kids to shoot.

The second lesson: Black racist hatred of white cops is cut from the same evil cloth as any white racism.

Imagine a white man concluding without evidence that black youth are just looking for that next victim to mug. Imagine that man seeing a group of young black men, presuming they are criminals merely because of their blackness. Even though examples can be found of black criminal behavior, we would scold this man for jumping to racist conclusions.

This is precisely the type of racism directed at white cops in the inner city. Its logic: A white face plus a badge must mean brutality is about to happen. We have chased stereotyping of blacks into the dank attitudinal caves where it belongs. Now we need voices to stigmatize black racist disregard of the police.

The third lesson: Fueled by this hate, some black witnesses will effortlessly lie if asked about a white police shooting of a black suspect. The Ferguson grand jury saw multiple examples of testimony wholly contradicted by the physical evidence. This reflexive dishonesty may be a result of purposeful deception designed to balance the scales of historic oppression, or a sincere error based on a common human weakness: seeing what we wish to see. In either event, it is an epidemic that threatens the black community’s journey toward enlightenment.

The fourth lesson: That journey of enlightenment must be driven from within the black community. Racist whites of fifty years ago needed more than lectures from black leaders; they needed to see their fellow whites casting off racist attitudes, joining the ranks of decency and justice.

Today, black pastors and political leaders are the ones who must patiently and caringly mold the bent perceptions of those who labor under the falsehood that white racism, in or out of a police uniform, is their worst problem.

Statistics show that black America is in far greater danger from a black criminal neighbor than from any white cop. If the hashtag #BlackLivesMatter is really true, we must start paying attention to the societal ills that are the real cause of black victimization.

The fifth lesson: America’s current national leadership is failing to deliver these vital messages. Democrats fail to lead because they wish to stoke the racial discontents that keep them in power. Republicans fail to lead out of fear that it will seem racist to address these matters. With no one in public life, certainly not the likes of predatory antagonists like Al Sharpton, encouraging goodwill and calm, it is no wonder that directionless populations default to the hatreds of the street.

The sixth lesson: Changing this sad status quo will be hard, because a racially healed America is bad news for many.

It is bad news for a media culture that thrives on racial discontent, to the point of whipping it up in environments where it is not justified.

It is bad news for politicians like Obama and Holder, because it unplugs their narrative of a sick America that needs social justice prescriptions only they can write.

It is bad news for opportunists who may have to get day jobs if the marketplace for riot-mongering dries up.

It is bad news for idle souls who lean on the crutch of white racism as an excuse for why they cannot be as productive as millions of their black brothers and sisters who have long since stopped whining about “the man.”

These are the lessons of Ferguson you will never hear from Barack Obama, Michael Eric Dyson or the white guilt trip cult at MSNBC. But if we do not learn these lessons, we will only have more Fergusons and more national tantrums to follow, because there will indeed be future white cops shooting future black people.

Sometimes the shooting will be unjustified. Sometimes it will result in a grand jury indictment, and a conviction if warranted. If that happens, justice will be done.

But for millions of Americans, justice in Ferguson was not being measured by its usual standards, as in an examination of the evidence. For mobs in the streets and pundits on network studio sets, the bar of justice was set only at the delivery of a white cop’s head on a platter, no matter what happened the night of Michael Brown’s shooting.

That is the racial sickness of today. The sad thing is that even as Selma protesters were hosed and beaten in 1965, American attitudes were on the threshold of evolving in short order into a wisdom that would not allow such things to ever happen again.

Where is the wisdom that will reform today’s racist haters of white cops? Where is the President who will support our system of justice rather than take political sides even when the system has spoken? Where is the media culture that will show restraint in an attempt to foster logic and reason?

In the absence of these things, our journey toward mature and healthy race relations will be prolonged and painful. But we must never tire. We must overcome.