The Other Scottish Decision 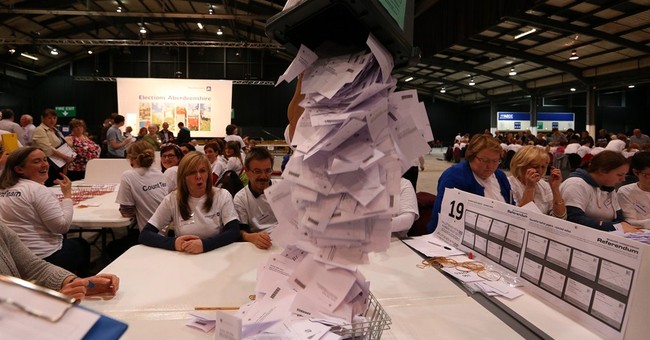 While Scotland’s voters weighed whether to separate from the United Kingdom Thursday, another decision involved its most famous institution separating from 260 years of tradition.

The Royal and Ancient Golf Club of St. Andrews voted overwhelmingly to admit women, echoing a similar decision at the far younger Augusta National Golf Club in 2012. In both cases, a private organization made a decision it was entitled to make. But the environment surrounding both decisions, and the reactions thereafter, paint a disturbing portrait of a thickening cultural fog.

Let us begin with a premise that will drop jaws on both sides of the Atlantic: If a private golf club wishes to admit women, that is perfectly fine, but so is the decision to remain all-male.

There is great value in single-gender associative environments, a concept currently groaning under the jackboots of the Equality Police. The brownshirts of this brigade roam in constant vigilance, hammering down the differences between men and women, heterosexual and homosexual marriage, even productivity and sloth.

But while the thoroughly phony issues of “income inequality” and the status of marriage are the stuff of government policy, the admissions policies of iconic golf courses are purely the business of individuals.

And if individuals at St. Andrews wish to dismantle the singularly male membership in place since the reign of George III, they surely may. But was this decision a product of true objectivity and clarity, or did the membership wilt under the pressure of the politically correct hordes who had been badgering them for generations that failure to admit women was somehow an act of misogyny?

One would like to believe that the proud members of St. Andrews voted because they actively wished to extinguish their centuries of example of iconic male-only membership. Many surely did, perhaps the majority.

But the radical forces intolerant of such freedom of association carry sharp pitchforks, and members may have grown tired of the prods of many decades.

Consider the tone of many of the stories leading up to the vote. “Will the ban on women end?” asked one headline. Once the vote was in, the St. Andrews twitter hashtag burst alive with cries of “About time!,” as if some intolerable oppression had been lifted.

It requires focused intellectual clarity to recognize that it is fine for men to have places where they wish to associate solely with each other. It is also fine— and enormously enjoyable, I am told— for women to seek various female-only enclaves unfettered by the wholly different chemistry of men.

The differences between men and women are a gift from God. Those differences are what make martial unions a divinely complementary concept. But those same differences bring instant atmospheric change when a population of interacting women is seasoned by the injection of men, or male companionship by the introduction of women.

Virtually every establishment of every type is properly open to men and women, where both sexes interact in the normal rhythms of the world at large. But if every once in a great while, there is a group of men who want to play golf among a chosen community of other men, they should be able to do so without the scolding of busybodies seeking to impose their whims in areas which are none of their business.

The energy of these meddlers is driven by the notion that a male-only golf club is an affront to women, hence the false language of bans and exclusions.

Women were no more banned from St. Andrews than sushi is banned from pizzerias. The pizzeria menu contains no sushi not because the proprietors hate sushi; they are running a pizza place. Male-only golf clubs (or social clubs or bowling leagues or their women-only counterparts) seek only to maintain the unique atmosphere of a single-sex setting, which some people find desirable in some sliver of their lives.

Denying people those choices by hectoring them into submission is one of today’s most noxious behavioral trends.

Sticking up for single-gender environments will often yield the taunt that it is the same as racial exclusions. This is the height of foolishness. There is no meaningful difference that arises necessarily from associating with people of different races. Ethnicity can bring many differences in tastes, attitudes and even behaviors, but they are not automatic. A whites-only golf club has made the statement that it simply wishes to avoid the proximity of minorities, an obvious shaft of racism.

But the nurturing of the occasional single-sex experience is in fact an acknowledgment, even a celebration of the sublime differences between manhood and womanhood. The desirable chemistry of this dynamic extends even to various schools which achieve inspiring order by separating the boys from the girls.

Shall we pillory women’s colleges as reflexively hostile to manhood? Some surely are, but that is due to the twisted politics of the curricula, not the mere absence of men.

So this is not a cry of certainty that the men of St. Andrews were arm-twisted into admitting women, Let’s give those high-toned lads the benefit of the doubt of sincerity.

Let us reserve our disapproval for those who portray this as the end of some unendurable evil, and who will surely torment future examples of institutions wishing to allow only men or women for the joyful sake of satisfying those who wish such an experience.

Nothing irks the gender fascists like the possibility that someone, somewhere might be enjoying some liberty that does not meet their approval. As the Augustas and Royal and Ancients bend to modern peevishness, we should hope that somewhere there will survive a tolerance, maybe even an appreciation for the occasional pursuit featuring men associating with other men and women with other women.

The forced obliteration of such practices is part of the larger gender-norming scourge which will reach far beyond golf courses and into any corner of human life that tries to exalt and celebrate the differences between men and women.