Our Moment Has Arrived: All Hands On Deck to Slay Obamacare 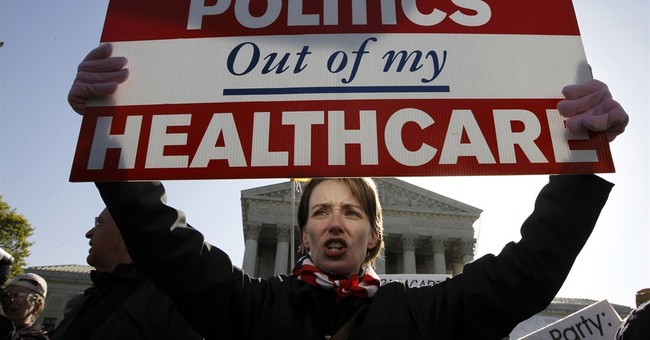 A riveting day has dawned. House Speaker John Boehner, long criticized for inconsistent conservative passion, is actually allowing members to vote on a budget bill that ties continued government operations to a defunding of Obamacare.

This would be the strategy Ted Cruz and his allies have been offering for weeks, earning them harsh criticism from Democrats and timid Republicans alike.

The House, run by Republicans, will pass the measure. The Senate, run by Democrats, will not. No matter what those votes might be, a presidential veto pen stands ready to kill the whole idea of a bill that funds the government past October 1 with the glaring omission of Obamacare.

So why even try this? Won’t it freak people out? Won’t the media hate us? Won’t some voters call us obstructionists?

After decades of inconsistent conservative leadership, there are finally people in office with the guts to take bold stands unseen since Reagan-- maybe unseen since Goldwater.

After endless years of half-measures and middling efforts, unapologetically muscular conservatism is going to cause some alarm. It will startle Democrats, who have long enjoyed rolling a Republican party that’s been there to be had, and it will positively terrify establishment Republicans, who see that their conservative batting averages are suddenly insufficient.

As for the media, I could not possibly care less what they think. Are we really going to plot strategy so as not to draw fire from liberal network anchors and faux conservative pundits currying favor at Georgetown parties?

Shrinking from what conservatism requires because we fear negative media reaction is like guiding foreign policy to avoid making terrorists mad. In both cases, guess what? They already hate us. We should do the right thing and let the chips fall where they may.

While we can, and should, tell the media where to take a walk, we do actually have to care about voters. But again, operating from a foundation of fear is completely wrong.

Rather than lose sleep over what independents will think of a government shutdown, let us march forward with votes in both congressional chambers, telling President Obama, every Democrat and every voter that Obamacare is an unprecedented scourge that requires the strongest negative response.

The sound and feel of passion like that will energize millions of conservative voters weary of season after season of caves and compromises. It should also earn the respect of moderates and independents who may be ambivalent about Obamacare but surely appreciate the rare spectacle of politicians showing some spine.

As for charges of obstructionism, the public needs a history lesson. Rarely have we soared so high as when we have stood in opposition to bad things. We stopped slavery. We stopped Hitler. We stopped Saddam’s rape of Kuwait.

Now we must stop the prospect of government robbing us of free market health care decisions. The time will come for suggestions on how to reform insurance and manage safety nets for the truly needy. Before we begin to stripe that field, we must slay the beast of Obamacare. At last it seems we have warriors willing to do so.

But now we get to the familiar Republican habit of exploding differences of strategy and nuance into bitter grudges.

As a fan of the Cruz approach, I winced when he lobbed charges of “surrender” at those who sought a more measured, line-by-line dismantling of the Affordable Care Act.

Conversely, it is unsettling (and, quite frankly, stupid) for the more pragmatic Republicans to blast Cruz and his nervier colleagues as “out of touch with reality.”

Everyone knows Senate passage of a continuing resolution without Obamacare funding is the longest of shots. But here’s some “reality” for everyone: there is singular value in standing for something when the odds are against you. Against a longtime norm of leaders leaning in the direction of prevailing winds, such courage is downright remarkable.

Every Republican in the House and Senate should vote for the immediate defunding of Obamacare, period. If fate dictates this strategy should fall short at this moment, the party should dust itself off, warm with the glow of having cast the right vote.

Then it will be time for the next phase of Republican unity-- the pivot from sledgehammer to scalpel as the party dives into the tangled mess of this poisonous legislation and dismantles it brick by brick.