War on Hispanics, My Foot 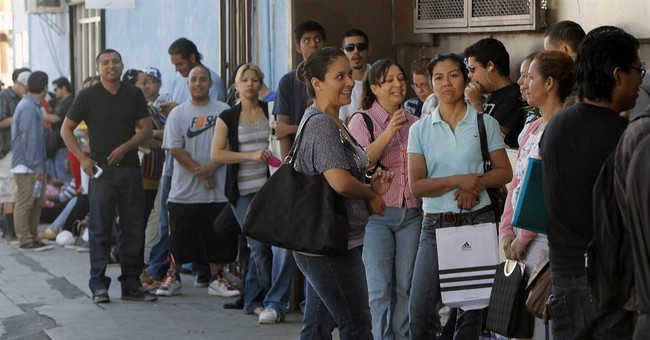 For a movement that gets queasy at the thought of most war, the modern left surely fancies itself as experts on what war looks like-- and through their eyes, war breaks out at the very glint of opposition to their agenda.

Stand up for the unborn, and you are engaged in a “War on Women.” Stand up for traditional marriage, and it is an act of war against gay people.

So get ready for the summer of “War on Hispanics,” the battle garb painted on any conservative expressing conservative views on immigration, and just about anything else, for that matter.

I suppose they revisit this low tactic because it works. The left already feels that it is an offense against womanhood to suggest that future women should not be aborted, so they have to enjoy the occasions when low-information voters buy into the sorry logic that one honors women only when allowing them to terminate pregnancies.

The so-called war against gays consists only in the form of opposing a radical gay agenda that seeks to equate gay and straight marriage, or shoehorn gay Boy Scouts into an organization that wished to avoid sexualizing its young ranks.

But ask a cross-section of half-attentive Americans about conservatives, and many will say our policies disserve women or are an act of hate against gays.

So why not complete the trifecta with a wholly concocted “War on Hispanics?” Intellectual dishonesty is apparently not a barrier.

The goal is to identify liberalism as the only safe home for the interests of certain constituencies. Among black voters, this is a huge success, with any Democrat candidate likely to receive roughly 90 percent of the black vote.

The “War on Women” was a big player in 2012, even though the Republican party has a large force of up-and-coming female stars, compared to the droning dowagers that pass for the women’s leadership in the Democratic party.

While the fabrication of the “War on Women” rested primarily on the ghoulish euphemism of “reproductive rights,” the “War on Hispanics” is more broadly manufactured.

It rests not only on the lie that conservatives are hostile to Latinos, but on the larger myth that opposition to big government is somehow ethnically offensive.

There is no doubt that most Hispanics favor taxpayer-funded health care and government funded jobs programs. But that comes from their liberal minds, not their brown skin.

Therein lies the racism of this “war” language. It denies Hispanic status to anyone failing to embrace leftist dogma. The message: Oppose Obama or LULAC on any way, take one step toward conservatism and you become a self-loathing traitor to your race.

This is a familiar song from the liberal hymnal. Ask the blacks made to feel less black by race-baiters seeking to embarrass black conservatives. Ask the women told with straight faces that they are somehow less female if they do not worship at the altar of planned parenthood.

This not a war against any group. It is a battle against liberalism. If you are a liberal Hispanic, a liberal woman, a liberal homosexual, a liberal Eskimo or a liberal martian, conservatism will oppose you.

But join the ranks of conservatives, and not only does your status not matter, we will embrace it, with a sincerity long foreign to the left.

The right is thrilled at the slightest shred of evidence that Hispanics are joining the push to restore liberty and constitutional government.

Tea party groups are well aware of the vast whiteness of their membership. They would love nothing more than to join hands with minority members who wish to join the fight against confiscatory taxes and runaway government.

From domestic leaders like Sarah Palin to world titans like Margaret Thatcher, we are particularly energized and appreciative when women break with the majority of their sisters and realize that conservatism is best for both sexes.

There is indeed a war in progress, but it is not a race war or a gender war. It is a battle of ideas, which scares the left to its bones.

They would rather not defend the sorry track record of big government or their morally suspect social views. Better to demonize opponents as bad people.

The assault on logic makes no difference. They will look at a conservative woman and tell her she is waging war on women. They will tell conservative Hispanics tat they are at war against their own race.

One can hope that this will fail miserably, but it will probably see early success. To fight it, as the immigration battle looms, we will need every conservative Hispanic man and woman to rise up and reject the racist insult that they somehow dishonor their heritage by embracing limited government and free markets-- or strong borders.

Hispanics are already strongly socially conservative, as are the African-Americans who continue to vote by the millions in opposition to what most hear in church on Sunday.

The liberal expectation is that conservative arguments made by candidates in 2014 and 2016 will continue to send Hispanic votes to the Democratic party. There is that danger.

But if the conservative message is about liberty, values and real equality of opportunity, it can attract voters of all races.

Ultimately, the Hispanic gripe against Republicans is not about immigration. Not every Latino voter is soft on borders or cavalier about those who break the law to get here. Just like liberals of any race, they are fans of profligate spending and government overreach. Convincing them of the ill wisdom of those things requires the same argument one would use with someone of any race. It is the language of liberty.

The struggle to attract them to those causes is just, and has nothing to do with race. There is indeed a war on; it is a battle to save our nation. The soldiers needed to fight that war or of every color, religion and gender.

Let’s draw the lines of engagement where they belong, in the arenas of policies and ideas, and reject the insulting notion that it is an offense against any group to simply be conservative.