Who Works at the Minimum Wage? 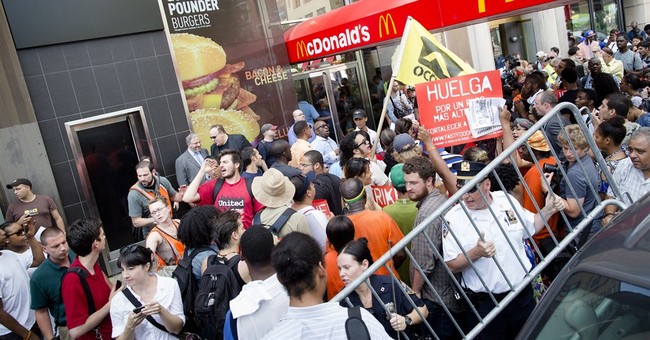 Recent protests by fast food workers have renewed interest in the minimum wage. Often, these protests focus on the inability of an individual worker to support a family on the minimum wage. Such a question spurred McDonald’s to release a mock budget for low wage workers. McDonald’s first mistake, however, was in accepting the premise of the question.

Whoever claimed the minimum wage was supposed to be enough to support a family? Certainly, when I started my first job flipping burgers at Burger King, I didn’t take that job expecting to support a family. It was an avenue to earn some spending money (I wasn’t born a Kennedy, so my family could not provide a generous allowance) and a way to learn some basic job skills.  I haven’t been alone in viewing minimum wage restaurants jobs in that light. According to the Bureau of Labor Statistics, in 2012 (latest numbers) over half of minimum wage workers are under age 25. In fact, only 3 percent of workers over the age of 25 earn at or below the minimum wage. Two-thirds of minimum wage workers only work part-time, again illustrating the point that these jobs aren’t viewed as a career but rather the first rung on the job latter.

Even if all minimum wage workers were trying to support a family on their own, I ultimately do not believe it’s the role of the government to inject itself into consensual private agreements. Nor do I believe it’s the role of the government to pick sides in private disputes. The government has no more moral authority to choose the “right” wage for someone than I do. Only free individuals can make those choices for themselves. Even if it wasn’t a policy choice about freedom of contract, do we really want, as a matter of policy, to encourage a large portion of individuals in their 30s and 40s to make a career of flipping burgers?  I certainly didn’t start my job at Burger King with the intention of staying.