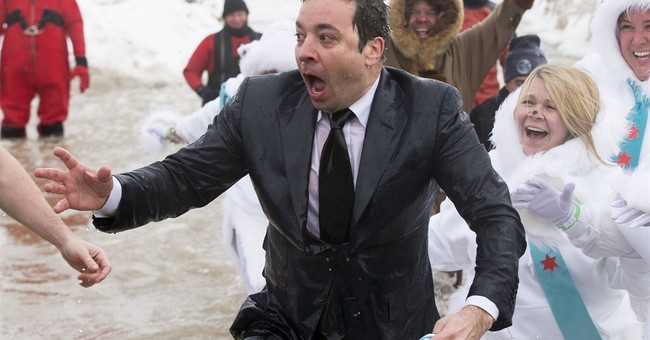 I have long been a fan of yours, from your SNL character Sully (“Tommy, please tell me you got that!”) to the best skit of all time, Cowbell. You appear in one of my top 10 movie picks (Almost Famous) and I much enjoyed the uniqueness of Late Night with Jimmy Fallon. And last month I was delighted to see you take on the enormous role of replacing Jay Leno as host of the Tonight Show.

The Tonight Show is an American institution that seems to belong to all of us. And it was like we all kind of picked you for the position by liking you above all the other possible candidates. As you can appreciate, Mr. Fallon, delivering the Tonight Show monologue to America every weeknight is a tremendous responsibility. So if you don’t mind, I have some advice that will hopefully go a long way in keeping you from messing it up.

There was a lot to love about your immediate predecessor, Jay Leno. He was personable, his delivery was great, and he worked hard to provide a full evening of entertainment. But Jay fell short in one area that became a reliable source of annoyance five nights per week for me and several million other patriots.

Jay Leno was blindly ignorant and bigoted in matters of American civics. Even while making fun of everyday folks for their lack of knowledge in U.S. history, Jay would frequently reveal his own illiteracy on the topic. By living exclusively within the entertainment terrarium, he did not realize how isolated and stale that his social cognizance had become. So 85% of the time, his comedy was clever. And 15% of the time, he made himself look like an unenlightened boob.

Advice #1: Understand America. Expose yourself to the political right. Folks in the entertainment industry live in their own incestuous culture on the hard left. Because they do not mix with the common folk, they do not relate to everyday sensibilities. You are great with pop culture, social media, and all that. But your viewing audience is not limited to the under-40 crowd living in a coastal city. Make listening to Rush Limbaugh, Dennis Prager, or Dennis Miller a part of your week (yes, really). Understand the fear that people face daily in losing liberties to an aggressive government, finding work, protecting their children, keeping their homes, and caring for their aging parents.

Advice #2: Avoid advancing political propaganda. Get yourself well-informed regarding the truth about stories that provide easy standup material. It drives educated viewers nuts when comedians keep falsehoods alive. Chris Christie did not shut down the George Washington bridge. And George HW Bush was not unaware of barcode scanning technology. Treat such rumors with the same care that you would give to the location of Barack Obama’s birth.

Advice #3: Balance criticism. Not everyone thinks that Sarah Palin is an idiot. Try to get your head around this one: In every measurable way, Sarah Palin is immensely brighter than Barack Obama. She knows how to pronounce corps, how to spell R-E-S-P-E-C-T and how many states there are. When giving famous personalities a good jab in the ribs, I recommend that you follow the example of South Park creator and writer Trey Parker. If you are going to make fun of Christians or Mormons, poke at Scientologists and Muslims just as hard. We can all laugh at ourselves when we believe that we are not being cruelly singled out.

Advice #4: Try sophistication with political humor. A well-crafted zinger will get people thinking rather than loathing. The quips of Mark Twain are cutting, but fondly memorable.

Advice #5: Be respectful of all elected officials. To be sure, not elected officials are created equal. But they are loved by the number of people who cast a vote for them. Jay Leno lost credibility with the viewing audience when they saw the difference between how he treated guests Newt Gingrich vis-à-vis Barack Obama. Leno interrogated Gingrich like a White House Press Corps journalist. But after Obama left the couch, Leno could be seen embracing the cushion where the President had been sitting.

Advice #6: Use your platform to humanize politicians. Mr. Fallon, among your many gifts, you are great at bringing out the real personalities of famous folks. By interacting with celebrities like no other host we have ever seen, we learn about their playfulness and their hidden talents. I encourage you to continue this practice to help us get to know the human side of the more lofty notabilities.

Advice #7: Develop perspective. Your personal music repertoire is astonishing. If you were to develop a similar depth of understanding in history, science, economics and faith, you will recognize selfish agendas and avoid serving as the comedic lackey for the vogue du jour. Read respectable, non-fad books. It will sharpen your wit, help you to avoid offending sensitivities, and increase your following.

Mr. Fallon, you now live in rarified air, breathed by merely five others in the sixty-year history of the Tonight Show. Your talents, good looks, hard work and diligence brought you to this place at the early milestone of 39 years old. You can return the blessing by investing in your capacity to deliver sagacity through jest. Or, you can take turns with David Letterman, pulling each others’ finger. I hope that you compose thoughts worthy of being the last words heard by Americans before they fall asleep every night.

I wish you well.