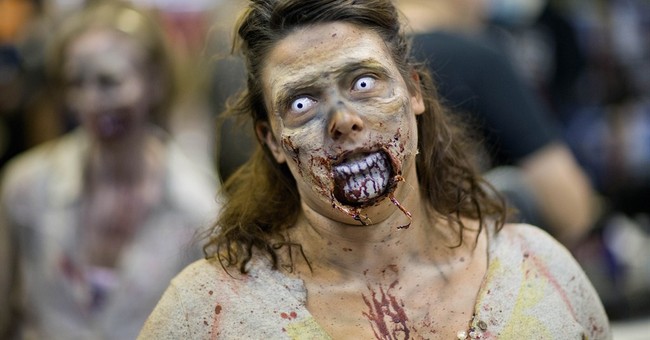 Republican activists seem to be pausing in a moment of introspection as they stare down at the smoldering, twisted frame of the buckled Democratic Tower of Babel. While every conservative American expected failure in Obamacare, no one anticipated such an immediate collapse.

As America comes to the realization that we are at least three years away from any chance of recovering America’s health insurance industry, Republicans are asking themselves if they could have done anything different to prevent the Democratic-Party-imposed catastrophe. And the conclusion is the old adage that if they don’t win elections, they don’t get to drive the agenda.

I have arrived at the deduction that this Washington D.C. quandary comes as result of the Zombie Effect. Yeah, I said it: zombies.

While Republicans engage in numerous internal debates, Democrats more simply win elections through mass compliance. Republicans argue the finer points of liberty amongst themselves while Democratic rank and file readily submit their voting decisions to the will of the party bokor (zombie mind controller).

This Zombie Effect was first documented in the 1940’s film The Ghost Breakers. Richard Carlson’s character describes the undead as, “It’s worse than horrible because a zombie has no will of his own. You see them sometimes walking around blindly with dead eyes, following orders, not knowing what they do, not caring.” In immediate response, Bob Hope quips, “You mean like Democrats?” (See the brief film clip by clicking here).

The bewildered Republicans are coming to the realization that their internal party contentions are in reality a battle against that same looming Zombie Effect. As everyone who studies this topic well understands, the greatest risk in battling zombies is becoming one yourself.

Therein lies the pinnacle test. Republicans well understand that choosing fellow citizens to send into battle is the most critical challenge. Once elected, representatives are in office for years and will need to withstand all manner of attack, including temptation – because zombieism, as it turns out, is not a partisan disease.

It is my experience that the prime objective for most candidates is simply their desire to hold elected office, as in, “It would be so cool to hear people call me ‘Senator.’” This temperament is an indicator that the candidate is at high-risk of contracting the politically-transmitted disease. There is a distinct and lasting difference between someone who dreams of getting elected and someone who holds an ideological conviction.

While the Democratic Party has certainly perfected the intentional spread of infection, it appears evident that the more time that anyone holds office, the greater their exposure to the zombie pathogen. So the battle over philosophical faithfulness in a candidate is indeed the worthy internal debate. While liberty lovers will test candidates for their political propriety, carriers of the virus from either party will tend to invite ambitious personalities who are more readily susceptible to infection.

I appreciate that the Republican Party Platform does not advance a mission of winning elected offices at all costs. Rather, an assurance of liberty is the notion to be advanced, effected through reliable and principled elected representatives who understand the laws of nature and who revere nature’s God as the exclusive source of those liberties. I believe that it is time that Republicans spend more energy on recruiting folks into elections who are proven to hold sound ideology rather than just reactively investigating ambitious people.

As stated on the Centers for Disease Control and Prevention website (www.cdc.gov/phpr/zombies.htm), “We continue to reach and engage a wide variety of audiences on all hazards preparedness via Zombie Preparedness; and as our own director, Dr. Ali Khan, notes, ‘If you are generally well equipped to deal with a zombie apocalypse you will be prepared for a hurricane, pandemic, earthquake, or terrorist attack.’ So please log on, get a kit, make a plan, and be prepared!”