GOP as the Mustang II 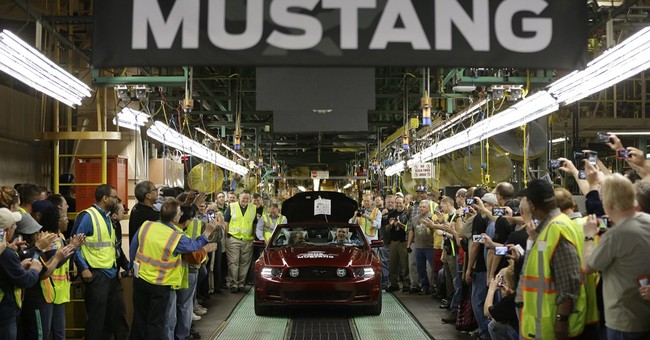 On April 17, 1964 at the New York World's Fair, Ford introduced the Mustang.  It was athletic, uncomplicated and inspired.  The urbane sport was an immediate success, selling far more models in its first two years than Ford management had ever hoped.

But somewhere around the ten-year mark, the Ford team lost its way.  Oil prices skyrocketed, thanks to the manipulations of the OPEC countries.  The demand for high-mileage commuters gave Japanese cars a firm foothold in the American market.  So in 1974, Ford introduced the Mustang II.  It was an 83 horsepower, four-cylinder shadow of the original with an optional vinyl roof.

In its first year, the Mustang II actually sold well.  But in its second year, sales dropped 49%.  F-o-r-t-y n-i-n-e percent.  The automotive experts at Edmunds describe it like this: “Everyone hates the Mustang II. It was too small, underpowered, handled poorly, terribly put together, ill-proportioned, chintzy in its details and altogether subpar.”

From the perspective of 2013, this story does have a happy ending.  Right about the time that Alan Mulally took the wheel as CEO, Ford introduced the 9th Generation Mustang.  What a gorgeous car – and utterly loyal to its mid-sixties avant-garde original.  Introducing this beast frustrates the greenies.  If Ford had made this move in 1974, their heads would have exploded.

The Republican Party seems to be going through its Mustang II phase now, and I wish it would hurry out of it.  There is SO much important work to be done, all of which involves countervailing the Democratic Party.

Like the Ford Motor Company of the mid-seventies, the GOP needs to be reminded who they are.  Their history is one of honor and greatness; the party of Abraham Lincoln, Martin Luther King, and Ronald Reagan.

From health care to immigration, Republican leadership needs to move from passive-aggression to courage. They need to spend more energy enacting conservative principles so that they don’t have to spend so much time defending against liberal aggression.  GOP leadership should focus on defending and preserving the Constitution and stop worrying about remaining in office.

Democratic Senator Chuck Schumer was toying with the rudderless Republicans last week on Fox News Sunday. Regarding immigration, he said to host John Roberts, “The national Republican leadership will tell John Boehner, if you don’t pass a bill, we’re going to be a minority party for a decade.”  It is disturbing that a Democratic Senator would publicly suggest strategic advice to the Republicans.  It is disturbing because they just might take it.

One bright ray of hope consistently shines from southern lawyer turned congressman Trey Gowdy of South Carolina.  “I was moved, almost to the point of tears, by Senator Schumer’s concern for the future prospects of the Republican party.” Thank you, Congressman Gowdy.  Get in that Mustang and leave plenty of rubber on the street behind you.

If the right people are not hating you, how can you possibly be making a worthy difference in the world?