Excerpt: Life Is Winning – Inside the Fight for Unborn Children and Their Mothers

Marjorie Dannenfelser
|
Posted: Aug 25, 2020 12:01 AM
Share   Tweet
The opinions expressed by columnists are their own and do not necessarily represent the views of Townhall.com. 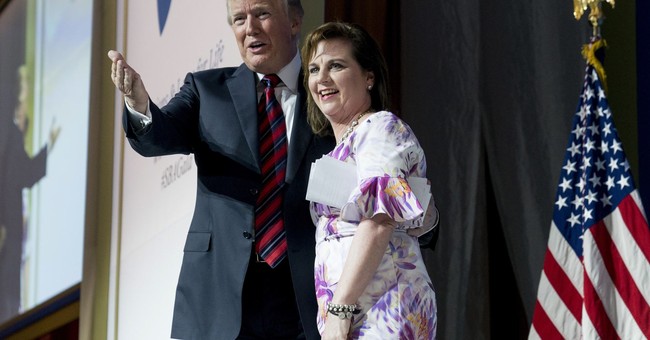 Editor's note: The following is an excerpt from "Life Is Winning: Inside the Fight for Unborn Children and Their Mothers" by Marjorie Dannenfelser.

The CMP videos powerfully confirmed the truth about Planned Parenthood, one it works assiduously to conceal: its business is abortion, not women’s health care. Indeed, a look at the organization’s history reveals that its primary objective has never been serving the health needs of disadvantaged women and families but something much darker. Planned Parenthood founder Margaret Sanger wrote in theNew York Timesin 1923 that her goal was the “release and cultivation of the better elements in our society and the gradual suppression, elimination and eventual extinction of defective stock—those human weeds which threaten the blossoming of the finest flowers of American civilization.” Today that eugenic mission is carried out through discriminatory abortions targeting babies diagnosed with genetic diseases, a practice that is putting children born with Down syndrome on the road to extinction, as is already happening in Iceland. The abortion industry’s most frequent victims in the United States are African Americans; 38 percent of all abortions are performed on black women, even though they make up only about 14 percent of the female population in America—a disparity that has increased even as the overall abortion rate has decreased significantly thanks to pro-life efforts. In New York City, which has one of the nation’s highest abortion rates, more black babies are aborted than born alive—an unfathomable tragedy for this community that has suffered and overcome so many injustices.

In terms of the provision of legitimate health care services, the abortion giant is an insignificant player. Charlotte Lozier Institute found that Planned Parenthood provides just 1 percent of HIV tests and Pap tests performed in America but dominates the abortion market, carrying out approximately 40 percent of all abortions in the nation. The pro-life group Live Action called Planned Parenthood facilities and found ninety-two of ninety-seven admitted they don’t do any prenatal care at all. “No, we don’t do prenatal services. I mean, it’s called Planned Parenthood, I know it’s kind of deceiving,” a Merrillville, Indiana, Planned Parenthood worker confessed. Its former president, Cecile Richards, even had to admit under oath that her organization does not do mammograms, as is so often claimed in its defense. In 2019, Richards’s successor was fired after less than a year for attempting to steer the organization away from abortion as its central mission—if not in practice, at least in word.

I met David Daleiden, the man behind the videos that sparked a national conversation on late-term abortion and the true priorities of the abortion industry, at a conference in California in July 2015, soon after the first video was released. The videos were a complete surprise to me and to many others in the pro-life movement; behind the scenes, this courageous, creative, and brilliant man had built a devastating case against the abortion industry, using the words of its own high priestesses to expose the moral rot at its core. He had the quiet calm of a solitary monk who recently emerged from the desert. I was amazed by the story of this man taking years out of his young life to prepare for and live out his deep cover as a part of the abortion industry in order to bring its crimes to light, and I was humbled by his trust and optimism that justice would be done.

The abortion industry, unable to refute or defend what was revealed in the CMP videos, struck back at the messenger with fury, challenging Daleiden’s serenity and confidence. Adversaries filed politically motivated criminal charges against Daleiden in Texas and California. Although the Texas charges were dropped, Daleiden and his colleague Sandra Merritt were hit with fifteen felony charges in California state court in a criminal case initiated by then attorney general Kamala Harris and taken up by her successor, Xavier Becerra—both abortion industry allies. Six of those charges were subsequently dropped. Apparently in California, the First Amendment rights of journalists to work undercover don’t extend to pro-lifers; even theLos Angeles Times editorialized that it is “disturbingly aggressive for Becerra to apply this criminal statute to people who were trying to influence a contested issue of public policy.” Even so, the trial elicited a stunning testimony that a Planned Parenthood baby parts buyer sold the “beating hearts” and fully intact heads of innocent children killed in potentially illegal abortions. Meanwhile, Planned Parenthood and the National Abortion Federation filed civil lawsuits in federal court. In a profoundly unjust verdict engineered by a proabortion activist judge, CMP was ordered to pay Planned Parenthood more than $2.2 million in damages. CMP’s fight continues.

In 2016, pro-life voters helped elect a pro-life president, who explicitly promised to defund Planned Parenthood. What could be more emblematic of the “swamp” in need of draining than an organization that donates millions to politicians to influence their votes in favor of a half-billion-dollar yearly subsidy from the taxpayer? The subsidy is spent to maintain the nation’s largest abortion network, which uses abortions to increase revenue—a horrifying practice exposed by former Planned Parenthood director and pro-life convert Abby Johnson in 2011—and supplements that income by illegally selling off the body parts of the unborn babies it kills, as revealed in the CMP videos.

While many important pro-life legislative initiatives face the hurdle of requiring a supermajority to avoid a filibuster in the Senate, it only takes a simple majority to stop taxpayer subsidies to Planned Parenthood through a budget reconciliation bill that cannot be filibustered. With pro-life majorities in the House and Senate who had voted to defund Planned Parenthood in the past and a president who campaigned on a promise to sign the bill, it should have been an easy and quick victory.

Instead, Planned Parenthood funding wound up being part of a larger effort to repeal Obamacare, including its expansion of abortion funding, the issue that so many pro-life Democrats had lost their seats over in 2010. As I sat with David Daleiden and Frank Cannon outside the Senate chamber late at night in July 2017, lobbying senators as they shuttled in and out, the outcome of the vote was more in doubt than it should have been. Senator John McCain dramatically cast the deciding vote with a thumbs-down gesture. Obamacare’s abortion funding and Planned Parenthood’s taxpayer subsidy would—for the time being, at least—remain in place. But McCain’s vote would have been meaningless if it were not for the votes of two proabortion womens enators—Republicans Susan Collins of Maine and Lisa Murkowski of Alaska. SBA List, since its founding, helped elect dozens of pro-life women to the House, Senate, and statewide office and defeated as many proabortion women. But the fact that there still are women in Congress who buy into the lie that feminism requires women to sacrifice their own children at the altar of abortion means we still have work to do.