Marjorie Dannenfelser
|
Posted: Jul 09, 2019 12:01 AM
Share   Tweet
The opinions expressed by columnists are their own and do not necessarily represent the views of Townhall.com. 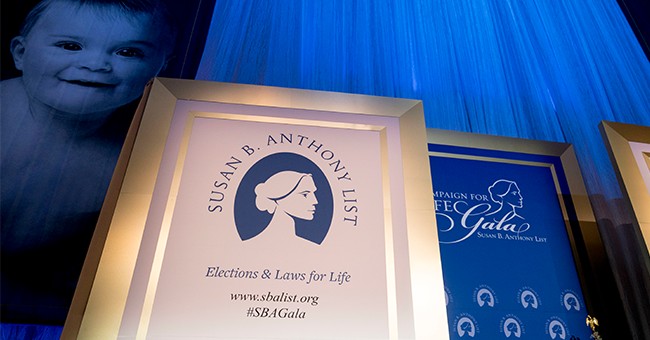 As a native of Greenville, North Carolina and the leader of the nation’s largest pro-life political organization, I was so encouraged to see Joe Anne Jones set the record straight about her late husband Congressman Walter Jones’ wishes and publicly back Dr. Joan Perry. I believe this was a pivotal moment in a vitally important election not only for North Carolinians, but for pro-life advocates around the country hoping to see an articulate champion for unborn children and their mothers advance toward Congress in the primary runoff this Tuesday.

Mrs. Jones was absolutely right: Dr. Perry has what it takes to stand up for North Carolina values in Washington. A political outsider running for office for the first time, Joan put her pro-life convictions front and center and defeated 15 other candidates to advance to the runoff. She’s one of the most dynamic candidates I’ve ever met. In addition to caring for local children and families for 30 years as a pediatrician, she has served her community admirably, leading Bible studies and ministries for women and young people and housing over 25 youth and young adults in her own home. She’s a world-class triathlete who competed in international championships on Team USA. Her performance in the political arena shows that when strong women leaders campaign on a bold pro-life platform – and when they have the support they need and deserve early on – they have the power to win big.

From the outset, SBA List recognized Dr. Perry’s enormous potential and went all in. Our Candidate Fund was the first national group to endorse her – an early commitment that encouraged other national groups and leaders, including Winning for Women, VIEW PAC, Rep. Virginia Foxx, Rep. Cathy McMorris Rodgers, Rep. Ann Wagner, Rep. Vicky Hartzler, Rep. Debbie Lesko, U.S. Senators Cindy Hyde-Smith and Joni Ernst, and most recently Sarah Palin to come out for her during this critical time. Since April our partner PAC, Women Speak Out has invested more than $300,000 to mobilize pro-life voters to support Joan.

Whoever wins this runoff is likely to be North Carolina’s next representative in Washington. Dr. Perry’s election would send an unmistakable message to extremist Democrats who have shamefully blocked the Born-Alive Abortion Survivors Protection Act – compassionate, popular legislation that simply requires that babies who survive abortions be given the same lifesaving medical care as any other baby born prematurely at the same age – and who support forcing taxpayers to pay for abortion on demand through the moment of birth. I have no doubt whatsoever that if Joan Perry was in Congress today, she would be a leading proponent of protections for abortion survivors, ending cruel late-term abortions, and stopping taxpayer dollars from being funneled to the abortion industry.

In North Carolina and nationwide, momentum is on the side of protecting the unborn and standing up to the radical abortion lobby. North Carolinians need and deserve Joan Perry’s fearless voice in the House, where the fallacious arguments traditionally used to shout down and silence pro-life advocates – that we are allegedly against women and against science – will be exposed for the lie they are.

Pro-life voters of North Carolina, it’s time to redouble our commitment to getting Dr. Perry across the finish line. I am proud to stand with her and I urge everyone in the 3rd District to get out to the polls on Tuesday and support her once again.