Marjorie Dannenfelser
|
Posted: Oct 17, 2018 1:27 PM
Share   Tweet
The opinions expressed by columnists are their own and do not necessarily represent the views of Townhall.com. 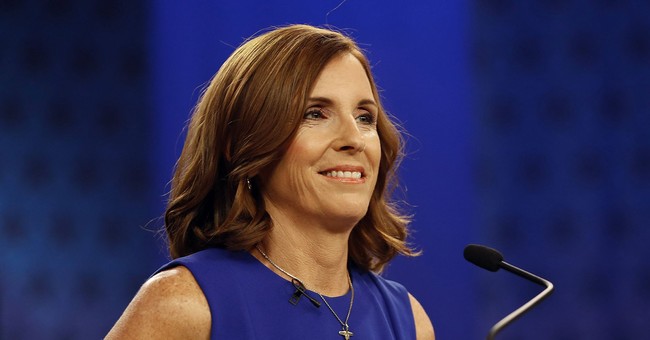 This year’s high-stakes midterm elections are fast approaching, and much ink has been spilled about a surge in women candidates running for office. Unfortunately, most of the hype has focused on only one type of woman: anti-Trump, pro-abortion, and angry about it.

What about the millions of women and men who are eager to see more protections for unborn children and their mothers – who revere the Constitution and want more fair, impartial judges like Justice Kavanaugh appointed? Who is running to represent folks who not only decline the pink hats and handmaid outfits, but are happy about the direction the country is headed under President Trump and want it to continue?

Americans desperately want more common sense in politics – so I am excited to support six highly accomplished, courageous pro-life women leaders who will bring an infusion of common sense to the U.S. Senate with their conservative principles. Here is who they are and how you can help them win.

In Wisconsin, Leah Vukmir is challenging incumbent Senator Tammy Baldwin. Baldwin apparently isn’t used to having to defend her pro-abortion record, and it showed in a recent debate. While Baldwin stumbled over a question about her stance on late-term abortion, Vukmir – a former NICU nurse – boldly called Baldwin out on her extremism. Vukmir has what it takes to stand up for Wisconsinites.

A bona fide pro-life hero, Congressman Marsha Blackburn, is running in Tennessee. While Blackburn led the charge in the U.S. House to investigate Planned Parenthood, America’s largest abortion business, for its role in the harvest and sale of baby body parts, her opponent Phil Bredesen is “not the least bit interested” in stopping the flow of half a billion dollars a year in taxpayer funds to the abortion giant. Talk about out of touch!

In Minnesota, pro-life Karin Housley faces former Planned Parenthood executive Tina Smith. Planned Parenthood not only ends the lives of unborn children, an investigation by Live Action shows they’ve also systematically covered up sexual abuse and human trafficking. Ousting Al Franken for his treatment of women, only to replace him with a lobbyist for this corrupt organization would truly defy common sense.

Senator Cindy Hyde-Smith is one of the newest members of the U.S. Senate and is doing an outstanding job representing Mississippi, working diligently to stop taxpayer funding of the abortion industry and to protect babies born alive in failed abortions. Appointed to fill a suddenly vacant seat, she greatly deserves Mississippians’ votes.

Martha McSally of Arizona fought to keep Americans safe in the Air Force, and she’ll fight for her constituents in the U.S. Senate. She’s a top target of radical pro-abortion groups who back her opponent, but as the first female combat pilot in our military, McSally will hardly be intimidated by the complaints of the abortion lobby.

Last but certainly not least, Senator Deb Fischer is running for re-election in Nebraska. I’ve known Deb for years; she is an original member of Susan B. Anthony List’s National Pro-Life Women’s Caucus, a champion of common-sense policies that aid women and families, and a staunch ally of Nebraska taxpayers.

These six strong women running for U.S. Senate defy the mainstream media narrative that the radical, pro-abortion Left speaks for America. I urge readers to visit CommonSenseWomen.org to learn more about them, contribute to their victory fund, and then get to the polls and vote for common sense this November.