The Super Resources that Only Democrats Could Hate 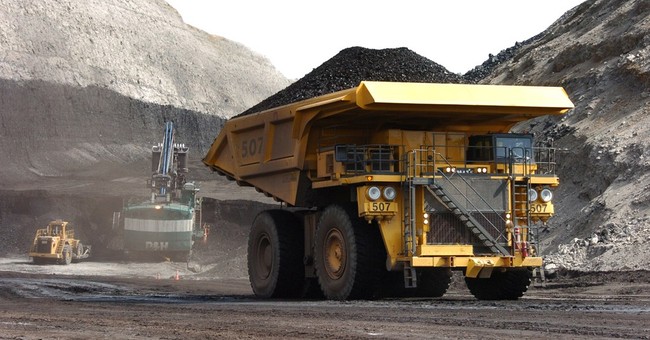 Energy is a super-resource. It is beneficial to several targeted economic problems and may even help some political conditions. The qualities of energy make it a special category of elements found in nature: a super-resource.

Berries, broccoli, and beans are all considered superfoods which are defined as a special category of foods found in nature; a food that is considered to be beneficial to your health and that may even help some medical conditions. They pack a lot of punch.

Oil, natural gas and coal, are all super-resources. They are found in nature. They pack a lot of punch. They are beneficial to the economy in that they create jobs, increase revenues, and help balance the trade deficit.

Here are three examples of how these super-resources benefit the economy.

The Keystone pipeline would create thousands of jobs—primarily union jobs in construction (one of the hardest hit industries in the economic recession) and increased service employment in supporting communities. These jobs and the various land-use payments will provide additional revenues to the federal coffers. As some of the oil brought into the US will be refined and exported, it will help balance the trade deficit.

America’s abundance of natural gas—due to the combined techniques of horizontal drilling and hydraulic fracturing, and new technologies—means that there is more natural gas available than can be used within our borders. Many countries, such as Japan (with whom we run a $6 billion trade deficit), want our excess, but to ship it, the natural gas must be liquefied—which requires special liquefied natural gas (LNG) terminals. Reports indicate that LNG exports would “result in the creation of over 100,000 direct, indirect, and economy wide jobs and have an immediate economic impact resulting in $3.6 to $5.2 billion in potential annual revenues.”

The US contains one-fourth of the world’s coal reserves and the Powder River Basin (PRB) found in Wyoming and Montana accounts for about 40 percent of US coal reserves. The 13 active coal mines in the Wyoming portion of the PRB employ more than 6800 workers. US exports of coal to European and Asian markets are increasing. Exports could really take off if West coast ports were allowed to expand deep-water loading capacity—which would create new construction jobs.

Energy is clearly “beneficial to the economy.” Countries with super-resources have healthier economies, like superfoods help human health. But to effectively draw the “superfood” comparison, energy must “even help some” political “conditions”—and that “political condition” is immigration.

Mexico has been in the news lately—specifically for the energy reforms President Enrique Peña Nieto has proposed. Mexico has 115 billion barrels of oil equivalent—some of the world’s biggest remaining untapped oil reserves, yet production has declined by nearly 25 percent over the past decade. Mexico is now a natural gas and gasoline importer. The Financial Times reports: “experts predict it will become a net oil importer within a decade unless something is done.”

Pemex, the national oil company, with $60 billion in debt, is plagued by mismanagement and political meddling. “Because,” as reported in the Financial Times, “profits are siphoned towards government spending, not enough money has been ploughed back into exploration.” Or, as energy minister Pedro Joaquin Coldwell observed: “investment spending at Pemex is often, well, suboptimal.”

The Economist explains that Mexico is running out of easy-to-access oil and, on its own, is unable “to take advantage of the shale and deepwater deposits that have proved so bounteous across the border in the United States. So it needs partners.” David Gee, US energy practice leader of the Boston Consulting Group, according to CNBC, said: “Accessing those reserves requires intensive capital and specialized skills.”

President Peña Nieto understands the country’s need for modernization and that bringing Mexico’s wealth to the surface will take “the right business model and the right technology.”

Peña Nieto’s proposed energy reforms would end Pemex’s monopoly by allowing it to partner with foreign companies through profit-sharing contracts that would provide exploration and development opportunities. He hopes to “attract the foreign capital and expertise Mexico needs.”

Emilio Lozoya, the Pemex chief executive tasked with selling Mexico’s energy reform to foreign investors, hopes to increase oil investment by $10 billion a year. With the familiar geology and operating conditions found in Mexico—versus the politically unstable regions of Africa or the Middle East or the difficulty of operating in the Arctic—and the lure of access to previously unreachable natural resources, attracting foreign oil and oil-field service companies with the needed financial muscle and technical skills should be easy.

However, potential investors are skeptical. In 1938, under then-President Lazaro Cardenas, Mexico nationalized its oil industry—expropriating fields from US and British companies. In response to the proposed reforms, Chevron spokesman Kent Robertson said: “As with all the investment opportunities we consider around the world, factors such as economic returns, stability of the investment climate and sanctity of contract are central to any decisions we make.” While the terms being offered are not what the industry prefers—profit-sharing rather, than production-sharing—they should, if passed as planned, provide legal certainty.

“Even though the terms are not ideal,” Ayman Asfari, chief executive of the oil service company Petrofac, which is active in Mexico, believes they should not prove to be a deterrent. “Mexico’s reserve potential, particularly for deepwater and shale gas, is so great that it will definitely be attractive to the majors.”

Mexico holds the other half of two of America’s biggest discoveries. Chevron’s Lower Tertiary extends into Mexican waters and Texas’s Eagle Ford shale doesn’t stop at the Rio Grande. In just one year, 2012, the US issued more than 9100 permits, to 170 companies, to drill wells. Mexico has only drilled three shale gas wells and has not tapped the deep waters on its side of the Gulf of Mexico. John Padilla, managing director of the energy-consulting firm IPD Latin America, said “It’s probably the largest virgin untapped play that's out there.”

Clearly, the super-resource will be beneficial to Mexico’s economy. The Economist calls Peña Nieto’s intentions “nakedly economic.” Peña Nieto believes: “This profound reform can lift the standard of living for all Mexicans.” But, how will it help the US political condition known as immigration?

If Peña Nieto can get his reforms through, despite the need to change the constitution and the opposition from those who believe any move toward privatizing petroleum “betrays the country,” he will create, according Pemex chief executive Lozoya, 500,000 jobs by 2018 and 2.5 million by 2025. Mexico will be booming. As has happened in North Dakota, people will be moving to Mexico for the jobs. Instead of Mexicans sneaking across the US border for low-paying jobs in America, they’ll be lining up for the good-paying jobs in Mexico’s oil fields.

Peña Nieto’s reforms are expected to pass, but experts predict it will be several years before they will boost oil-and-gas production. With immigration stalled in Congress, Peña Nieto’s energy reforms could have millions of jobs available in its oil fields before America passes immigration reform.

In a review of Mexico’s proposed energy reforms, Carl Meacham, director of the Americas Program at the Center for Strategic and International Studies, concludes: “If the Mexican Congress passes the constitutional amendments, Mexico could help itself and North America achieve their full potential, positioning the region as a global driving force of a revolutionary and revolutionizing energy industry.” Only a super-resource could do all that.