The Death of the Living Constitution 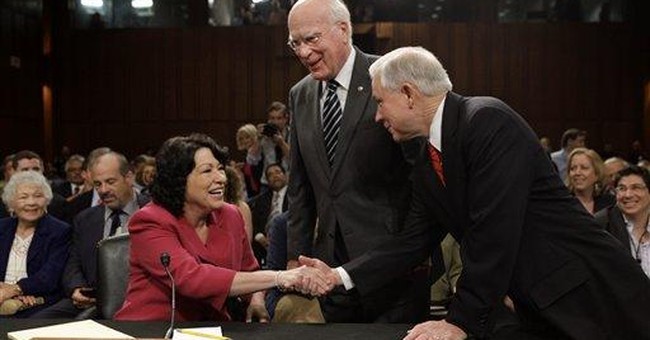 In The Gay Science, German philosopher Friedrich Nietzsche made a famous declaration that reflected a major shift in philosophical thinking. "Where has God gone?" asked a man in his book. "I shall tell you. We have killed him - you and I. We are his murderers,” came the response from a group of atheists.

While that statement, known as the “death of god,” is just that: a statement, and stands in total contrast to the living God we see working daily in our lives, it reflected a growing philosophical view that had very real consequences. For example, in The Rise and Fall of the Third Reich, journalist William Shirer writes that, "Hitler often visited the Nietzsche museum in Weimar and published his veneration for the philosopher by posing for photographs of himself staring in rapture at the bust of the great man."

The nomination of Judge Sonia Sotomayor to the Supreme Court presents to us a major shift in judicial philosophy: The Death of the Living Constitution. But unlike Nietzsche’s declaration, this shift will have a major positive impact for us as a society.

For many years a philosophical debate on the proper role of a judge has been raging in our country. Conservatives believe the Constitution should be understood as written and that it specifically provides for a proper way of a amending it. Many liberals, on the other hand, believe the Constitution is a “living, breathing” document that changes with the times, and that judges are the ones to decide what those changes are.

There is no question on which side the majority of Americans are. Rasmussen polls consistently show that about 63 percent of all voters say justices should base their rulings on what is written in the Constitution. Compared to only 30 percent who say they should be guided by perceptions of fairness and justice.

President Obama agrees with that 30 percent. He has said the law can only get you so far and then a judge must determine cases “on the basis of one’s deepest values, one’s core concerns, one’s broader perspectives on how the world works, and the depth and breadth of one’s empathy.” Based on that standard, President Obama selected what seemed like the perfect candidate for the Supreme Court in Judge Sonia Sotomayor.

Before being nominated, Judge Sotomayor had expressed a similar judicial philosophy. She argued that her background, gender and race play and should play a major role in her judicial decisions. Most people know about her “wise Latina” comments and that she believed judges make policy at the appellate level. There was no question she fit perfectly in President Obama’s mold.

But Judge Sotomayor appears to have pulled a fast one on him. She experienced a convenient “conversion” at the hearings, now that the Supreme Court is in her sights, and now she really knows what the proper role of a judge is. She was able to fool some people, but in turn she demonstrated that the “living constitution” and the President’s “empathy” standard are unacceptable for a Supreme Court Justice. The following exchanges illustrate:

Sen. John Cornyn (R-Texas): Is there a difference, in your mind, between making the law and interpreting the law? Or is this a distinction without a difference?

Sotomayor: Oh, no. It's a very important distinction. Laws are written by Congress... The courts, when they're interpreting, always have to start with what does the Constitution say, what is [sic] the words of the Constitution…

Sen. Jon Kyl (R-Arizona): Let me ask you about what the president said -- and I talked about it in my opening statement -- whether you agree with him. He used two different analogies. He talked once about the 25 miles -- the first 25 miles of a 26-mile marathon. And then he also said, in 95 percent of the cases, the law will give you the answer, and the last 5 percent legal process will not lead you to the rule of decision. The critical ingredient in those cases is supplied by what is in the judge's heart. Do you agree with him that the law only takes you the first 25 miles of the marathon and that that last mile has to be decided by what's in the judge's heart?

Sotomayor: No, sir. That's -- I don't -- I wouldn't approach the issue of judging in the way the president does. He has to explain what he meant by judging. I can only explain what I think judges should do, which is judges can't rely on what's in their heart. They don't determine the law. Congress makes the laws. The job of a judge is to apply the law. And so it's not the heart that compels conclusions in cases. It's the law. The judge applies the law to the facts before that judge…

Kyl: Have you always been able to have a legal basis for the decisions that you have rendered and not have to rely upon some extra-legal concept, such as empathy or some other concept other than a legal interpretation or precedent?

For years we have fought those who argued that whether to view the Constitution as a “living” document or to take it as written were basically two acceptable alternatives for a judge to choose from; both within the “mainstream.” And we are finally winning. The debate on the nomination of Judge Sotomayor established a judicial norm where the “living Constitution,” along with the President’s new take on it (his “empathy” standard), and even Judge Sotomayor’s own views, before her “conversion” at the hearings, fall squarely outside that norm –outside the mainstream.

Much of the credit has to go to Senator Jeff Session (R-Alabama) who, since day one, led the charge to engage in a great debate about the proper role of a judge. His opening remarks set the tone for what has to be seen as a historic moment for the future of judicial nominations:

"[T]his hearing is important because I believe our legal system is at a dangerous crossroads. Down one path is the traditional American legal system, so admired around the world, where judges impartially apply the law to the facts without regard to their own personal views. This is the compassionate system because this is the fair system.

In the American legal system, courts do not make the law or set policy, because allowing unelected officials to make laws would strike at the heart of our democracy....

I will not vote for—no senator should vote for—an individual nominated by any President who believes it is acceptable for a judge to allow their own personal background, gender, prejudices, or sympathies to sway their decision in favor of, or against, parties before the court."

In my view, such a philosophy is disqualifying.

Such an approach to judging means that the umpire calling the game is not neutral, but instead feels empowered to favor one team over the other.

Call it empathy, call it prejudice, or call it sympathy, but whatever it is, it is not law.

Although the imminent confirmation of Judge Sotomayor cannot be encouraging to anyone interested in a fair impartial judiciary, winning the philosophical debate will have very real positive consequences in protecting our liberties and the future of the judicial confirmation process. It will definitely have a profound impact on President Obama’s next Supreme Court nominee. And hopefully it will have a profound impact on the next generation of judges who will learn from this experience what the proper role of a judge is.

When the next generation asks, “Where has the ‘living constitution’ gone?” May we proudly say, “We have killed it - you and I. And we are freer because of it.”