Marina Medvin
|
Posted: Feb 12, 2020 2:05 PM
Share   Tweet
The opinions expressed by columnists are their own and do not necessarily represent the views of Townhall.com. 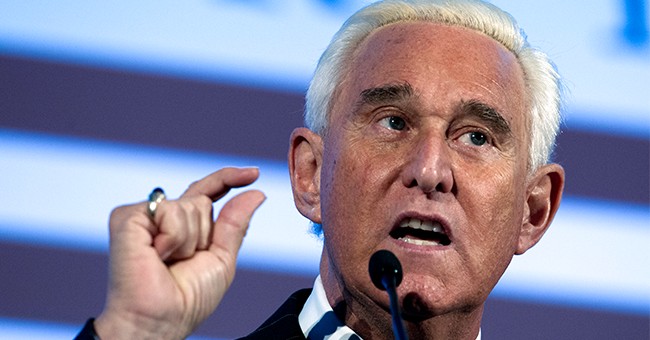 A day after a nine-year sentencing recommendation for the elderly Roger Stone was filed, Senior DOJ officials immediately distanced themselves from the recommendation. They told CBS News that the prison time recommendation was "extreme, excessive, grossly disproportionate to offenses," and that this is not what was briefed to the DOJ by the assigned prosecutors. Hours later, all four lawyers assigned to the case withdrew, with one, Jonathan Kravis, resigning from the DOJ entirely.

This is unusual, to say the least. Top to bottom, from the start of the case to this shocking end, has been unprecedented. What is going on?

President Trump asked: "Who are the four prosecutors (Mueller people?) who cut and ran after being exposed for recommending a ridiculous nine-year prison sentence to a man that got caught up in an investigation that was illegal, the Mueller Scam, and shouldn't ever even have started?"

I went to federal trial attorney Jesse Binnall for some answers. Binnall defends high-profile clients against political witch-hunts and has defended cases brought by Jonathan Kravis in the past. Currently, Binnall is defending Michael Flynn alongside Sidney Powell.

In your professional opinion, was anything unusual about the Roger Stone case?

"Roger Stone wouldn't ever have been a target of prosecution had he not been a Trump supporter. The President was absolutely right; the political underpinnings of this case are very disturbing. The events of the past few days show just how unusual this case really is."

Can you explain what exactly was unusual in recent days, and why?

"These four prosecutors filed a brief making a sentencing recommendation without getting approval from the chain of command. That is extraordinarily unusual in the DOJ. In fact, I can say it's unheard of at the DOJ; certainly, I've never heard of it. In practice, DOJ lawyers almost always get approval for everything they do."

Then, all four prosecutors on this case withdrew in succession, with one, Kravis, resigning from the DOJ entirely. This is unheard of. Why do you think they did it? Do you believe they planned and colluded?

"I think they knew exactly what was going to happen when they filed that sentencing recommendation, expecting they will be reined in for doing so. They could then play the role of martyrs by resigning from the case, with one of them resigning entirely from his job.

One of the most serious powers of a prosecutor is asking to deprive a defendant of freedom, requesting jail time. I think this [nine-year sentence] was an abuse of their power as prosecutors, to make a recommendation like this without making a departmental approval.

They knew leftist media would celebrate their disobedience and abuse of power. Leftist media has a history of fawning over people who martyr themselves for left-wing causes, just like Sally Yates. I think they wanted to leave the Roger Stone case with a bang.

Or, they did it because they were going rogue, and they didn't care what their supervisors thought. Perhaps because they don't like U.S. Attorney Shea. To them, this case is political, and it's personal. I think they suffer from Trump Derangement Syndrome. TDS is a very serious condition!"

Jonathan Kravis appears to have been leading the Roger Stone prosecution and abruptly resigned from the DOJ. You have tried cases against him in the past. Did anything unusual happen in those cases?

"I was opposite Jonathan Kravis on The Ron Paul Three case, which was the prosecution of three Ron Paul campaign aids in Iowa. It was a politically-driven prosecution targeting three Republican activists.

First, Kravis and his partner violated an immunity agreement -a proffer agreement- they signed with a co-defendant in that case, and the judge dismissed the codefendant's case based on prosecutorial misconduct.

Then, Kravis hid exculpatory and impeachment information from my client, Dimitri Kesari.

Kravis' team later violated my client's attorney-client confidentiality, obtaining text message communications between Kessari and me, shockingly producing the conversations to another co-defendant in the case!"

Are there any similarities between the Roger Stone case and The Ron Paul Three case?

"Jonathan Kravis did the same thing to my client Kesari that he did to Roger Stone. Remember how they raided the 68-year-old's home to arrest him? They did the same thing to Kesari. Feds busted into his house at 6 in the morning and dragged his 15-year-old daughter out on the side of a busy road, in her underwear. For context, this case was about a failure to report a campaign expenditure on an FEC form."

This type of raid, for noncompliance with a federal form, is an absolutely absurd abuse of government power.

What is your take on Jonathan Kravis' intentions?

"Kravis is very calculating. He is a former Obama White House lawyer and I think he came to the DOJ with a political agenda. In fact, I think he’s an angry Democrat who can’t stop abusing his power as a prosecutor. It’s good that he has left government"

Did Kravis achieve his agenda?

"I think Kravis is upset that the President of the United States and the Attorney General are putting limits on his political prosecutions."

Are the President and AG Barr within their power to do so?

"Absolutely, that is their constitutional duty."

Can AG Barr punish Kravis for abuse of power?

"I think he should be investigated under 18 USC 242 for deprivation of constitutional rights under the color of the law. Kravis has violated his obligations under Brady, he violated a defendant's proffer agreement, a violation of a defendant's 5th Amendment rights, and that's just what I know about. I think the DOJ should look into all the cases that Kravis has been a part of.

Someone needs to put a stop to prosecutorial misconduct, and this is just the President to do it."

Indeed, in response to questions raised by the public as to the seemingly-underhanded prosecution of Roger Stone and Michael Flynn, President Trump tweeted the question, "Prosecutorial Misconduct?"

The real question remaining is what will President Trump do about it?

In the meantime, Binnall opines that Kravis will probably be going into the private sector, where Kravis is likely to be making three times as much money as before.

The legal analysis and opinions expressed to Townhall by interviewed individuals do not represent the views of the writer, editors, Salem Media or Townhall.