Marina Medvin
|
Posted: Jun 13, 2019 12:01 AM
Share   Tweet
The opinions expressed by columnists are their own and do not necessarily represent the views of Townhall.com. 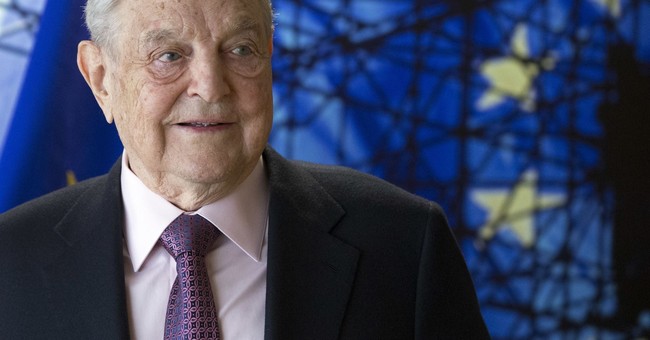 George Soros has won another and another election. This time, in the DC suburbs of Virginia — Arlington and Fairfax. Soros funneled over a million dollars into the local Democrat primaries for prosecutor. (Compare that to the measly thousands that the local candidates usually raise.)

The incumbent Democrats with prosecutorial experience weren’t left-enough for the Marxist worshipper, so Soros sought to replace them with ideologues. Soros backed the “progressive” candidates who publicly echoed his neoliberal ideology, even though they lacked local prosecutorial experience, something that local voters have consistently favored when electing their representative prosecutors. But who cares about what the local residents want when George Soros is puppeteering.

The Soros candidates advocated for ending cash bail, ceasing prosecution of marijuana possession cases, and taking the threat of death penalty off the table in capital cases. Both Soros candidates also supported returning voting rights to more than 200,000 convicted felons in Virginia, the Washington Post reported. These positions, if backed by local prosecutorial experience, would have probably been enough to prevail with the liberal majority jurisdictions without any help from out-of-state money. But locals want to see experience, their voting record proves that, and the challengers didn’t have any to show. Instead, the neoleftist challengers had Soros’ cash.

“[Soros’ candidates] have been able to send more mailers and buy TV commercials in the expensive Washington-area market, which is not something that’s typical in local races for prosecutor in Virginia,” the Washington Post reported. “She’s trying to buy the election,” the Arlington incumbent previously said of her Soros-backed opponent. The incumbent was right. Soros succeeded.

The campaign contribution numbers expose how Soros won the elections.

PAC contributions for the Soros candidate in Fairfax looked eerily similar: $459,210 from Justice & Public Safety PAC, $32,341 from New Va Majority, and $10,000 from Real Justice PAC. Again, the Democrat incumbent only had individual contributions.

The math adds up to locals favoring the incumbent Democrats and out-of-state PACs favoring the neoliberal challengers. So who funds these PACs? According to The Washington Post, George Soros funded Justice and Public Safety PAC. According to Virginia records, Soros’ Justice and Public Safety PAC then funded New Va Majority. Both of these PACs are the top two donors to the two challengers in the prosecutor primaries. The third PAC was funded by Cari Tuna, wife of Facebook co-founder Dustin Moskovitz. Tuna and Moskovitz reside in California, and Soros in New York. None of these wealthy election meddlers live in Virginia.

The out-of-state cash support was unprecedented in the Northern Virginia communities. One of the incumbent Democrats called on the practice to be banned. “Over 72% of my opponent’s fundraising has come from a single Super PAC,” the Democrat incumbent said in a forum a few weeks back. “In most states, this type of direct coordination between a campaign and a Super PAC would be illegal, and it should be in Virginia as well … Less than 10 percent of his financial support has come from within Fairfax County.”

Political law practitioner and campaign finance expert Dan Backer disagreed with the incumbent’s assessment of out-of-state contribution criminalization. “It is unconstitutional to prohibit money from out of state donors — what the Democrat incumbent stated is factually wrong,” Backer told TownHall. Backer’s assessment of the law is supported by a recent decision out of the United States District Court in South Dakota, which held that a state’s ban of out-of-state contributions is a violation of the First Amendment and the Commerce Clause. Soros’ election meddling was thus legal and will continue to remain legal.

Soros didn’t limit his meddling to Virginia; he has been doing this throughout the United States. Just a few days ago, Tucker Carlson accused George Soros of “hijacking” a local Philadelphia election for prosecutor and for “remaking this country” with his campaign contributions. Soros carried out the Philadelphia interference with the same modus operandi as in Northern Virginia. Same was seen in California and Texas. This has been happening in front of our eyes throughout the United States for at least three years.

The question still remains: why is George Soros meddling in local prosecutorial elections in liberal-majority neighborhoods?

Arlington and Fairfax were already liberal-majority jurisdictions, with 77 percent and 65 percent voting for Hillary over Trump in 2016, respectively. Philadelphia, for comparison, was even more extreme, with 82 percent voting for Hillary. So what piqued Soros’ interest? I believe he simply saw these jurisdictions as opportunities to easily inject his brand of extreme neoleftism, and prosecutor races, which are normally ignored by megadonors, was the easiest point of infiltration.

Consider the example of a concurrent prosecutorial race in Northern Virginia’s Prince William County. Soros stayed out. While Prince William also voted for Hillary over Trump in 2016, their margin was much lower, at 57 percent. The indication is that the Prince William locals may not be as left-leaning as those residing in Arlington and Fairfax. Neoliberal infiltration would have been more difficult.

The result of hand-picking prosecutors is the most direct way of effectuating change. Prosecutors choose who to prosecute, which crimes to prosecute. They train local law enforcement. Soros, at a minimum, believes this is the key to effecting the BLM movement’s politics, an anti-cop movement which has received millions in donations from the socialist billionaire. Soros probably sees many “progressive change” opportunities like this with his hand-picked crop of social justice proponents, soon to become county prosecutors.

The revelation that locals are losing control of their county elections will hopefully be a wake-up call. Alarm of George Soros victories in Virginia and Pennsylvania should ring loud throughout the United States. Paul Revere’s “the British are coming” was once a sound alarm. May we heed the warning that George Soros is coming, loud and clear.