Net Neutrality is a Fancy Term for Internet Socialism

Marina Medvin
|
Posted: May 18, 2018 12:01 AM
Share   Tweet
The opinions expressed by columnists are their own and do not necessarily represent the views of Townhall.com. 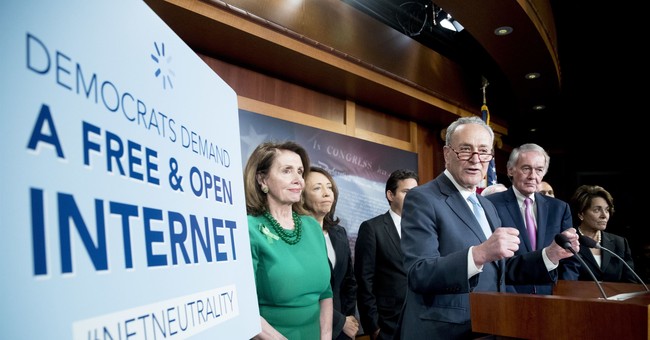 Don’t be fooled by the terminology. Net neutrality isn’t a tech term that will be hard for you to comprehend. You will get it in an instant, I promise. It’s the same old socialism, just rebranded to make it tech-trendy.

There’s nothing neutral about net neutrality. It simply means everyone pays more, for things they need and don’t need, all indiscriminately, like taxes. Net neutrality is just internet socialism.

People who originally fought for net neutrality were afraid of “unregulated capitalism.” Red flags all over the place.

Why else did you think Democrats wanted it so badly?

Senate Democrats just voted to keep their collectivist legacy. Bernie Sanders, Elizabeth Warren; all 49 of them voted in favor of keeping net neutrality regulations. Because providers can otherwise dangerously “discriminate” if people pay more or less. “Discriminate” means apportion services based on how much providers are paid. Pay more, get more is terrible discrimination, according to the Democrats.

Democrat thought process: How dare you ask for the right to pay for better service! How dare you ask to pay less to save some money and not subsidize your neighbor’s internet! Everyone pays the same and gets the same. Government tells you what you need and what you pay.

Democrats argued Wednesday that if we repeal the regulations, the internet as we know it will come to end. Net neutrality didn’t even exist until three years ago when the Democrats passed the rules through the Democrat-controlled FCC. Was anyone feeling that their internet opportunities were hindered before 2015? Anyone? Anyone? Bueller?

Maybe if you couldn’t afford the internet. But you’re not entitled to internet. Just as with everything else, you need to earn your money and pay for it if it’s worth anything to you. Same as any other service.

Democrats disagree with me, they believe everyone is entitled to internet. They used key socialist terminology Wednesday when describing net neutrality: “public good.” That’s the socialist term for entitled.

The internet is not a commune. The internet is a marketplace. I like to keep my markets free, competitive, innovative and profitable. Socialism inhibits all of that.