Schools Are Teaching Kids to Use Their Body, Not Their Mind, To Affect Politics

Marina Medvin
|
Posted: Apr 25, 2018 12:01 AM
Share   Tweet
The opinions expressed by columnists are their own and do not necessarily represent the views of Townhall.com. 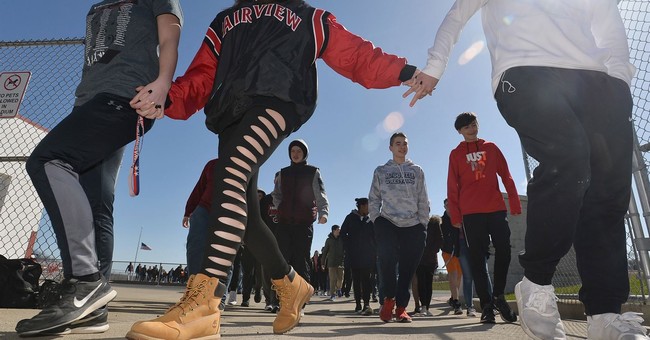 Teachers and school administrators have been supporting and encouraging student walkouts in protest of “gun violence.”

I: “What are you protesting?”

I: “Ok. No one disagrees with you. ‘Gun violence,’ an ambiguous term by which you mean gun crimes, is already prohibited by every state of these United States as either murder or brandishing or other type of criminal assault. Go back to class.”

What they are actually attempting to protest is the ability of anyone to possess a gun. Former Supreme Court Justice Stevens laid out a logical explanation for what the politics behind these school walkouts are really attempting to achieve: “a constitutional amendment to get rid of the Second Amendment.”

But these kids are not being taught to understand, rationalize and articulate the problem. These kids are taught that ambiguous, nonsensical terms like “gun violence” are fine to use, instead of particularizing the problem and articulating the solution, like Justice Stevens had to point out. These kids are being taught that using their bodies in protest, as opposed to using their minds in intellectual discourse, is smarter. Teachers are encouraging kids to walk out of class in lieu of studying the psychological causes of the shootings, our legal processes, and the American government.

It is worrisome to me as an American to see the political mockery that these students, encouraged by teachers and school administrators, have made of the tragic deaths of our innocent school kids. And the administrators’ role in this is significant: students are not being encouraged to think as individuals and to patiently debate without a physical component. Students are instead being taught that the physical component together with groupthink is the answer to their problems. This significantly diminishes their ability to rationalize in their own self interest. This significantly diminishes their ability to think objectively and to deeply understand the solutions they are supporting.

Go back to Justice Stevens’s proposition, for instance. The gun-ban position is very appealing to these kids, because is sounds so simple on its face - “No gun, no shoot! Problem solved!”

In the real world, humans do not always follow the rules. This is an inalienable attribute of humanity. People will break the rules, bad people will exist, and bad things will happen. There is nothing that we can do to stop them. The human race has not yet been able to uncover the secret to ridding the world of murder, larceny, and rape. Maybe because those crimes are not always cut and dry (and I can tell you from a criminal defense attorney’s perspective that in fact most of these allegations are not ever so simple as acts that are right or wrong; that is why we have a jury system and a 12-person jury must take time to deliberate to reach a unanimous verdict).

There is no legislation that will prevent the inevitability of human nature.

Legislation of bad behavior does not eradicate the bad behavior. Legislation of gun possession will only eliminate possession rights for the law-abiding individuals who possessed weapons for personal security. For it is the law-abiding who abide by the law. And the law abiding are not the ones who you are worried about. More importantly to consider in this balance is that law-abiding Americans have used their firearms in self-defense 3.6 times as often as criminals have used them for “gun violence,” according to studies conducted by our the CDC. Moreover, many states already have increased penalties for committing crimes with a gun. These increased penalties have not stopped gun-related crimes.

We can safely assume that if someone has decided to break the law by intending to commit mass murder, then gun possession deterrence will not stop them. So what does punishing the law-abiding via gun prohibition actually achieve in the quest to stop school shootings?

And if we are to protect our schoolchildren against “gun violence,” then how do we do that disarmed? Instead, the only proactive rational response to defend against “gun violence” in schools can be to increase school security protocols (restricted access, cameras, ALICE drills, etc) and to add armed and trained guards. To guard our schools as preciously as we guard our banks, police departments and courthouses. Many schools agree and have implemented armed security measures.

So why are students not demanding armed guards and physical protection? After all, a law does not physically manifest itself and magically appear between a shooter and his victim to prevent the shooter from killing his victim. A law does not instantaneously defend - it simply creates deterrence. And we know the deference does not stop crime. Why are kids not demanding immediate protection, physical protection from an expectedly non-law-abiding shooter? Because they are being publicly encouraged not to think think via rational self-interest, but to support a groupthink cause.

As we know, some intelligent individuals disagree with this. Justice Stevens, for one, disagrees and articulates why. This is all natural and part of expected political discourse. But I am not seeing respectful discourse from most students who disagree.

Other than Donald Trump’s listening session, we are not hearing much of an intelligent discussion from the students. Instead we are seeking physical protests and their kid leader regurgitating Twitter politics.

There are some important exceptions to this generality, such as Kyle Kashuv, a free-thinker student who is knowledgeable about our rule of law and has found an intellectual way to discuss the problems. ”I truly believe this livestream -- learning about our Constitution and finding ways to save lives without infringing on our Constitution -- is the best way to sanctify the day and remember those who were lost in (the Parkland shooting) and in Columbine," Kashuv told CNN. "I created this event to do just that.” He does not have much public support from schools and school administrators.

Without the teachers doing their jobs, even with strong at-home parental intervention attempts, individual thinkers like Kyle Kashuv will become more and more rare. As parents we need to strongly revaluate the roles of our public schools, private schools, and home schooling.