Vallely: Egypt "so upset with the American government supporting the Muslim Brotherhood and al-Qaeda" 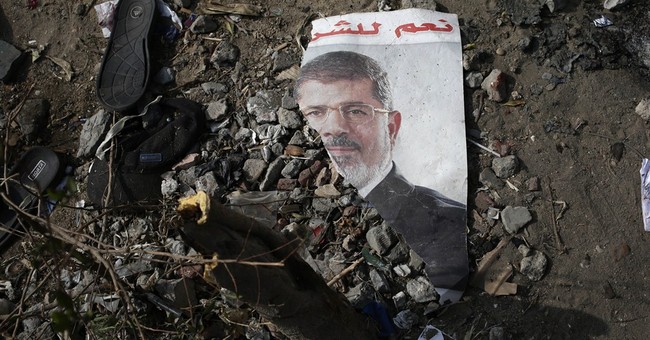 A Line of Sight contributing editor, Major General Paul E. Vallely (US Army Ret.) just returned from a fact finding mission to Egypt. "The bottom line is they are so upset with the American government supporting the Muslim Brotherhood and al-Qaeda over there," Vallely told Steve Malzberg in the Newxmax.com interview linked below.

"They can't believe after 45 years of a good alliance that we would stop their modernization program for their military that is absolutely critical in the Sinai now protecting the Suez Canal," Vallely says. "So there's a lot ... there that has not been understood or not properly publicized in the western press."

Months ago the Egyptian military ousted the Muslim Brotherhood backed president Mohammed Morsi, and arrested him and other MB members of his administration.

Within days after Morsi was installed in July 2012, Secretary of State Hillary Clinton sat down with Morsi for a highly publicized meeting and made it clear that the United States "supports the full transition to civilian rule" feigned by Morsi and his MB allies. Instead, Morsi quickly tossed aside the new constitution, courts, and democratic principles and became a far too familiar strong arm Islamic despot.

Vallely, who met with government officials and business leaders, believes the Muslim Brotherhood will be excluded from the new government and constitution because it would have to be accepted as a political party.