The Divorce Will Be Televised 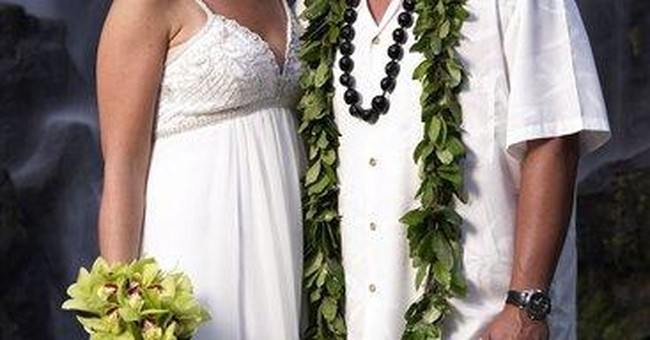 America's most televised parents of multiples made it official: They are splitting up. Kate minus Jon makes nine.

Yes, the children will suffer. But no doubt it will be good for ratings.

Well, there are worse tragedies than divorce, bigger problems in the world than the things that led Jon and Kate to break up their own family, as the headlines remind us. Even as Kate and Jon called it quits, a young Iranian woman named Neda captured the fickle attention of the world for her simple and defiant act of courage. Some things are worth dying for.

This weekend, as Jon and Kate made their big announcement, I attended the 50th wedding anniversary of a close family member, who had married in India. The wedding was arranged. One of the children, making the toast, asked:

"How does a marriage survive 50 years? Here is what I have learned: Meet your wife on your wedding day. Surround yourself with family and friends. Wait."

I understood what he meant. I'm asked by the young, "How do you avoid divorce?" The first and most important answer is: Don't go down to the courthouse. If neither of you does, there won't be any divorce.

Oh, they follow up, "What we really mean is 'How do we create a happy marriage?'" That's a noble goal, but really a different question.

No one can blame Kate and Jon personally. After all, we live in a divorce culture -- only a slight majority of marriages make it "till death do us part." And 40 percent of American babies are now born to women (and men) who dispense with marriage altogether. Well, that is one way to avoid the trauma of divorce.

A wedding is the weak link in the family system -- the extraordinary attempt to make biological strangers into closest kin. For me ,every divorce -- not just Jon and Kate's -- prompts questions:

Is being a wife merely a role I've chosen, a thing I enact so long as it benefits me? Or can I do something else with marriage -- import another human being into the essence of my identity -- make being a wife something I am, like being a mother, not merely something I do? Is it possible to really become one flesh?

More questions: Is this kind of irrevocable prime commitment a good thing? Or is it an unreasonable imposition on our human freedom?

Marshall McLuhan was wrong: The revolution will be twittered; it is the divorce that will be televised.