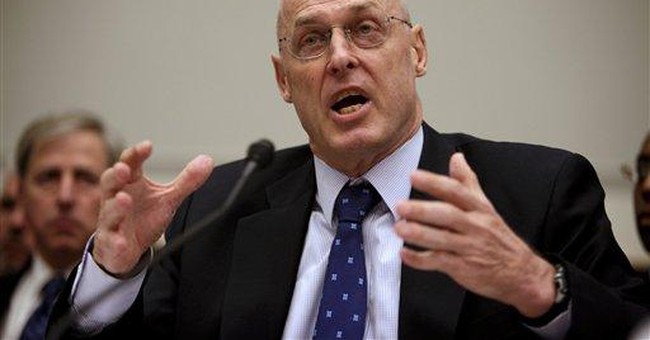 Treasury Secretary Henry Paulson looks like an investment banker. He's a big guy, whose large hands, broad shoulders and balding head signal he's got the drive, the cojones, to be an alpha male in the once-intensely competitive world of big money. The owlishly round glasses suggest intellect, and overall, his combination of physicality and IQ remind one of the way Wall Street had become a kind of Roman Circus of nerd gladiators, transforming surging aggression into extraordinary material abundance.

Something else is increasingly obvious about Paulson: He doesn't have a clue.

Remember when he went before Congress and asked for a "really big number" to throw at the credit crisis? Neither Republicans nor Democrats wanted to be the ones to take the hit for Americans' plunging portfolios and accelerating sense of economic crisis. Maybe both parties had a lingering sense of responsibility, of the need to rise above partisanship to "do the right thing." So they gave to this man the power to pass our money around like popcorn or peanuts. And the stock markets plunged anyway.

Paulson has already abandoned the plan he laid out before Congress of using $700 billion of our money to buy out bad mortgage debt. His new idea is to buy bank stocks to inject more money into the system.

General Motors once had a plan too: sell enough good cars to make a profit. General Motors' new plan is to use taxpayer dollars to keep the management team that sent GM to brink of bankruptcy firmly in control.

Bankruptcy of a big company is not the horrible thing it once was for the economy. Under Chapter 11, the courts supervise a new management team and restructure debt in a way that keeps the key wealth-producing asset -- a working corporation -- intact. That way creditors get paid and workers have jobs.

Avoiding bankruptcy is a way for the GM management team to keep their jobs and for labor unions to get taxpayer dollars to avoid facing economic realities, too. And, of course, this is just the beginning. Why automakers and not airlines? Why airlines and not appliances? More companies in trouble will be lining up with grave public arguments about how much better off we all will be when our money is in their pockets.

I remember vividly standing in the lobby of a local hospital, watching a few minutes of the bailout bill testimony on television. A woman in green scrubs -- a lab technician -- stopped with me to watch. I will never forget the sheer fury in her voice. "The bums," she muttered. "They take care of each other -- who's going to take care of us?"

In the atmosphere of crisis at the time, weeks before an election, perhaps the bailout vote can be forgiven. Perhaps.

But let us draw a line in the sand, here and now, to prevent the emergence of that horribly deformed system, crony capitalism.