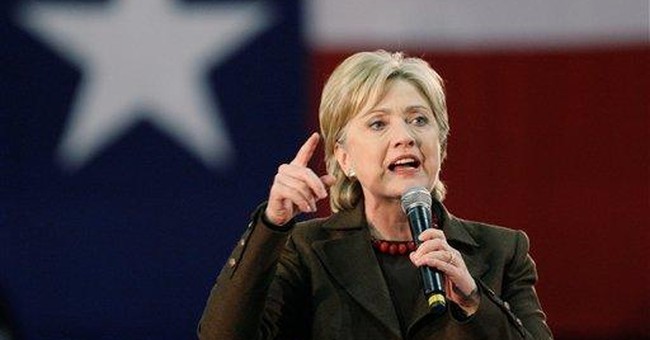 It was the best speech I've ever seen Hillary Clinton give.

Admittedly, she hasn't given much competition for the honor in the past, but in Ohio this week on election night, wearing Nancy-Reagan red and croaking like Carol Channing, Hillary managed to slam the ball out of the park anyway.

Hillary came out swinging by singing a new tune with a subtly embedded note of class warfare against the latte liberals who are (along with African-Americans) Obama's core constituency: "I get knocked down, but I get up again; you're never gonna keep me down."

Do you know that song?

Let Barack be the symbol of hope; Hillary this week transformed herself -- OK, improbably, but persuasively -- into a symbol of working-class toughness: "For everyone who's been counted out, but refused to be knocked out; for everyone who has stumbled and stood right back up; for everyone who works hard and never gives up -- this one is for you!"

She jabbed Obama again on his inexperience in a time of war. Rather, in a time of "two wars abroad," as Hillary put it, we need a president "tested and ready to be commander-in-chief on Day One." She promised to "end" the Iraq war but also to "win" that other war in Afghanistan -- a preview of general election themes designed to counter the GOP riff that Democrats are military defeatists.

"Of course we can ..." she said deftly if indirectly accusing Obama of offering low expectations, because we're Americans. "Yes, she will!" the well-prepped crowd chanted on cue.

After highlighting universal health care and economic issues, Hillary Clinton ended with a strong appeal to her other base -- gender. Hillary told of the mother of two small girls who sent her a check for $10 because she wanted to live in a world where those daughters could grow up to be anything they wanted. Hillary thanked her own mom, along with "the two most important people in my life, Bill and Chelsea."

But when the cameras panned back on the chanting, cheering crowd, Bill was nowhere in sight. But Chelsea and Hillary walked off-stage together, hand-in-hand.

Meanwhile in his nonvictory speech, Barack Obama tried doggedly to assume Hillary Clinton's old mantle of inevitability, focusing his fire on John McCain. "We are on our way to winning this nomination," he said, shrugging off defeats in Ohio, Texas and Rhode Island.

That tattered old mantle of inevitability doesn't look any better on him than it did on her.

The thing about the change vote is that it can be so fickle. Some of the same folks who didn't like the idea of anointing Hillary the nominee, aren't going to care that much for Barack's effort to crown himself king of the hill while pushing Hillary down the slope in the process.

In Ohio, the class warfare appears to have worked well for Hillary: Barack Obama carried a majority of college graduates, but Hillary won two out of three votes from people who have only a high school diploma.

Bottom line: Barack Obama's attempt to create a new kind of politics, one where he's rubber and Hillary is glue, came to a screeching halt this week in Ohio and Texas.

And the lady came out looking like a chanp.