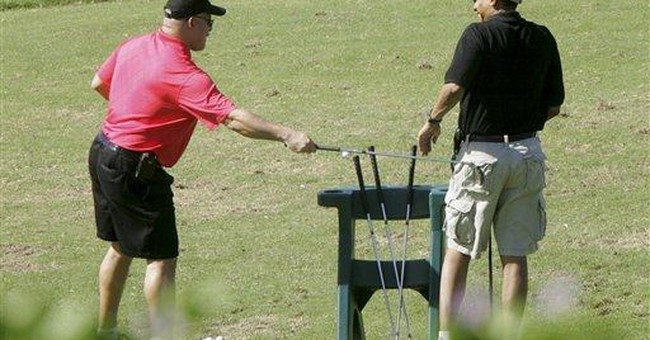 During the past year, Barack Obama has attended over 100 fundraisers. Even in a cynical, political town, such as Washington, DC Obama is racking up some staggering numbers, with time spent out of the office leading the list.

We are a generation that is used to executives who work outside of the office using air travel, telework, video conferencing, off-site, motivational conferences, international, simulcast product launches and a host of other 21st century management techniques to enhance a worker’s performance. But in this age of out of the office “productivity” activities, the average American is a mere piker compared to Barack Obama.

Peter Drucker, the management guru, once said that an effective CEO spends his time on an organization’s priorities because “time is the scarcest resource of the manager. If it is not managed, nothing else can be managed.“

Few executives seem to spend as much time out of office as of Barack Obama, but with the recent Chapter 11 filing for bankruptcy by Fuller Brush, thoughts about door-to-door traveling salesman immediately brought Barack Obama to mind.

Consider: Barack Obama has played over 90 rounds of golf in the past 36 months, attended over 250 fundraisers (100 of them in the past 12 months),and taken 78 days of vacation.

The Presidency of the United States is, arguably, the most difficult job on the planet. Certainly, Americans want a president that is refreshed, rested and capable of making sound judgment calls on the complex issues of the day, but Barack Obama has taken more than just a few days off; he’s taken them at great cost (literally) to the America people.

In the past year, Obama has done 20 fundraisers in California alone, traveling via Air Force One at a cost of approximately $180,000 per hour flying time. While several of the fundraisers occurred on the same trip, even the President of the United States can’t change the basic rules of physics, so, Obama, on Air Force One, will still require approximately 5 hours to fly to California and 5 hours to return from California.

A modest cost estimate might show that the10 hours of air time costs, alone, for a round-trip fundraiser in California is upward of $1.8 million. Then, consider the sheer number of trips made by Barack Obama, and Americans can see that Obama’s fundraisers in California cost the American taxpayer anywhere from $7 million dollars to $30million dollars –and that’s just the travel costs to California fundraising events. Imagine then, the cost of traveling to the other 80 fundraisers this past year.

If Americans consider the President’s time spent playing golf, those numbers are also startling. A round of golf, where the course has been cleared (because he’s the President and because of security) might be able to finish in about 3 hours. Of course, usually Obama golfs in the presence of hundreds of spectators such as occurred in Nantucket this past summer or in Hawaii over Christmas—so assume in those cases that the play is a bit slower. In general, though, the average time to play a round of golf is approximately 4.5 hours. If Americans do the math, then 90 rounds of golf, averaging 4.5 hours equals about 405 hours spent golfing and several dozens more hours traveling to golf courses to play..

Then there are Obama’s vacation days. (Now, hopefully some of the golfing occurred during Obama’s vacation days—though Obama often counts golf as a work day since he golfs with other politicos.) During the past three years, Obama has taken about 78 days of vacation. Most American workers work, on average, about 2000 hours annually. Obama’s 78 days of vacation equal approx. 1872 hours, so Obama has spent almost one year of his three years in office on vacation.

And, as always, there is the travel to get to the fundraising, golfing and vacationing.

What becomes clear is that Barack Obama is traveling around—a lot—selling himself, and trying to garner perks, privileges and a second term in office, but very little work that benefits the average American taxpayer seems to be getting done with our taxpayer dollars.

Consider: three years is 1096 days. Even by the most modest of estimates, with over 250 fundraiser, 90 rounds of golf and 78 vacation days, Obama has spent 40% of that time pleasure-seeking and fundraising.

Our nation is facing big problems, and we need folks willing to work now to solve these problems now. Delaying hard decisions is a sign of weakness and will surely lead to failure. So, it’s a bit scary when Drucker warns managers against ignoring fiscal priorities in favor of “a grandiose future”, as Obama seems to have done.

Golfing. Traveling. Fundraising. Vacation. Golfing, and then more fundraising. And, oh yes, vacation. Obama has made his priorities clear to Americans. Obama is all about re-election, pleasure and re-election—as long as it can continue to be done at the expense of the American taxpayer.