Blinded by the Light: Trump Got Down but He Never Got Tight

Loyd Pettegrew
|
Posted: Jan 28, 2022 12:01 AM
Share   Tweet
The opinions expressed by columnists are their own and do not necessarily represent the views of Townhall.com. 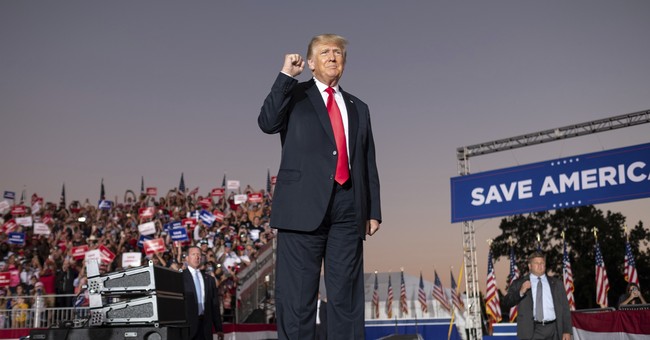 Bruce Springsteen’s song is about being swept away by the passion of the moment, not unlike Donald J. Trump was during his presidency. Like many of you, I was highly disappointed that Mr. Trump didn’t win the 2020 presidential election. Most of us believe it was stolen by Joe Biden’s hostile and corrupt handlers who had Joe prevaricate to The Washington Post that it was time for the nation “to heal” after the Trump years.

Thelonious (a nom d’ plume) explains in American Greatness, “…Trump is primarily responsible for raising the consciousness of ordinary Americans regarding pervasive institutional corruption and lighting the fuse of an American First revolution to take back the country from an elite leadership class that had betrayed their [voters’] interests for decades.”

In all, 159,633,396 votes were cast in 2020 for President of the United States, by far the largest voter turnout in U.S. history; the first time more than 140 million people had allegedly voted. This number is made far less credible by the fact that Mr. Biden campaigned significantly less than Trump or even a sickly Hillary Clinton had four years before. Biden’s conspicuous cognitive decline to everyone but party officials and the mainstream media made him an even less articulate and credible candidate than Madam Clinton in 2016.

A generally apolitical Gallup poll presented a week ago that, “a dramatic shift over the course of 2021, from a nine-percentage-point Democratic advantage in the first quarter to a rare five-point Republican edge in the fourth quarter.” It turns out that the only other time Republicans had a larger advantage was in the first quarter of 1991, after the U.S. victory in the Gulf War led by then-President George H.W. Bush.” A great many conservatives would like to credit President Trump’s four years in office and Dementia Joe’s myriad failings in his first year in office for this seismic shift in public opinion, and new opportunity.

The dismal performance by Biden and his administration have animated the Republicans base and maybe even won over some conservative Democrats. But that does not a Republican in the White House make in 2024. One year ago, the Department of Labor reported that officially 10.1 million people in the U.S. were unemployed. Employment has decreased the most in the blue states of California, New York, Massachusetts and Hawaii, supply chains have no links, and China and Russia continue to laugh at us.

Safety has also been a big concern with at least 16 U.S. cities experiencing record homicides in 2021. Residents have been escaping to red states like Florida and Texas in droves. The New York Times has called it the “Blue State Diaspora.” The problem for these red state destinations is that most Democrats migrate, oblivious to the fact that it isn’t so much the state they are deserting but the politics there that has made them hell-holes. Sadly, they are very likely to vote blue when they get to their new state of residence.

There must be something about being a registered Democrat that makes one oblivious to the consequences of voting that way. Ron DeSantis, who has been a Godsend to Florida residents since he was elected, only beat progressive Andrew Gillum by 32,463 votes. In March 2020, Gillum who Democrats across the state favored and voted for, was found unconscious in a Miami Beach hotel according to police and fire rescue crews were called to his room about 1 a.m. where they found him unconscious with Methamphetamine and attendant drug paraphernalia.

Be Careful What You Wish For

Many people are hoping that Mr. Trump will be placed on the Presidential ticket for the 2024 election. That would be a grave mistake. His real value to the GOP and America would not be as the front runner but as the manager for the next conservative president. He has a proclivity for appealing to mass audiences, but as Jim McCoy and I wrote after Trump’s first debate with the then hopeful future president, Mr. Trump has to get out of his own way to be not only scintillating, but also effective—he had to keep his responses “simple, stupid.“ Sadly, we know that that is beyond Mr. Trump’s inclination. He has to be the biggest, best, most wonderful person on stage.

Still, a December Yahoo News/YouGov poll showed “just 22% of voters want Biden to launch another White House bid and 27% want Trump to try for a second term in 2024.” Now we know that when polling firms partner with media companies, the odds will always favor Democrats, but these results clearly show that Americans are looking for fresh national leadership without the baggage Trump and Biden carry.

Mr. Trump would make an invaluable “producer” for a strong Republican candidate like Ron DeSantis or Kristi Noem. My bet is, however, that he couldn’t stand to have someone else in the spotlight even if it meant winning back the White House. As Thelonious concludes, “Trump broke the Republican establishment mold in many ways, but perhaps the most important lesson of his stunning takeover and transformation of a complaisant and corrupt GOP was the example he gave for those who recognize that preserving the republic will require significantly more than election-year posturing and feckless accommodation of the woke, America Last agenda and rhetoric of the Left.”

DJT will be most valuable to conservative America if he can fight his ego by stepping back and working behind the scenes to bring a real, conservative person with political experience and credibility to the front and help orchestrate his/her success. Sadly, despite this reasonable assessment, there are probably two chances of this happening with Mr. Trump—slim and none and slim already left town.