Trump Should Respond to Covid Criticism by Using the KISS Principle

James McCoy
|
Posted: Sep 22, 2020 8:42 AM
Share   Tweet
The opinions expressed by columnists are their own and do not necessarily represent the views of Townhall.com. 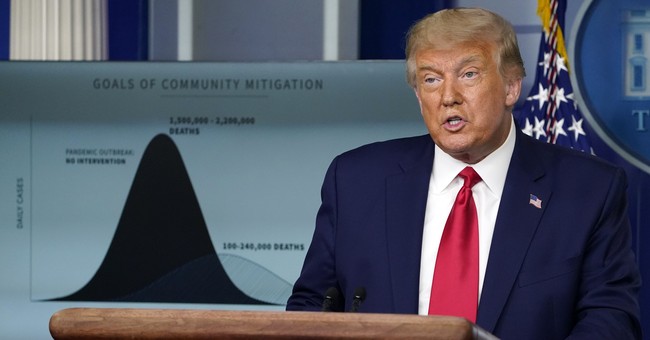 This column was co-authored by Loyd Pettegrew.

The liberal and socialist wolves, including many Millennials, most Gen-Zers and 95 percent of the press corps have been gathering the last few weeks. They are certain that the Covid pandemic has given them a great opportunity to defeat President Trump in the 2020 presidential election. The irony of this opportunity is that it really has no basis. It is founded on a common flaw of logic: the Big Lie. Every dictatorship that has ever existed has used the Big Lie ad nauseam.

Joseph Goebbels and the Nazi regime were especially adept at using false narratives.

By creating their own facts and stories behind the coronavirus the Trump haters aim to create doubt about the president's handling of the pandemic in the United States. For Biden and the liberal left, doubts can lead to anger and resentment toward the president, and that can lead to votes against him. Biden continues to throw out conjectural numbers and hypothetical statements that really have no veracity at all. All that Biden and the Democrats hope for is that the president will engage. Their tactic is reminiscent of the old, and perhaps familiar, Uncle Remus and the Tar Baby story published in 1881. In an effort to catch Br'er Rabbit and eat him for lunch, Br'er Fox creates a person-like puppet out of tar that is extremely sticky. All that is needed to set his scheme in motion and spring the trap is to have Br'er Rabbit touch the tar baby. Political chicanery using well-crafted sophistry can be just as harmful to political opponents as a tar baby to an unsuspecting rabbit.

The goal of the Biden handlers is to have Trump misspeak on some trivial point allowing them to air a false and deceptive narrative response. They maneuver to threaten the president’s ego and enmesh him in the thick of thin things. President Trump must not fall into their trap.

President Trump needs only to emphasize how he actually handled Covid-19 in the United States. His actions can be explained in four simple and completely defensible steps:

1. He placed an early ban on travel, first from China and later from the rest of the world and began marshaling all of the nation’s production capacity to provide for all needed lifesaving equipment and personal protection equipment.

2. He temporarily shut down the economy, and the nation, to slow the spread of Covid-19.

3. He admonished America’s Big Pharma to pull out all the stops to engineer vaccines that would protect our population.

4. Finally, and most importantly, respecting the strength and efficacy of our federalist system of government, he commissioned the governors and the citizens of each state to develop and implement a specific plan for containing the virus in their respective states and gave them federal funds to assist them in doing so.

No matter what blue state governors say, President Trump, like our founding fathers, feels it unwise to micromanage the citizenry, especially from the federal government level. He has faith in America and in the American people. This is what makes America great. These four actions and his beliefs are all President Trump needs to say in response to the Biden camp’s false claims.

As one might expect, the false narratives and fallacious interpretations (the Big Lie) Joe Biden is using to attack President Trump on Covid-19 is not the only tar baby fashioned by the MSM, liberal Democrats, and radical socialists. Biden's assaults against President Trump for "alleged" derogatory remarks about U.S. troops buried in cemeteries in Europe goes well beyond despicable sophistry. Biden speaks as if the comments are factual, even though they come from an anonymous source and have been refuted by many actual witnesses to what was said by the president. Trump should summarily dismiss Biden's treachery and just remind audiences to closely exam the differences between what he has done for current members of the United States military and veterans affairs, and what Biden and Obama failed to do for them. The difference will speak loudly.

Trump must not over-talk his response to these political tar babies and follow the KISS Principle—"Keep it Simple, Stupid" especially when giving honest sound bites to the dishonest liberal left media and the socialist oriented Harris-Biden ticket.

His presidency and America’s future depends on his discipline.