Factors that Could Lead to Obama's Downfall 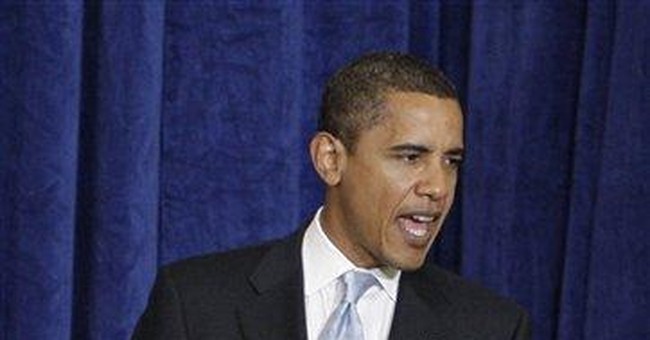 Change is an effective mantra in elections following two consecutive terms by one party in office. That is especially the case when the current officeholder is unpopular and the economy is weak. Barack Obama has that as a tremendous advantage in this race and recent polls breaking his way show it, but there are some significant factors that could still lead to his undoing.

When you look at the unpopularity of the current administration, the financial crisis that has overshadowed all other issues, the fawning media and the promise of a charismatic young figure offering change, it would appear this race is over. In fact, it would not be surprising if that candidate were leading by twenty points by now. Prospects are certainly looking good for an Obama win at this time, but there are a few factors that can still work in John McCain’s favor. Obama’s liberal voting record, his far left associations and the fact that Democrats control the Congress could all still cause trouble for Obama.

Obama is spending significantly more in my state of North Carolina than McCain, so I see a lot of Obama ads. One I saw several times this week was incredibly reminiscent of some Bill Clinton ads from 1992. I remember the Clinton ads because even though I opposed him, I was impressed by how good and how persuasive they were. Bill Clinton sat in what looked like could be a living room, or perhaps a large homey office, with natural lighting, and talked directly to the camera. He told voters that he was for a middle class tax cut and for “ending welfare as we know it.” I couldn’t argue with either of those ideas. I knew enough about the Democratic party at the time to know it was pretty unlikely that would happen, but I had to admit it sounded good.

When Clinton promised those things, the economy had already begun, and was maintaining, a steady recovery. That didn’t stop him from referring to it as the worst economy in 50 years, though, and the nation bought it. Now we have an economic situation that both candidates agree is one of the most dire our country has faced. In spite of the fact that Democratic policies are largely to blame, the unpopular sitting Republican President and his party are going to be saddled with the majority of the blame. Those in the media will ensure they are, regardless of whether or not they are deserving of it.

In the Obama ad I have seen many times this week, he is sitting in a setting very similar to the one Bill Clinton used in 1996. Also like Clinton, he talks directly into the camera and promises tax cuts for the middle class. Will this approach be as effective for Obama as it was for Clinton?

A big difference between Bill Clinton and Barack Obama is that Clinton could credibly claim to be a moderate. He was a governor from a southern state. Southern Democrats are sometimes just as conservative as their Republican counterparts. Barack Obama is from Chicago and he has an unbelievably liberal voting record both as a state legislator and in the United States Senate. Barack Obama has voted against tax cuts or for tax increases 94 times. Obama has a liberal track record that should set off voters’ alarm bells. Why should anyone believe he would now cut taxes when he has consistently opposed them for so many years?

Bill Clinton promised tax cuts, but even in an economy that was recovering nicely, he came back to voters barely a month in office and said that in spite of working as hard as he had ever worked, he was not going to be able to deliver them. There are certainly many excuses Obama could find to back out of his tax cut promise, but even if he did come through on it, there is another problem with it. Obama’s tax plan is hard on small businesses. Even though many lower and middle income individuals would see less taxes personally, small businesses would face a bigger tax burden. Those small businesses employ lower and middle income people. If voters understand that the same tax policy that might allow them a bit more money in their refund checks could also put them in the unemployment line, they might not be so eager to vote for it. The only way they will know that though is if John McCain can successfully make that point.

The only reason Bill Clinton delivered on his “ending welfare as we know it” pledge was because after vetoing it twice, he was told that he had to pass it or he would lose his re-election. He therefore signed a welfare reform bill that a Republican majority had passed. That brings up another factor that could work in McCain’s favor. Voters favor divided power.

The Democrats currently control both the House and Senate and barring some extreme unforeseen circumstances will not only continue to hold, but most likely increase their margins of control. Barack Obama has the most liberal voting record in the U.S. Senate. Most far left liberal policies are not terribly popular with American voters, but if the Democrats control the White House and all of Congress, voters will have essentially given them a blank check to do just about anything they want. One only has to look at the extreme liberal voting record of Barack Obama, as well as the liberal agendas and records of Speaker of the House Nancy Pelosi and Senate Majority Leader Harry Reid to see what they can expect in an Obama presidency.

It should be obvious to voters that an Obama presidency along with a Democrat-controlled Congress would result in the most liberal policies many of us have seen in our lifetimes or imagined in our wildest nightmares. Add to that the very real possibility that a President Obama would appoint two or three Supreme Court judges. There would be virtually no check on the power held by liberal Democrats and they would feel emboldened by the election to claim a mandate for anything they proposed.

This is a scenario that should frighten all but those in the most extreme left wing of the Democrat Party, but I don’t think it is a scenario that most voters have really considered. Those in the media are not going to write or talk about Obama’s extreme liberal voting record, just as they have not, and will not, investigate his associations with the likes of domestic terrorists, slumlords, and fat cats that fleeced Fannie Mae and Freddie Mac. It is up to the McCain campaign to draw that picture for the voters.

Those on the left will say it is fear mongering, even though for years they have warned of the extreme right wing and the fascist dictator state that America would become under Republican governance. They can’t do that with John McCain, who has so often been in opposition to conservatives. Since he would almost certainly have a Congress controlled by Democrats, any attempt to scare Americans with a rightwing fascist state is absurd.

Those on the left can neither credibly argue that a far left agenda would not prevail in an Obama administration. Barack Obama’s voting record is Exhibit One that is exactly what voters should expect. The case against Obama and complete Democrat control of government is bolstered by crooked associates of Obama such as William Ayers, Tony Rezko, and Rev. JeremiahWright. Additional clues to the leftist paradise that might exist under Obama can be seen in the thuggish attempts to silence his critics, whether it be his goons trying to shut down talk radio interviews or his operatives in state offices who are threatening to sue anyone who makes claims about Obama they deem false.

It would be no mystery to voters that an Obama presidency would be dominated by a far left liberal agenda if they were looking at the track records and associates of the candidates. Instead they are largely being shown an illusion of a modern day Messiah who is ready to unite the country and solve all its problems. They are being shown images of adorable children singing songs of worship and praise to Obama who is going to “rearrange” things to make them right. They are being given fluffy, puffy stories about the candidate by those who profess to be news reporters. The veil is so thin, really, if you know what stands behind it. Whether or not the McCain campaign can lift that veil in the final month of this campaign will determine the course of the country in ways we can only now imagine.