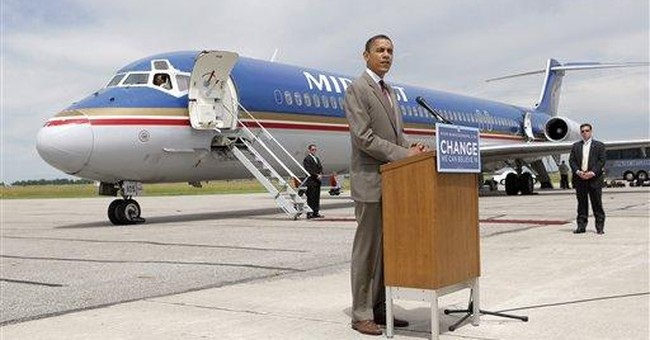 If the things I’ve heard said about America over the past eight years were true, there would be little reason to celebrate this Independence Day.

If life in America really was as it is portrayed in John Edwards’ “Two Americas” speeches, for example, it would be a horrible place to live. It would be a place where half the people were desperate and starving and the other half were greedy and gluttonous with little compassion for those less fortunate. If America were as despised around the world as those on the Left say, it would have to be a place no one would want to celebrate, much less emulate. Thankfully the America portrayed by some (especially in election years when the party in power is Republican) is not reality.

In America, government programs and non-government charities exist to feed the hungry and to clothe and house the poor. When a child goes hungry in America it is more likely to be due to the failure of a parent to exhaust all government and charitable resources available to them than due to an uncaring society. Billions of dollars flow from generous Americans every year to feed and care for the people of other nations as well. Some people do suffer in America, but here there is opportunity for better. That is not true for everywhere else in the world.

Even over the past decade, the American economy has remained incredibly resilient considering the country has experienced the attacks of September 11, wars in Afghanistan and Iraq, high profile cases of fraud in major American companies, the bursting of the “dot com” bubble and most recently record high gas prices (although the full effects of gas prices have probably not yet been seen).

Even though many around the world focus their anger and frustration at America, increased security at the U.S. border is needed to keep people from entering the country illegally. Many have risked (and lost) their lives trying to get to America. For all the talk about a loss of respect for America in the world, recent elections in places like Great Britain and even France show conservative, pro-America politicians winning. Despite all the election year rhetoric, America is still viewed by most as a land of almost limitless opportunity.

Christmas and Hanukkah and Passover and Easter are holidays celebrating and honoring events of religious significance, but most of the other holidays recognized in an official way in America relate to the history of the country (Thanksgiving) or to the ongoing efforts to protect the freedoms Americans enjoy (Memorial Day and Veterans’ Day). Of all the holidays honoring America though, Independence Day is the biggie -- and not just because of its exploding fireworks and hot dog sales. On the fourth of July not only do Americans celebrate the birth of their country, but they celebrate the act of declaring our independence.

In spite of the calls by many to be more like other countries and to relinquish more of our sovereignty and freedoms, most Americans still recognize (at least to some extent) the value of their freedom and independence and the importance to retain control of their own destinies. On September 11, 2001 Americans were reminded of the freedoms we enjoy compared to those in so many other countries and we were reminded that protecting and maintaining that freedom often comes with a high price. It is an ongoing fight taking many different forms. In addition to the fighting we do with bombs and bullets abroad, there are fights that are being fought right here at home. The continuing fight to maintain our freedoms at home most recently made front page news when the Supreme Court ruled on the District of Columbia ban on guns, but it is waged everyday all over the country in many different ways.

This Independence Day I will be tuning out the political rhetoric of those who would prefer the United States be more like Europe or Canada or anywhere else in the world. I’ll be celebrating the brilliance and the courage of our forefathers who gave us liberty and I’ll be thanking God and praying for those who are in harm’s way so that all Americans might freely enjoy life in this incredible place today. Happy Independence Day!

Barack Obama is encouraging his supporters to declare their independence from a broken public financing system by sending money to his campaign.

There is little I feel more strongly about than I am big on saying thank you to the men and women of our armed forces. I am really big on it in theory, and in writing, and in deed. When it comes to actually saying it though, forming the words with my mouth and making them come out sounding anything like what they sound like in my head, I am