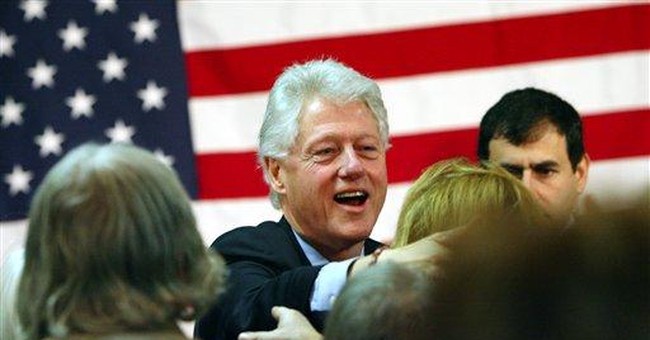 I had a feeling we would never get rid of him.  When watching the inaugural ceremonies in 2001, when Bill Clinton lingered, and lingered, and lingered a bit longer, I knew that not only would he not go away, but that the media wouldn’t let him.  This week the Vast Right Wing Conspiracy celebrated its ten year anniversary and the woman who coined the phrase looks poised to return with Bill Clinton to the White House.  Considering how reluctant they were to leave it, it is no surprise they are fighting so hard to return.  What remains to be seen is whether or not the public is ready for Clinton II.

For those who have forgotten, Bill Clinton made the tackiest of departures.

He sucked up the final moments of his presidency by delivering a 1000 word speech using the words “I” or “me” 56 times and instead of a single goodbye, embarked on a full-fledged goodbye tour.  I guess that’s what you do when you are convinced you are a rock star.  Jonah Goldberg writing at the time described the way Clinton “tried to deprive the new president the limelight” by quoting Mayor Daley.  “In the past, they shook hands, the (former) president went to a helicopter, and that was it. This was different. He had a rally at the airport, a rally in New York and a rally at his home. It was really different, really unusual," Daley said. "That's his style. He wanted two or three more parties."   Goldberg went on to quote Bill Clinton from the airport rally: "You see that sign there, 'Please Don't Go'? I left the White House, but I'm still here. We're not going anywhere."

When Bill Clinton said “we’re not going anywhere” he certainly wasn’t kidding and soon the Clintons might just be returning.  Consider the current campaign as the reunion tour.  The old gang is back together and looking to play for the American people.

In the column quoted above, Jonah Goldberg went into the details of the final days of the Clinton soap opera presidency, including the pardons, the taking of White House belongings, and the deal with the independent counsel admitting he lied in the Lewinsky affair.  Goldberg wrote of the presidential saga being over,  “I have no doubt that Bill will continue to lie and exert his will to power in an effort to remain the center of the universe, but fortunately for me, I don't have to write about it anymore. I can no longer muster the hate to do it, because he doesn't matter. He is now just an epigram on a dying feeling.”  Unfortunately, only act one of the saga was over and Bill Clinton does still matter.

Lest anyone forget the drama of the Clinton years, the former president is reminding them.  Bill Clinton has taken on the role of attack dog.  Tom Daschle who is now supporting Barack Obama said Clinton’s behavior is unbecoming of a former president, and Rep. James Clyburn of South Carolina said he needed to "chill a little bit" on the attacks.   Maureen Dowd said of Clinton’s role in his wife’s campaign, “Bill's transition from elder statesman, leader of his party and bipartisan ambassador to ward heeler and hatchet man has been seamless - and seamy."   I would argue that the “seamy” has always been there.  Any member of the Vast Right Wing Conspiracy in good standing can rattle off a half dozen or more examples of seamy Clinton behavior without batting an eye.  Whitewater, Travelgate, FBI Filegate, magically appearing subpoenaed billing records, missile technology to China, Johnny Chung and bags of campaign cash are just the beginning of a long list of Clinton administration scandals that come to mind without even naming Monica or Paula or Juanita or Kathleen.

Whether or not Hillary Clinton is elected President will likely come down to how the voters remember the Clinton years.  If they remember the Clinton years as the most wonderful time in the history of mankind, as many in the media portrayed it, they might decide to give the Clintons a repeat performance.  Of course, perception does not match reality in this case.  In reality Clinton left office handing George W. Bush an economy slipping into recession, a track record on terrorism that allowed the 9/11 masterminds to plot the most deadly attack on U.S. soil and a military cut to unacceptable levels.  But in politics perception is reality and the image left in the public’s mind is largely one of peace and prosperity under the Clinton administration.

If the voting public thinks first of the scandals and the “bimbo eruptions” when they hear the name Clinton, they might not be so eager for a return to the drama.  Those who think there is no reason to believe a Hillary administration would come with all the soap opera of Clinton I would do well to listen to Gregory Craig, a former aide to the Clintons.  Craig now works for Barack Obama and recently raised a  question voters will need to consider, “Events raise the question, if Hillary’s campaign can’t control Bill, whether Hillary’s White House could.”  If people are honest, I know how most would answer that question.  That might just make the difference and be enough to derail the second act of the Clinton show.