Dallas and the Battle for the Remains of Humanity

Liz Harrison
|
Posted: Jul 09, 2016 12:01 AM
Share   Tweet
The opinions expressed by columnists are their own and do not necessarily represent the views of Townhall.com. 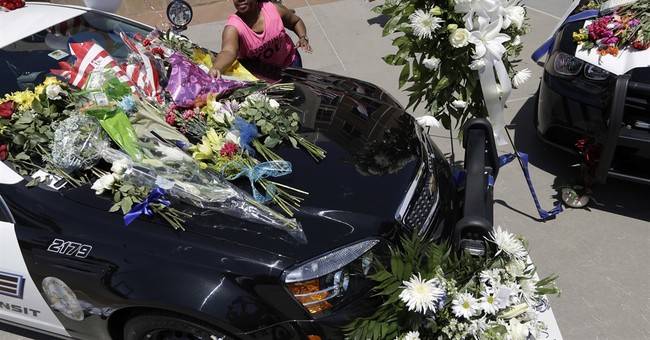 “What's wrong with me? I can't stop feeling like crying.”

“I'm afraid. Isn't there some way to stop all of this?”

“How can there be so much hate?”

Those are just a few of the messages that were waiting for me, and have been spilling into my inbox, IM's, and text messages since the shootings in Dallas last night. Most of them have been from people who come to me for guidance in their personal lives, but a few were from people from the world of politics. Unfortunately, the nature of the ones from the political class were mostly driven by anger – that is from both sides of the aisle. Both sides are just looking for any opening to blame the other. And there lies the real problem.

Caleb Howe at RedState.com at least attempted to point out something that has been missing in all of the political battles we have been participating in, or watching for the past several years. It has been escalating, and as the debates have degenerated into virtual screaming matches (with neither side listening to the other), something important has been dying.

The answers I have been giving to the people asking questions like the ones offered at the beginning here show the truth that isn't sexy enough for headlines. There is nothing wrong with the people who feel like crying – if anything, they are probably the most sane individuals in our society today. They are lucky enough to still have their sense of empathy. The people who are afraid also are better off mentally than the people who are causing their fear. I'm not referring to the criminals causing fear here, either. Most of the people who are saying to me that they are afraid today have been talking more about the vicious partisan wars of words than the shooters. It's not that they aren't afraid of shootings. They are just more afraid of the hatred they see daily from friends, family and social media acquaintances.

That brings me to the last question, and the one that has been the toughest to answer. How can there be so much hate? Unfortunately, there is no simple answer to that, nor is there an easy remedy for it. The sheer volume of hatred out there is a large part of the reason why I have personally backed away from the blood sport of politics. I've had a few people suggest that I couldn't stand the heat, so I got out of the kitchen. It's a quaint adage, but doesn't apply. The truth is that I couldn't stand to look at myself in the mirror if staying meant contributing to the intellectual, moral, and emotional disconnect between “left” and “right.”

Howe is trying to point out that for the sake of political points, people are failing to be human. He's right. People are consuming the images of pain, cruelty, inhumanity, violence, and debasement like some consume pornography. Yes, I am suggesting that there is nearly a sexual appetite for it – lust, if you will. That is the embodiment of the hatred I've been asked about today, and for a very long time now. Why it has become so pervasive is complex, deeply rooted, and bipartisan. I'm mentioning that last word for one reason only, and that is the fact that so much hatred has been solidly fused to our political processes and identity as a nation.

There is no opportunity to point fingers here because everyone is guilty. Even the people who are simply upset with what they are seeing from everyone else bear some of the blame. They haven't spoken up against the hatred, but I do encourage them to do it when I can. I would like to say that I think the hateful people would actually be ashamed if anyone challenged them or simply asked them to stop, but I can't. As I'm writing this, I know some readers will undoubtedly become angry with me, and possibly take to the comments section to suggest that I'm just “soft”or some other less flattering terms that would mean more or less the same thing. I'm a proponent of free speech, so I have nothing to say against that. However, I will say that I reserve the right to say if someone is simply illustrating my point here – hatred has become a primary part of the political tool box.

It's a battle against human nature, since we're theoretically hardwired to hate and fear difference. That doesn't mean that we can't attempt to fight our less palatable instincts, and honestly, we're not fighting them at all at this point. We're feeding them. It's easy to show compassion for people who share your beliefs. The same goes for defending the rights of others. I regularly catch myself thinking less-than-charitable thoughts about many people I disagree with, and have tried to restrict myself to speaking out only on ones in the public sphere. Even that is becoming limited for me, though. It is better to deal in ideas, than in personal attacks.

Texas Governor Greg Abbott stated how he sees this problem in an open letter to Texans that was published in the Dallas Morning News. In part:

“Every life matters. With each innocent life lost, we lose more of our humanity. It is time for us to unite as Texans, as Americans, to say no more. No more will we tolerate disrespect for those who serve. No more will we allow the evil of hate merchants to tear us apart... In the coming days, there will be those who foment distrust and fan the flames of dissension. To come together – that would be the greatest rebuke to those who seek to tear us apart. There is far more that binds us together. We see that great strength in times of tragedy, in times of great need.”

Perhaps the solution to the problem is to show that great strength not only in times of great need, but also every day.