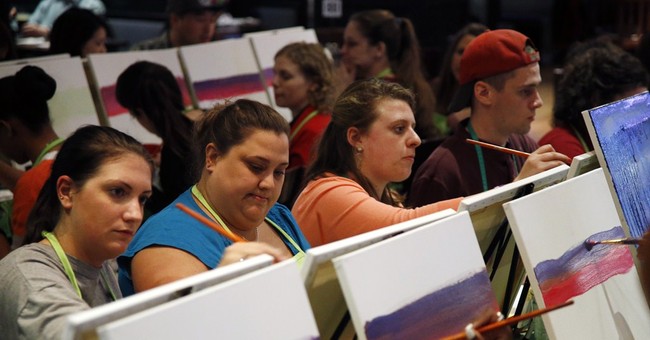 While it was shocking enough to see a report that the University of California San Diego campus actually had a class that required students to appear in class in the nude, it's at least a little interesting that the report didn't even mention the fact that the school actually does have a harassment policy just like every other campus. Professor Roberto Dominguez, an associate professor in the Visual Arts department of the school, theoretically was breaking at least three clauses of the UC San Diego policies on non-discrimination and harassment when he decided it was a good idea to state that students had to attend class in the nude for part of their final exams or fail. In all fairness though, the third violation might not have applied if he hadn't opted to strip himself.

Let's start with the subsection on “Harassment in General” first, which states:

“Sexual, racial, and other forms of harassment are defined as follows: conduct that is so severe and/or pervasive, and objectively offensive, and that so substantially impairs a person's access to university programs or activities, that the person is effectively denied equal access to the university's resources and opportunities on the basis of an individual's race, color, national or ethnic origin, alienage, sex, religion, age, sexual orientation, gender identity, marital status, veteran status, physical or mental disability, or perceived membership in any of these classifications.”

Dominguez argues that the syllabus clearly states the requirement, and that should prevent students that have no desire to engage in the activity from taking the course. That would be fine, if the course was not a prerequisite for any other course, which it is. So, that establishes the fact that students could have to enroll in this course even if they have objections to attending class in the nude. As for how that could run afoul of the clause above, this would exclude at the very least Muslim female students from participating in this course, and therefore whatever academic program that requires it. It could also be found objectionable for other students based on religious beliefs, including some Christian denominations. Additionally, married students with spouses that would object to having their mates seen in the nude by an entire classroom would have standing to make a complaint under this clause. Because the language of this clause includes “perceived membership” in these classes, it's feasible that anyone could initiate action against this professor, simply by claiming that they “think” they have a mental disability that would interfere in their safe participation in the final.

In the “Sexual Harassment and Sexual Violence” section:

While there isn't anything in there about “forcing students to strip,” we'll just take a quick walk into the real world for this one. Apparently while UC San Diego is just fine with having a professor require students to attend class sans clothing, it's fair to guess that if any of the staff of the school were told by a supervisor to do the same in an office somewhere on campus, they'd be in court filing sexual harassment charges in record time. Maybe someone needs to remind the administration that the campus does exist in the real world, in spite of how much they might wish it otherwise, and that students have the same rights as their staff.

“UC San Diego's Policy on Conflicts of Interest Arising out of Consensual Relationships addresses the potential ethical and legal issues that arise when individuals develop romantic or sexual relationships. In addition, the UC Regents have approved a systemwide faculty-student relationship policy that prohibits a faculty member from becoming romantically or sexually involved with students for whom the faculty member has or should expect to have supervisory responsibility.”

Dominguez has been teaching this course for 11 years, or at least has been employed by UC San Diego for that period time. The real question is why in the world did it take this long for anyone to raise an objection? Either this is a new requirement, or California really may be completely hopeless!