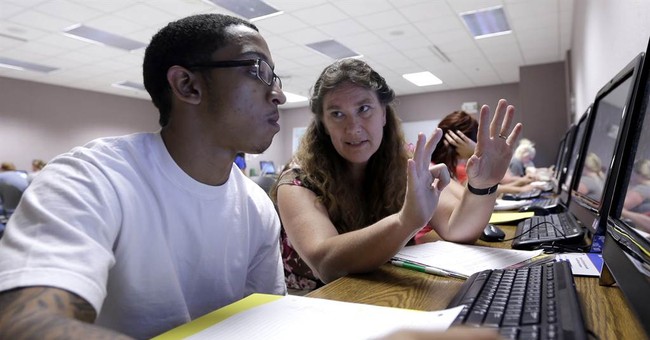 Education in America is arguably one of the most contradictory institutions in existence. Teaching as a vocation is both under and over valued, depending on which level one is considering. Many Americans are quick to protest wage and benefit increases when it comes to teachers in public schools. Primarily because it is a readily seen expense on the local level. However, the same issue causes calls for more Federal or State dollars in schools, ostensibly to improve their performance. Once the issue moves on to collegiate level, there are cries about the high expense of tuition in state and private four-year colleges, but instead of insisting on reductions, again there is typically approval for Federal and State subsidies in the form of student loans and grants. The bottom line is that government involvement in defraying the expense of education on all levels creates a false determination of the real dollar value of the system as a whole.

While most would agree that in order to succeed in today's society one needs post-secondary education, most people probably do not stop to think about why this is the case. Beyond the technological advancements we have seen over the past 50 years, there is another issue that has arguably devalued the high school diploma, and for that matter even college degrees.

Schools do not teach students how to survive in society. The irony is that the students that are often derided for being too stupid to succeed in pre-college courses probably are more prepared for the real world than their college-bound peers. Students that choose vocational training courses while still in high school at least will graduate with starting knowledge and experience in a marketable trade. The result is that the majority of high school students graduate with an incomplete education, at least in terms of marketability in the working world. Couple this with the fact that a diploma is free with the exception of ones acquired from parochial or private high schools that actually charge tuition, and it can be argued that the diploma has been permanently devalued.

The latest grand idea of the Obama administration is to make community college free for students that are willing to work for it. Of course, that “free” offering is estimated to cost taxpayers $60 billion over ten years, and it's safe to assume that initial number will increase, if this idea becomes a reality. But for now, that is all it is – a nebulous idea that is nowhere close to becoming an actual program. It doesn't bode well for the administration when even leaders within the community college system are giving it mixed reviews. Regardless of the performance requirements proposed, the fact remains that this program is trying to fix a problem that arguably was created by the administration itself. Community colleges are generally affordable options for most students, thanks to existing grants and loans on both the federal and state levels. While it is too early to determine the exact impact of the ACA on community college students that work and study, it is likely that the new 30-hour-a-week limitation is having an impact, and will in the future if it isn't repealed.

That isn't addressing a problem with education in general that was mentioned here previously. Perception of the value of education is affected at least a little by how much it costs. Just as the high school diploma has been devalued, community college two-year degrees could suffer the same fate, more than they already have. With the exception of programs that leave graduates prepared to enter the workforce with needed career skills in two years or less, community college already is just a starting point on the road to another degree at another institution. Also, many students do not actually complete 2-year degrees if their plan is to transfer, especially if it is more favorable to transfer before graduation. The administration has also suggested that part of this program would require that community colleges somehow reduce the number of remedial courses offered on campus (or reduce the number of students enrolling in them.) How they are supposed to do this isn't stated for a very good reason, since this is beyond the control of the colleges. The problem with students requiring remedial courses is in the hands of high schools, not community colleges, that are simply providing what students need before attending a four-year institution. This requirement also implies that there would be more Federal intervention in the community college system, and that virtually guarantees that the schools would suffer from a loss of educational value and probably a radical increase in costs for anyone that isn't eligible for the “free” program.

The only real problems that community colleges have now has nothing to do with affordability, but with resources in general. Unfortunately, the Obama plan does nothing real to address those problems. There are many schools with wait lists, and many regions in the nation that are under-served for other reasons. If this administration was honestly wanting to make the community colleges available to more citizens, it would be talking about tax breaks for private citizens and businesses that choose to invest in expanding these schools. There would be talk about special provisions or perks given to public schools that allow community colleges to use their facilities at night and on weekends, to expand access. Maybe there would be talk about a government sponsored competition for technology companies that develop better educational software for radically expanding online learning in community colleges.

It's wonderful to see anecdotal evidence of the concept of free community college education, but in the end, even that doesn't really make a case for it. One thing that is not changing any time soon is that these institutions are often chosen by students that are unsure of what they want to with their lives. That means that taxpayers could be left paying for students that will not use the subsidized education to enter the workplace. Finding one's way in the world isn't something that should be a public expense.