Liz Crokin
|
Posted: Nov 05, 2016 12:01 AM
Share   Tweet
The opinions expressed by columnists are their own and do not necessarily represent the views of Townhall.com. 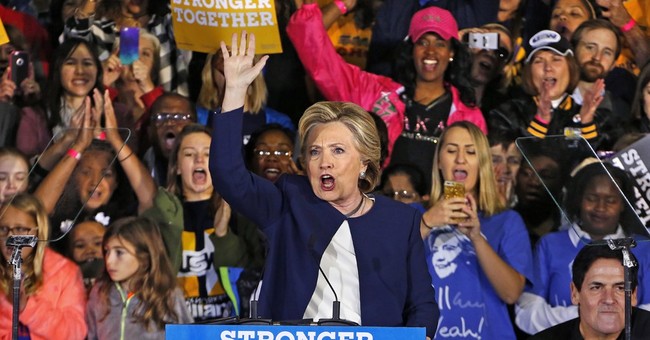 This is the first presidential election in my lifetime that is not about the two candidates or Republican versus Democrat. What a lot of people are missing about this election is that it’s about nationalism versus globalism, anti-establishment versus establishment, ending the unprecedented and widespread level of corruption in the government, restoring law and order in this country and putting American citizens first, not illegal aliens, criminals or refugees. Regardless if you like Donald Trump or not, if he’s not elected our country will be destroyed as we know it. It will turn into a Third World country and the ongoing FBI investigations into Hillary Clinton alone – especially if she’s indicted -- will weaken this country, put it into total chaos and jeopardize our national security. I truly believe to the core of my being that this election is one of the greatest battles of good versus evil in history. Whether you like Trump or not, all freedom-loving Americans have a moral obligation to vote for him if you truly believe in doing what’s best for this country and its wonderful citizens.

I’ve worked on two presidential campaigns: Gov. John Kasich’s first presidential run in 1999 and President George W. Bush’s first presidential bid as well. Kasich asked several students and I to spend our summer then to work on his campaign doing grassroots work in Iowa to help him win the Iowa Straw Poll. I was a big fan of Kasich and truly believed in his message. So I gave up my dream job to intern for Bill O’Reilly in New York at Fox News Channel that summer to help Kasich. I spent months making phone calls, planning campaign events and spent many days in my car often for three-plus hours to drive to all over the state of Iowa for his events on my dime.  We all worked hard to secure a success for him at the Iowa Straw Poll and made a lot of sacrifices. However, just a few days before the straw poll in a very self-serving move, Kasich dropped out. He took a bunch of us to dinner and gave a sappy speech as he attempted to shed crocodile tears stating that the numbers were just not in his favor to win the straw poll. In reality, we will never know how he would’ve done since he dropped out. The real reason he made this move was because he hoped it would get him on Bush’s good side and lock down a position for him in a Bush Administration. I was devastated. I had turned down my dream job and done all that hard work for nothing. That’s when I first learned how phony and corrupt most politicians are. Many of them don’t give a damn about the issues or the people -- they just will do what it takes to get money and power.

Thanks to Wikileaks, the Project Veritas videos and a very small number of reporters who do real investigative journalism, the mask has been lifted and we are finally learning how deep and far the corruption goes in Washington with Hillary Clinton at the helm. This is what a Clinton presidency versus a Trump presidency will look like:

Globalism versus nationalism: Clinton said in in one of her private speeches that she dreams of “open borders”. She also wants to increase the intake of Syrian refugees by 550% and give amnesty to illegal aliens. What the mainstream media has not reported is that all the countries in Europe who have brought in refugees are in total chaos and destruction. Refugees are committing all kinds of crimes and terrorist attacks on a daily basis in European countries such as Germany, Belgium, France, England, Greece, Denmark and Sweden to name a few. Since Sweden and Denmark started bringing in Muslim migrants, they’ve become the rape capital of Europe and Germany has had reports of over a thousand sexual assaults committed by Muslim refugees in some instances just in one day such as New Year’s Eve in Cologne. This should not come as a surprise because most of the refugees are coming from countries where rape is not only legal; it’s the victim’s fault if a woman is raped. The bigger picture that the mainstream media also does not report, is that most of these alleged refugees are fit and fighting age men – not poor women and children -- who have no intention of adjusting to the Western way of life. Their goal is to spread Islam and instill Sharia Law around the world. The refugee program is funded by one of Hillary’s biggest donors George Soros. It’s no secret his goal is to destroy sovereign nations by opening their borders and causing chaos by flooding their welfare systems to bankrupt each country in order to further the New World Order plan for a one world government. The intentions behind Soros and the globalists are outright malicious. Under a Trump presidency, he will close America’s borders and stop the influx of illegals into this country especially the criminals and refugees who can’t be properly vetted – which the FBI admitted publicly and even Clinton wrote this in a leaked e-mail – to weed out jihadists. In effect, this country will be safer, there will be less terror attacks and there will be more money saved that can be used to help our own citizens such as our beloved veterans and our homeless.

Establishment versus anti-establishment: We now know that Clinton used her position of power not to serve the best interest of this country but to line her own pockets with the Clinton Foundation as a front. As Secretary of State, she made decisions not based off of what was best for this country; she made decisions based on who would donate the most money to the Clinton Foundation and pay her and her husband the most amount of money for speeches in exchange for favors. This is why Clinton set up her private server and destroyed 33,000 e-mails. She knew she’d be conducting illegal activity and she put our national security at risk in doing so. This corruption will continue under a Clinton presidency further putting our country at risk and her needs before what’s best for Americans. Also, we now know that due to Clinton’s reckless behavior, her servers were hacked at least five times by foreign intelligence agencies. This means if she’s elected, our enemies could use those hacked e-mails to blackmail her. Clinton claims Trump can’t be trusted with the nuclear codes; yet, it’s been proven she can’t be trusted with even low-level classified information. Like it or not, treason is heavier than “Miss Piggy.” Trump intends to stop the rampant corruption in Washington and he’s laid out a plan to drain the swamp. He will push for a Constitutional Amendment to impose term limits for members of Congress. Trump would also institute a 5-year ban on administration officials lobbying the government after they leave their jobs. He would also ask Congress to institute its own 5-year lobbying ban on former congressmen and congressional staff. This is why so many Republicans do not support Trump. They know that if Trump is elected, all the perks and the shady backroom deals they make to further themselves without their constituents best interests at heart will stop.

Clinton wrote her college thesis on Saul Alinsky; I did my college research project on all the Clinton scandals and this was about 20 years ago. Then, I was shocked how corrupt they were and they’ve been involved in countless scandals ever since. I finally got a chance to cross paths with Sen. Clinton in the White House in 2001 since I was there working for the White House Press Corps as an intern at the time. She was leaving a meeting with President Bush about 9/11 and some reporters asked her what her husband thought about the terrorist attacks. She coldly snapped at all of them and said in an icy tone that they should not be asking her that question and yelled at them to call his office. Ever since I started writing stories exposing Clinton, I have dealt with threats, harassment and at times even felt that my life was in danger. It’s no secret that anyone who dares to expose the Clintons get threatened, vandalized, their pets killed, their houses burned down and dozens have died in mysterious accidents. Just on this information alone, it boggles my mind that anyone could vote for someone so wicked to the core. When Trump says she’s a nasty woman and she has evil in her heart, he couldn’t be more right. On the other hand, despite the lies the mainstream media tells about Trump, I’ve had the privilege to meet him and cover him for many years as a journalist. Trump and his family are wonderful good-hearted people who have done so much to help so many throughout the years. Trump’s a billionaire who does not need to run for president and he’s risking his life and taken incredible abuse by doing so. He told Oprah years ago he would only run if things got really bad and then he would feel a moral obligation to do something about it but it’s not something he particularly wanted for himself.

You may not like Trump, but he’s right to say that this election is bigger than him: it’s a movement. The people are sick of government corruption and good everyday hardworking Americans want to take their country back. There’s only one candidate who will make America great again and that candidate is not under multiple FBI investigations. It’s America or Her. I’m with America.