Liz Crokin
|
Posted: Aug 27, 2016 12:01 AM
Share   Tweet
The opinions expressed by columnists are their own and do not necessarily represent the views of Townhall.com. 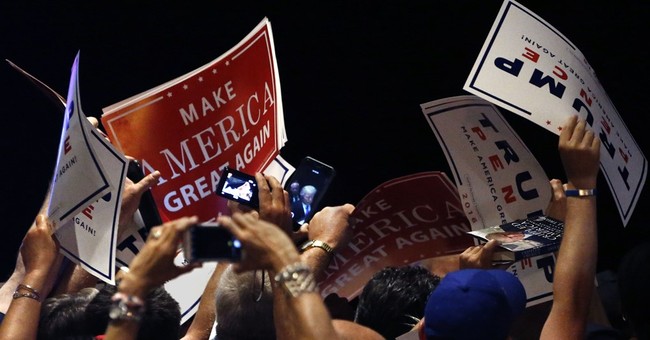 When I went to my first Trump rally in California earlier this year I noticed two male protestors holding up signs with a picture of Donald Trump next to a Nazi flag that read: “Stop Nazi Trump.” What I found so shocking about this was not the sign itself but the irony of this picture. As they held up these signs, hordes of protesters around them spit, swore and physically pushed Trump supporters -- including women and children – as they walked in and out of the event. The irony is that these protestors that are so quick to cast Trump as Adolf Hitler are using the same violent tactics that Hitler’s Brownshirts, aka the SA, executed against Nazi opponents in the years leading up to the German dictator’s rise to power in 1933. The radical groups that support Hillary Clinton are using these same methods of fear, violence, ridicule and intimidation. Her supporters are blindly endorsing the one candidate that is manipulating them to use the same criminal tactics Hitler’s followers applied; yet, they are too ill informed to realize this. They’ve been brainwashed to believe that Trump is the bad guy.

The Brownshirts, originally named the Strurmabteilung, which means Storm Department, attracted many unemployed and unhappy young people. Their purpose was to provide protection for Nazi meetings and rallies and also to disrupt the meetings of opposing parties and to fight and attack members of these parties. They quickly got a reputation for being a well-organized gang of violent thugs. Hitler’s Brownshirts would roam the streets at night and beat up anyone who openly opposed Hitler.
CARTOONS | Al Goodwyn
View Cartoon
We’ve seen this kind of violence directed at Trump supporters often at Trump rallies; yet, incredibly, Trump and his supporters are usually blamed. Even though there’s yet to be one documented incident of a Trump supporter causing violence at a Clinton rally, the left repeatedly rationalizes the hundreds of examples of violence launched at Trump supporters.
The most recent acts of violence occurred Friday evening at Trump’s rally in Minneapolis. A group of about 300 plus protestors spit on Trump supporters, shouted profanities at them, gave his supporters the middle finger, burned American flags and Trump signs and one protestor repeatedly punched a Trump supporter. Furthermore, a video surfaced of a group of male protestors taunting and chasing an elderly woman as she exited the venue. The agitators even attacked Trump’s motorcade as it exited the property.
On March 11, protestors caused Trump to cancel his rally in Chicago citing security concerns after mobs of agitators surrounded and infiltrated an arena as the event was scheduled to begin. OnMarch 29, a teenage girl punched a senior citizen supporting Trump at a rally in Janesville, Wisconsin. On April 28, at least 20 people were arrested outside of a Trump rally in Costa Mesa, California where they destroyed a police car. On May 24, protestors targeted police and their horses in addition to Trump supporters at a rally in Alburquerque, New Mexico. Police confirmed that protestors threw rocks and bottles at their horses knocking down at least one horse. On June 2, protestors at a rally in San Jose, California physically attacked several Trump supporters. Protestors cornered and threw food and an egg at a young woman and another protestor hit a young man in the head from behind leaving him covered in blood.
Dutifully following in the footsteps of the Brownshirts, Clinton supporters are not limiting these acts of violence to rallies. Trump supporters are attacked in public places at gatherings not even related to Trump and often on social media. In July, a patron shot a Trump supporter in the leg after he revealed his support for the real estate mogul at a bar in Cleveland.  Last week an elderly cancer survivor was attacked at a garage sale for wearing a “Make America Great Again” hat. The attacker punched him in the face and knocked out a tooth. Both attackers in these incidents were arrested.
Many of the protestors that are making these kinds of attacks on Trump supporters are from radical groups such as Black Lives Matters. Black Lives Matter is largely funded by one of Clinton’s biggest donors, George Soros. It’s been revealed through ads on Craig’s List that some of these protestors are paid to go to Trump events proving this is a very carefully coordinated effort by the left to silence and scare Trump supporters.
Clinton’s mentor, political activist Saul Alinsky, outlined similar tactics the Brownshirts used in his book, “Rules for Radicals”, to correct what he believed to be a power gap between the rich and the poor. The strategies he preached are a simplified version of Vladimir Lenin’s scheme to spread communism. Lenin referred to his converts as “useful idiots”. Alinsky preached that change should come about through relentless agitation and trouble making. Clinton was a friend of Alinsky and wrote her thesis about him as a student at Wellesly College. Similar to the behavior of the Brownshirts, Alinsky encouraged his followers to pursue guerilla warfare that was void of any civil conversation. He preached that civil discourse must be depicted as evil and opponents are to be ridiculed and demonized, end of story. Alinsky discouraged people from debating the rational facts or the ethics of an issue.
Some of Clinton’s radical supporters are following the Alinsky model and using violent methods the Brownshirts used to help her get elected – but where does that leave them? A lot of these protestors get arrested and are left with a criminal record…. and for what? To help a candidate get elected who only sees them as political pawns? If this wasn’t the case, why isn’t Clinton condemning the relentless violent attacks against Trump supporters? Also, some of her allies in the media have taken on a blame the victim mentality to excuse the violence. In an interview, the girl who was egged at a Trump rally said she defended herself against the protestors. Instead of condemning the thugs who attacked her, the media twisted her statements and boasted headlines such as this one ripped from CNN: “Egged Trump Supporter Admits Taunting Protesters”. MSNBC analyst Andrea Mitchell took it a step further and blamed the attack on Trump.
The end goal for Clinton and her supporters is the same end goal the Brownshirts had: to shut down anyone who expresses dissent. In Germany these violent methods worked; people from opposing parties became too fearful to speak up so they remained silent. There’s no doubt Clinton supporters have silenced many people -- closet Trump supporters tell me this all the time. The good news is that the violent tactics from the left have not silenced the masses. Despite the abuse Trump supporters face everyday, they still come out in crowds of up to 30,000 to support him at his rallies. So just imagine what Trump’s rallies would really look like if no one were too afraid to support him in public. I wonder…
Sen. Ted Cruz Taunted by Woke Anti-Gun Activist at Restaurant
Sarah Arnold