Lisa De Pasquale
|
Posted: Apr 25, 2017 12:01 AM
Share   Tweet
The opinions expressed by columnists are their own and do not necessarily represent the views of Townhall.com. 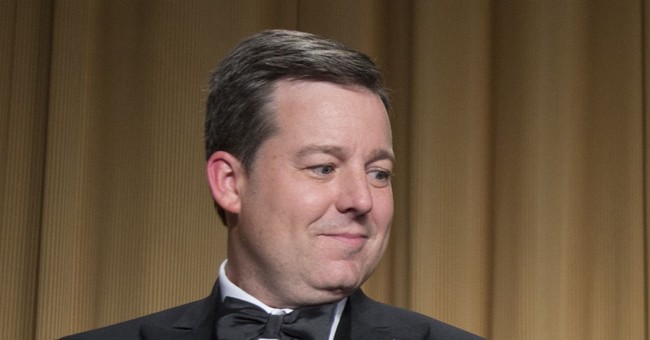 The affable Ed Henry has been at Fox News since 2011, where he has covered the 2016 presidential campaign, the NSA leaks, the 2012 presidential campaign, the Benghazi attack, among many other national issues.  In addition to being the network’s chief national correspondent, he’s also a frequent guest host on Fox and Friends and other popular shows.

If you follow Henry on Twitter, you know his penchant for pocket squares and love of baseball.  His first book, 42 Faith: The Jackie Robinson Story, is a biography about the baseball great, but is also much more.  Like Eric Metaxas’s book 7 Men, 42 Faith focuses on the faith and character that made him Robinson a baseball legend and hero of the civil rights movement.  Bestselling author (and a Dozen interview alum) Brad Thor said, “Ed Henry knocks it out of the park! 42 Faith: The Rest of the Jackie Robinson Story is a home run. Baseball, bravery, and the best of who we are as America move this electrifying, true tale of courage to the very top of your must-read list.”

The De Pasquale's Dozen asks political figures, free market-minded writers and entertainers to take a break from politics and talk about their pop culture obsessions.

I would channel Humphrey Bogart and say, "I was misinformed" when the Yankees initially rebuff my claims that the manager's job was promised to me. (See answer #3)

Barbara Maher was the teacher who oversaw the newspaper at St. John the Baptist High School. She was and is patient and caring and helped fire me up for a career in journalism.

I grew up wanting to play first base for The New York Yankees. At my age I will bow to pressure and accept the manager's job when Mr. Girardi leaves on his own accord, if you're reading this Yankees President Randy Levine.

4. What canceled show would you put back on the air?

“The Honeymooners.” My Dad and I have memorized almost every line.

Outside of all the outstanding programs on Fox News, "Billions" is really fun on Showtime and when this book tour is over I have to finally try "Ray Donovan."

My dad promised to get me a new baseball glove but then lost his job. I never said anything but then after he got rehired the first thing he did after getting the new paycheck was take me to the mall for a new mitt. Never forgot it.

Anything that makes a close family member happy, regardless of price. My daughter Mila loves music so I loved how excited she got when I recently got her Beats earbuds. My son Patrick devours sports memorabilia so I love surprising him with a signed NBA jersey.

8. What advice do you remember your mother or father giving you?

Stand up for yourself. Without that, this book would never have been written.

I just started "The Man to See," by Evan Thomas about Edward Bennett Williams and it's really good so far. Then "My Cubs: A Love Story," by Scott Simon, he is one of the best no matter what he writes.

10. What can politicians learn from Jackie Robinson?

Politicians in both parties could learn something about guts from Jackie. He was so fiery, so fearless, and he had to be. He was so far ahead of his time in shaking up the establishment that Dr. Martin Luther King Jr. said that he was literally a "sit-inner before sit-ins." Yet somehow Jackie had to be patient and kind regardless of all of the discrimination, which I think you will see in "42 Faith" had a lot to do with his personal faith. Finally Jackie, despite his clear talents (four-letter athlete at UCLA), was not a braggart. Despite being a pioneer, Jackie himself once wrote, "Somebody else might have ... done a better job. But God and Branch Rickey made it possible for me to be the one, and I just went on in and did the best I knew how." We can all learn from his grace and humble nature, not just pols.

“Henry Under Consideration for Yankees' Skipper, Dodgers May Enter Hunt Too”

12. Tell me about the moment you decided to enter the political news arena.

I was a student at the Washington Semester Program at American University in 1991. One morning I distinctively remember that I was just so excited to reach the Tenleytown Metro to make it to my internship with columnist Jack Anderson. For some reason I stopped in my tracks to take it all in right there in the middle of a parking lot and started yelling out how awesome this was. A college student telling the world that he was happy somehow really, really amused some much younger Catholic school students that were lined up to get into school for the first bell. So they started laughing out loud, and yelling random things at me. I didn't care if they were making fun of me, so I started high-fiving them and then rushed over to Wisconsin Avenue to catch the train. I felt like nothing was going to hold me back.